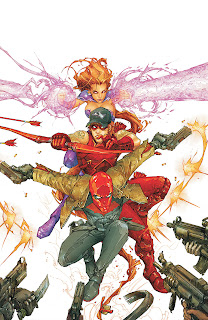 RED HOOD AND THE OUTLAWS #1
Written by SCOTT LOBDELL
Art and cover by KENNETH ROCAFORT
On sale SEPTEMBER 21 • 32 pg, FC, $2.99 US • RATED T
No sooner has Batman’s former sidekick, Jason Todd, put his past as the Red Hood behind him than he finds himself cornered by a pair of modern day outlaws: Green Arrow’s rejected sidekick Arsenal, the damaged soldier of fortune, and the alien Starfire, a former prisoner of intergalactic war who won’t be chained again.
As a loner, Jason has absolutely no interest in this motley crew of outlaws. So what’s he going to do when they choose the Red Hood as their leader? Find out in this hot new series from writer Scott Lobdell (WILDC.A.T.S, Uncanny X-Men), featuring art by rising star Kenneth Rocafort (ACTION COMICS)!

Jim: A true what the heck is this book. Red Hood, Starfire and Arsenal as a team book? Lobdell is usually underwhelming and Rocafort did some decent work on Madam Mirage I believe, but this is just an odd book. I have no clue as to the whys and wherefores of this group.
Gwen: Um... okay? I can sort of see Red Hood and Arsenal as sidekicks who, at one point or another, have gone bad. But Starfire? Is she just our token woman character for the series? I mean, I don't think she really qualifies as an "outlaw" unless I've missed something... I mean sure, maybe on a planet not Earth I suppose. What an odd concept.
Lee: I like Rocafort's art and I am glad he's breaking into the big leagues, more than he already has. But other than that I am not sure why this book exists.
Matthew: When did Jason Todd become a good guy again? And if he's not, why is Starfire hanging with him? From the cover this looks like an excuse to shoot things with guns or power bolts.
Thomm: A very curious endeavor. I find myself rooting for Starfire deciding these two are just dangerously stupid and throwing them off the planet altogether. She out powers them quite a bit. Really throws off the balance of the characters. 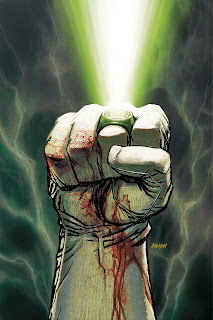 Jim: This book appears to have come through the latest retro-con unscathed. I was hoping to see a little more of Hal’s private life or see if he would ever get one, but it appears we are getting a new GL. I hope so and maybe it is Carol Ferris, which would be a nice twist.
Gwen: I want Kyle back as the lead Earth GL - but I know that's not going to happen. Ah well. I'm surprised they're even hinting at a new lead with the movie being so recent. I mean if the movie has pulled in any new fans they'll probably want to read about Hal - that's what the marketing people usually seem to assume anyway.
Lee: And the cover of the first issues has a bloody fist on it... Nothing appeals to the masses more than a good helping of blood.
Matthew: Jim, it says "unexpected new Lantern". If you think it's Carol, then it's now sure NOT to be her.
Thomm: If that's a woman's hand she needs to be tested for steroids. 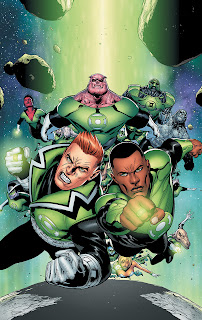 GREEN LANTERN CORPS #1
Written by PETER J. TOMASI
Art by FERNANDO PASARIN and SCOTT HANNA
Cover by DOUG MAHNKE and CHRISTIAN ALAMY
On sale SEPTEMBER 21 • 32 pg, FC, $2.99 US • RATED T
When deadly conflicts emerge across the universe, it’s up to Guy Gardner, John Stewart and an elite Green Lantern strike force to keep the peace – or else.

Jim: I just hope this book is its own thing. I believe Guy and John could be a very cool team and running around taking down big threats could be a lot of fun. Tomasi is one of DC’s best writers and Pasarin is a strong artist and Hanna is a top flight inker. This book could be a winner.
Gwen: Or maybe it is Kyle as the new lead seeing how he's not on this cover - oooOOOooo.
Lee: I think this is going to be DC's version of Cable & Deadpool... which was very entertaining.
Thomm: No interest in Deadpool. No interest in this. 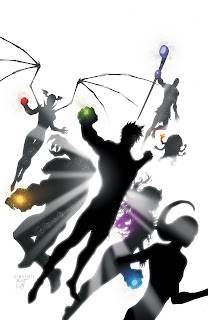 GREEN LANTERN: NEW GUARDIANS #1
Written by TONY BEDARD
Art and cover by TYLER KIRKHAM and BATT
On sale SEPTEMBER 28 • 32 pg, FC, $2.99 US • RATED T
Kyle Rayner has assembled the most powerful team in all the universe, selected from the full spectrum of corps. But can he even keep this volatile group together?

Jim: Poor Kyle, DC can’t figure out what to do with him. At one time he was the last green Lantern, now he is a Guardian along with other Rainbow corps members. Not sure how a book about the bosses of the show will hold our interest.
Gwen: And there's my downer *sigh* Well at least they're trying to give him somewhat of his own spotlight. This could be interesting - it really depends on how they build character interactions seeing how volatile some of the other Lanterns can be.
Matthew: Wasn't there a less than stellar book called New Guardians back in the mid-80's? Are the (really) old blue Guardians still around? Actually, this seems like a natural progression of the multicolored ring storyline. Maybe this will be the new Guardians of the Galaxy.
Thomm: This has more potential than the other GL related books for me. Could be an intergalactic JLI. 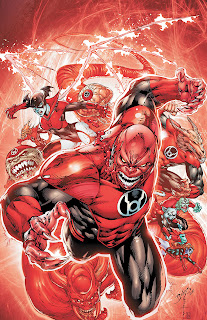 RED LANTERNS #1
Written by PETER MILLIGAN
Art and cover by ED BENES and ROB HUNTER
On sale SEPTEMBER 14 • 32 pg, FC, $2.99 US • RATED T+
Atrocitus and his Red Lantern Corps return in their own series, battling against injustice in the most bloody ways imaginable!

Jim: No way this book works. Still if anyone can’t make blood vomiting lanterns a hit series it will be Peter Milligan. Ed Benes has not produced a lot of work lately and I wonder what his work will look like now. Actually I’m rather intrigued by this series.
Gwen: All I want to know - will rage-kitty be a central character here? Because if not I don't think this book will interest me for long.
Lee: HEY! Wait a minute! Wasn't the chick with the bone wings and faux bat helmet on the cover of the last book too? Why, indeed she was. It's sad when you have to recycle red lantern characters because you have so many books coming out. I'm just waiting for her to join the JLA now. Just to see her vomit blood on Superman's boots would be worth the cover price.
Matthew: Sorry for all the questions, but are we supposed to be rooting for these people? I suppose their threats are worse then they are, but maybe I'm just being judgmental.
Thomm: Now, I'm a huge fan of the Secret Six, but that group doesn't make any pretense of trying to be these guys. I thought the Red Lanterns were supposed to be so mad about their unjust fate that they largely killed anyone they held remotely responsible. That doesn't make for very interesting stories, never mind the moral implications.