Harry Potter - the end (of the movies) 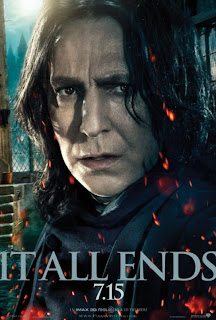 Harry Potter and the Deathly Hollows Part 2: A Review


So finally, the long awaited (for crazy fans like me anyway) ending to the Harry Potter series makes its way to the big screen. I went and saw it Sunday night.


Here's the thing, overall I enjoyed it. They hit the major points and did a good job fitting a whole lot of story into the span of two hours (and yes, I suppose they technically had four-ish hours since it was split into two movies, but it's still a lot of story). The major issue I had with it was the problems that arose from the previous movies leaving out major plot points. Quite honestly this may have gone mostly unnoticed by anyone who hasn't read the books - my husband never read them and the movies have worked okay for him. I say okay because there are a few things I've had to explain, but not too much. Even so, I felt that they had to create new plot points on the spot in this movie in order to explain certain things. The major one - the Horcruxes.


Sure, we've established that the Horcruxes are bits of Voldemort's soul that Harry has to find and destroy in order to be able to kill Voldemort. But in the sixth book (Half-Blood Prince) Harry spends much of his time with Dumbledore exploring Voldemort's past in order to understand what he may have used as Horcruxes - and where he may have hidden them. That's how Harry figures out that Voldemort used items of importance - and hid them in places of importance to him. I mean, did any of your movie-exclusive followers of Harry Potter wonder why Voldemort made a goblet into a Horcrux? In case you're wondering it was the goblet of Helga Hufflepuff. Voldemort used a locket as a Horcrux that belonged to Slytherin, and a diadem that once belonged to Ravenclaw. This is a theme that was really skipped over in the movies - instead they decided that Harry could "hear" the Horcruxes when he was close to them - thus trying to cover the information gap left by previous movies.


I understand that stuff has to be left out when a book gets translated to film. I just think that leaving out the Horcrux information from Half-Blood Prince was a bad call (especially when they added random scenes that hadn't been in the book for no apparent reason).


The battle scenes were awesome though. I loved seeing the professors defend the school. Also the dragon from Gringotts was so much fun - they really managed to make you feel bad for that poor dragon too. The final fight between Voldemort and Harry was decent although the big reveal about the Elder Wand could have been done better. Hah, the Elder Wand... for those of you who read the book - what was that about? How hard would it have been for Harry to just ment his old wand and say he was going to put it back in Dumbledore's tomb? After all the build up about the wand I find it hard to believe that it could be dealt with by snapping it in half. Ah well.


Like I said, overall I've enjoyed the Harry Potter movies. They have worked really hard to translate a seven book series into film and we've certainty got to see the kids grow up over the years - the same way you do in the novels. Snape character development has also been excellent and it's sad to realize I have no more of these movies to look forward to. Even so, I encourage anyone who's liked the movies but has yet to read the books to pick them up - the movies are only a taste of an amazing story written by a very talented writer.
Posted by Gwen at Tuesday, July 19, 2011