Lee: There’s a little bit of everything this month from IDW. New series, the standard horror fare, and even some great strip reprints. Gonna be an expensive month for me.
Thomm: Oh, here’s the horror stuff. Where’s the T&A Suicide Girls stuff?

Star Trek Ongoing #1
Mike Johnson (w) • Stephen Molnar (a) • Tim Bradstreet, David Messina (c)
The adventures of the Starship Enterprise continue in this new ongoing series that picks up where the blockbuster 2009 film left off! Featuring the new cast of the film, these missions re-imagine the stories from the original series in the alternate timeline created by the film, along with new threats and characters never seen before! With creative collaboration from STAR TREK writer/producer Roberto Orci, this new series begins the countdown to the much-anticipated movie sequel premiering in 2012. Join Kirk, Spock and the crew as they boldly go into a new future! Up first, a drastic new envisioning of “Where No Man Has Gone Before.”
• 2 regular covers will be shipped in a 4-to-1 ratio (4 Tim Bradstreet, 1 David Messina) FC • 32 pages • $3.99
Four different free variant photo covers! The four covers will be distributed evenly, making each one a unique 1-in-40 variant!.
Each issue features a unique “Golden Ticket,” a lottery with amazing prizes! Details coming soon!
Lee: I thought there already was a Star Trek ongoing. Maybe IDW just flooded the stands with Trek mini’s and it confused me. But, starting the series a year before the new movie is a good idea. And, for whatever reason, my interest is piqued.
Thomm: I’ve never taken the time to see whether this whole thing sits well with the diehard fans. Abrams totally revamped the original Rodenberry vision of the show which is kind of like editing the Bible to make John the Baptist the central figure of the New Testament.
Lee: Before I forget, did anyone notice the "golden ticket" thing. Since when did comics become Charlie and the Chocolate Factory?

Ghostbusters #1
Erik Burnham (w) • Dan Schoening (a) • Schoening, Nick Runge (c)
Are you troubled by strange noises in the middle of the night? Do you experience feelings of dread in your basement or attic? Have you or any of your family ever seen a spook, specter or ghost? If the answer is yes, call the professionals! Psychokinetic energy is on the rise again, business is booming for the boys, and Ray is troubled by what could be a prophetic dream… Is this an ill omen of an upcoming apocalypse, or just a little indigestion? These questions and more are raised in the first issue of the all-new, ongoing GHOSTBUSTERS! FC • 32 pages • $3.99
Lee: Now this is interesting. A Ghostbusters ongoing series is not what I expected. I think there have been 3 or 4 mini’s before this, so there must be a pretty good fan base but I never hear any buzz about it. There’s a certain amount of nostalgic appeal to the title but $4 for a book is hard to do.
Thomm: It’s really hard to capture the magic of Akroyd, Murray, et al on the printed page. The couple of old Ghostbusters efforts I’ve read haven’t come close.

The Monstrous Collection of Steve Niles and Bernie Wrightson
Steve Niles (w) • Bernie Wrightson (a & c)
From the creator of 30 Days of Night comes a colletion so terrifying, so huge, so gritty and raw that it had to be called MONSTROUS. Collecting the collaborations between two living horror legends—Steve Niles and Bernie Wrightson—this tome includes three complete tales: Dead She Said; The Ghoul, and Doc Macabre, each a piece of the dark, dangerous universe Niles has created in the shadows of the world we think we know. Enjoy them here, collected together and in oversize black and white form for the first time. HC • BW • $50.00 • 176 Pages • 9” x 13.5” •
Lee: Hummm, this is tempting. An oversized hc of Wrightson’s work is very, very tempting indeed. But, if I remember the stories collected are only ok. I like Wrightson but I am not sure I like him enough without some solid stories for this collection.
Thomm: I’ve only read Dead She Said of this bunch. Jim liked it a lot more than I did. 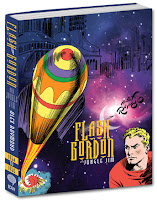 The Definitive Flash Gordon and Jungle Jim, Vol. 1
Alex Raymond (w & a & c)
IDW’s Library of American Comics is producing The Definitive Flash Gordon & Jungle Jim as part of the Ultimate Alex Raymond Collection. The Definitive Flash Gordon & Jungle Jim will present every Sunday by Raymond from both classic strips together for the first time, in the oversized 12” x 16” champagne edition format. The artist’s post-war modernist detective series, Rip Kirby, is currently being collected.
Eisner Award-winner Dean Mullaney is editing and designing the deluxe editions. “Although Flash Gordon has been previously reprinted, this—finally—is the first meticulously remastered and restored edition that prints the strip in a large size and in Raymond’s original format that includes the Jungle Jim topper. We believe this will be the definitive edition for the ages.”
Jungle Jim was created as a strip topper for Flash Gordon, and followed the life of Jim Bradley, who fought pirates, slave traders, and assorted villains in the exotic Southeast Asia of the 1930s. This neglected Raymond classic also features Jim’s native cohort Kolu and femme fatale Lille DeVrille. HC • PC • $75.00 • 176 Pages • 12” x 16”
Lee: Since I have a bunch of Raymond Flash Gordon already I was thinking of passing until I saw the size of the book. This book is enormous! It’s not quite full size, but it’s gotta be darn close. This will be as close to the originals as you can get. *sigh* Another big expenditure coming.
Thomm: This is something I’d like. Old adventure strips are fun and a great look back at the times in which they were created. These are among the tops in quality, too.

The Keep
F. Paul Wilson (w) • Matthew Dow Smith (a & c)
The keep had stood empty in the Transylvanian Alps for 500 years. No one knew who built it, or why. But on the eve of WWII, German soldiers move in and awaken something — something hungry — something as merciless as the SS einsatzkommandos accompanying them. Now you can re-live the tale as it was meant to be told (we didn’t mention the 1980s movie directly, but…) as author F. Paul Wilson adapts his own story in this 2011 edition with new cover by Matthew Dow Smith! HC • FC • $24.99 • 124 Pages
Lee: I read The Keep years ago when I had plenty of time to read any, and everything. I seem to remember it being pretty good as horror stories go. Smith has a nice clean style, not unlike Phil Hesters. This looks to be pretty good.
Thomm: I think I read this, too, but I don’t recall a thing about it. By this time I may be mixing it up with 1946 from the Mignola-verse.

Done To Death
Andrew Foley (w) • Fiona Staples (a & c)
Fed up with receiving poorly written Twilight knockoffs, editor Shannon Wade did what any reasonable person would: she started killing the worst of the would-be authors sending them to her. Meanwhile, Andy, a stuttering, overweight vampire has targeted those who portray vampires in a light he deems unrealistic. Not exactly novel but terribly graphic, Done To Death follows Andy and Shannon’s paths towards a collision as darkly funny as it is ridiculously violent. TPB • FC • $19.99 • 144 Pages All-new, standalone graphic novel! Visit Fiona Staples here.
Lee: It’s interesting that this is considered “all new” when it was published as a six issue mini series back in 06 by Markosia. I have the first issue stashed in a long box somewhere. I seem to remember it being ok, but the art was… maybe abstract is a good word. Proceed with caution on this one.
Thomm: If Lee’s wary of the art, that’s a klaxon.

Grimm’s Fairytales, Vol. 2
Jacob and Wilheim Grimm (w) • Kevin Colden (a & c)
Often thought of as children's tales, the original stories from the Brothers Grimm are nothing of the sort. Dark, vindictive and full of hard-to-swallow life lessons, this second collection of Grimm's Fairy Tales re-presents these lasting prose stories with contemporary illustrations by Eisner Award-nominated artist Kevin Colden. HC • FC • $16.99 • 200 Pages • 6” x 9” Visit Kevin Colden here.
Lee: Another book, not just comics, selection this month. I don’t think I’ve ever read the original Grimm’s tales. I’ve read Wizard of Oz and all sorts of other old timey books, but not Grimm’s. I keep hearing the original versions are quite dark so maybe it’s time to take a look.
Thomm: This should be good. Not the pinup stuff of similar name, either.
Lee: Overall a good month, and even though it’s really expensive, the Raymond Flash Gordon is just awesome. I can’t wait to get it.
Thomm: Flash Gordon’s probably the most exciting thing here. Some good stuff at Image I’m looking forward to as well.
Posted by Lee at Thursday, July 14, 2011