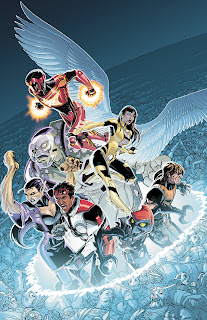 LEGION OF SUPER-HEROES #1
Written by PAUL LEVITZ
Art by FRANCIS PORTELA
Cover by KARL KERSCHL
On sale SEPTEMBER 21 • 32 pg, FC, $2.99 US • RATED T
The Legion of Super-Heroes has been decimated by the worst disaster in its history. Now, the students of the Legion Academy must rise to the challenge of helping the team rebuild – but a threat of almost unstoppable power is rising at the edge of Dominator space, and if the new recruits fail, the Legion Espionage Squad may be the first casualties in a war that could split worlds in half!

Jim: With all the changes I guess I’m happy to still see a Legion book, but Levitz is missing the magic he had on this book from years ago. I think I buying and reading this on hope because I love the characters so much.
Gwen: Ah, with the Legion it seems like that's all we have most of the time - hope. I don't have high hopes for this but I will try... and keep trying everytime a new Legion series comes out.
Matthew: I hope Jim and Gwen finally get the Legion series they've been wanting!
Thomm: I've checked out the Legion at different times but never had the affection Jim and Gwen do. From what I've seen of their opinion of Levitz's most recent run, I don't see why I should take a flyer on this. 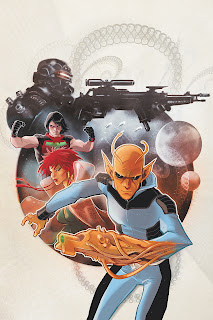 LEGION LOST #1
Written by FABIAN NICIEZA
Art and cover by PETE WOODS
On sale SEPTEMBER 14 • 32 pg, FC, $2.99 US • RATED T
Seven heroes from the 31st century have traveled back to the present day. Their mission: Save their future from annihilation. But when the future tech they brought with them fails, they find themselves trapped in a nightmarish world that, for them, is the ultimate struggle to survive!
Don’t miss the start of this all-new LEGION series illustrated by Pete Woods – fresh off his spectacular run on ACTION COMICS – who is joined by writer Fabian Nicieza (RED ROBIN)!

Fabian on being Lost with the Legion.

Jim: Odd book. Legion Lost being redone as a time travel thing putting some Legion people in the past. I have zero expectations about this book and will just have to see what it is when it hits the stands.
Gwen: I'm looking forward to it - looks like it could be interesting and the creative team looks solid for the endeavor. I have higher hopes for this than more Levitz Legion at this point in time.
Matthew: Actually, this could be good. Woods is a great artist and Nicieza is a good team book writer (like the post-Busiek Thunderbolts). If they fail to save the universe, that'll give TPTB an excuse to reboot everything again (when they need all the artists to catch up on their work load).
Lee: It seems odd but after 11 days of this, it really appears that DC is just trying to make sure there are at least 2 books on the stands for every title. Legion has always barely managed to support one book and now DC is saturating the shelves with 2 LSH books. It seems to be gutting your own audience. That said, this sounds better than Levitz's book.
Thomm: Two books is saturation? That's a shallow cup. 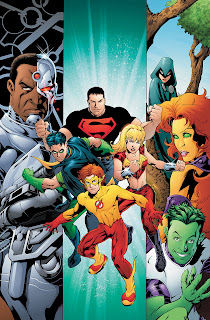 TEEN TITANS BY GEOFF JOHNS OMNIBUS VOL. 1 HC
Written by GEOFF JOHNS, BEN RAAB, JAY FAEBER, JUDD WINICK and JEREMY JOHNS
Art by MIKE MCKONE, TOM GRUMMETT, GEORGES JEANTY, DEREC AUCOIN, DREW JOHNSON, IVAN REIS and others
Cover by MIKE MCKONE
Witness the formation of a new team of Teen Titans and their initial battle against an old, familiar foe, Deathstroke, in this hardcover collecting the first fifteen issues of the series from writer Geoff Johns! The reasons behind Deathstroke’s actions prove shocking to the team, and before the teen heroes can get their feet on the ground, they must battle the cult of Brother Blood.
Then, Raven returns with a new body and a new master: the latest Brother Blood! Plus, Deathstroke’s daughter, Rose Wilson, assumes the identity of the Ravager and switches from Titans ally to Titans threat.
Now Deathstroke and Rose hunt for the Titans. Could things get any more explosive? They do, when Kid Flash learns to drive!
This mammoth collection also features TEEN TITANS #1/2, TITANS SECRET FILES #2, TEEN TITANS/OUTSIDERS SECRET FILES 2003, LEGENDS OF THE DC UNIVERSE 80-PAGE GIANT #2 and the four-issue BEAST BOY miniseries!
On sale NOVEMBER 30 • 560 pg, 7.25” x 10.75”, FC, $75.00 US
Jim: This smacks of DC just collected everything by Johns. Why not his first JSA run, maybe because the first 51 issues were by him and David Goyer and the book was some of the best work ever done with John’s name on it. Johns is a talent, that I have soured on, but DC reprinting all his stuff in hard cover doesn’t make his work any better.
Gwen: Johns is still really popular with a lot of fans so you can't really blame DC for putting his work together like this - we may be in it for good comics but DC is still a marketing machine trying to ring out money from their fan base. Publishing something like this is a good money making move because with the popularity Johns generated with Blackest Night stuff like this can be sold in places like Hot Topic and generate money outside of their normal retailers.
Matthew: I read a few of these issues in an early trade and they were decent. I liked that Bart remembered everything he read, but I didn't like that his leg got smashed or something (can't recall exactly). I do remember this being fairly popular at the time and one of the few successful versions of the TT after Wolfman/Perez. Plus, wasn't it a follow-up to Young Justice? This is certainly worthy of a HC treatment of recent material.
Lee: This is good but I would rather see a Young Justice hc instead. That series was awesome.
Thomm: Ah, the never ending debate about what's worthy of reprints in whatever format. I read this stuff in trades and that was good enough for me. As long as I get a chance to read something interesting at a decent price, that's pretty much the end of the discussion for me, when it comes to formats. 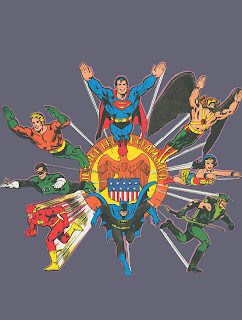 JUSTICE LEAGUE OF AMERICA ARCHIVES VOL. 10 HC
Written by DENNIS O’NEIL, MIKE FRIEDRICH and ROBERT KANIGHER
Art by DICK DILLIN and JOE GIELLA
Cover by NEAL ADAMS
In this collection of issues #81-93, the JLA and their Earth-2 counterparts, the Justice Society, must save the Red Tornado. Plus: Solomon Grundy and the timely threats of world hunger and pollution.
ADVANCE SOLICITED • On sale FEBRUARY 29 • 272 pg, FC,
$59.99 US
Jim: I thought the Archives program was dead and yet volumes keep tricking out like a leaky faucet. This area had some weak stuff and some okay stuff, I’m getting it, but it is uneven at best.
Gwen: Well obviously they'll keep putting it out if people keep buying it :P
Matthew: I've got the first four JLA archives and only get them at 50% off or more, but I've yet to read a single one of them. The cover on the other hand is very familiar to me. I had an over-sized treasury with this cover on the front with the JSA in similar formation on the back. It's a very iconic and nostalgic image for me.
Lee: Saying this uneven is stating the obvious. All stories from the early 70's are... shall we be kind and say different. But, this cover here really does sum up what you are getting in this archive.
Thomm: Super Friends? That's what the cover evokes for me. I see Matthew needs as much help as Jim, buying stuff he never reads. 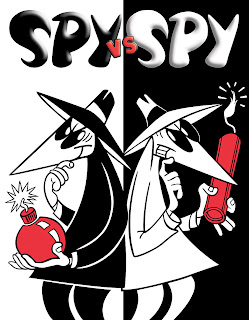 SPY VS. SPY BY PROHIAS OMNIBUS HC
Written by ANTONIO PROHIAS
Art and cover by ANTONIO PROHIAS
Since the 1960s, “Spy vs. Spy” has been one of the most popular features in MAD Magazine. The diabolical duo of double-crosses and deceit (one dressed in black, the other in white) have continued to
one-up each other – till death do them part.
Now, their complete, original exploits are collected in hardcover. Don’t miss a moment of the action!
On sale NOVEMBER 9 • 400 pg, FC, 7.025” x 10.825”, $49.99 US
Jim: Another out of the blue book. As a one page strip in Mad Magazine, once a month this was okay, as an Omnibus collection, not so much.
Gwen: This is actually something fun to put out on the shelves but it's a bit pricey for the material.
Matthew: After getting the Don Martin collection last year at Comic-Con, I think this is a FANTASTIC idea. I've always loved Spy Vs. Spy and if I can get it at a decent discount, it'll be a great read one day.
Lee: I have this in oversized tpb so I will skip this collection, but it is fantastic. Great, great stuff that will entertain you for hours.
Thomm: This would be something my 10 year old son would enjoy. He's become a Mad devotee since the TV show on Nickelodeon.


Jim: Wow – never doing that type of review again. Way too much work needed to pull it off and with my work schedule it was not an easy thing. Hope people enjoyed it, as it was a lot of work, but still fun.
Gwen: I'm glad we'll be avoiding this type of review in the future. I just had to comment ant it was still a lot! I can't say I'm terribly excited by the whole DCNu thing but I'm willing to give it a try and see where it goes. At least DC is trying to change up some of their books and while I may not like the changes it's not a bad thing to give it a shot because stagnation is even worse. Matthew: It was a blast! I can see why y'all get into this month in and month out. But, Jim you're really not being fair to Marvel. After going through all these solicitations, there really is very little REAL change in the DC Universe (besides Superman and a few new titles). It's mostly renumbering. In the latest Previews, Marvel was poking fun at it by having each title carry the old "Still Only 35 Cents" label, only instead it said "Still #17" or whatever number the title happened to be on. I wouldn't be surprised if they actually put those on the covers that month to contrast the DCnu. Good thing we don't operate under the "Fairness Doctrine" or we'd HAVE to give them equal time (based on my limited understanding of the concept).
Lee: I can't believe you really did it . 11 days... it's incredible.
Thomm: The Fairness Doctrine only applies to political promotions and only to media using the airwaves. Anyway, gotta agree with Matthew that most of this is not changing anything about the DCU. Mostly I'm disappointed that there's no more Secret Six by Simone.