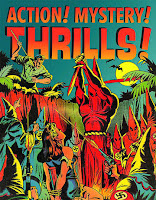 Fantagraphics Books
Action Mystery Thrills Covers SC by (E) Greg Sadowski
A long-overdue celebration of the classic comic book covers that jostled for attention monthly on mid-20th century newsstands. Majestic, iconic, chaotic and sometimes downright weird, Action! Mystery! Thrills! unfurls 160 classic covers in full-sized glory. Featuring scores of cover artists including Carl Barks, Charles Biro, Dick Briefer, L.B. Cole, Jack Cole, Reed Crandall, Will Eisner, Bill Everett, Lou Fine, Walt Kelly, Jack Kirby, Mac Raboy, and Alex Schomburg. A must for anyone with even the passing interest in the Golden Age! 240 pgs, $29.99
Lee: Another coffee table book that I won’t be able to pass on! This should have some of the best GA covers in a nice easy to see format. These are just great and this should be a ton of fun.
Gwen: While I agree that these would be fun to look at I wouldn't spend money on a book with just covers. But Lee's the art guy. 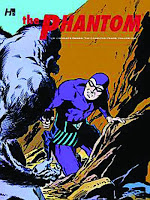 Hermes Press
Phantom Complete Series Charlton Years Vol. 01 HC by (W) Dick Wood (W/A) Jim Aparo, Pat Boyette, Various
The late 1960s comic book adventures of The Phantom return in full, glorious color! Volume One of The Charlton Years picks up with The Phantom #30, the first Charlton issue, and features all The Phantom stories from issues #30-#40. The Charlton comic book version of the grand-daddy of costumed heroes, the Ghost Who Walks, is available again, digitally remastered to look better than the original books. Don't miss it! $49.99
Lee: Normally I would pass on a book like this but this is some of Jim Aparo’s earliest work. And it is just fantastic. He was given a level of artistic freedom that he wouldn’t have over at DC and it shows. This is worth it just for the art alone.
Gwen: I never actually read any of the Phantom stories and my only familiarity with the character is that really awful move a few years back. This looks like a good collection for letting thouse of us who are unfamiliar with the Phantom find out more about the character.

Hmanoids Inc
Metabarons Ultimate Collection Slipcase by (W) Alexandro Jodorwsky (A) Juan Gimenez
The first cycle of the epic saga created by Alexandro Jodorowsky and Juan Gimenez compiled for the first time in its entirety in the same oversized deluxe edition, with slipcase, as the Eisner nominated edition of The Incal Classic Collection. A multi-generational tale of family, sacrifice, and survival told within an immense universe, both in scope and originality. A true classic in the pantheon of graphic storytelling and science fiction as a whole. $129.95
Lee: Ok, I already have this in tpb. It’s really expensive. IT’S REALLY GOOD! This is just a fantastic series that will blow your mind. It’s soooo worth the money if you can afford it. Yes, Gwen, I shall give my trades to your Dad and than you can have them…
Gwen: That's good... because this is REALLY expensive. And I can't afford it. The same way I couldn't afford Amy Reeder's cover art with Supergirl and Brainiac 5 *cries* 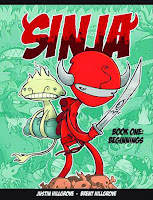 Imps & Monsters
Sinja Book 01 GN by (W) Justin Hillgrove (A) Brent Hillgrove
All Sinja ever wanted was to become a Sinjitsu Master - the most powerful and terrifyingly evil assassins in the land. But when he discovers that his Sensei is dead, his hopes and dreams are cast into the wind. With the help of a powerful Oni spirit, a celestrial monkey, and a lot of good intentions, he must find a way to gain entrance to the Underworld, hunt down his Sensei's spirit, and force him to reveal the secrets of Sinjitsu. Only then will he necome a true Sinjitsu Master. 72 pgs, $19.95 Visit the official site here.
Lee: And this is the random book of the month. The title looks like it belongs over at SLG with all the other goth titles. Oh well, there’s a certain appeal to this that I can’t quite explain. Maybe it’s the tongue in check way the solicit is written, maybe it’s the strangely cute artwork. Whatever it is, it looks like fun.
Gwen: Actually, this looks rather awesome. Oddly enough the art looks a whole lot like a friend of mine's artwork. I guess I should pass this along to her - maybe Cathy could do comic art.

NBM
Star Gazing Dog GN by (W/A) Takashi Murakami
A moving manga that is a major best-seller in Japan. Oto-san is down and out. Life has conspired against him, nothing coming together the way he wished, so he sets out with his car to just get away from it all. All people around him have abandoned him in indifference but as we discover along with him, the one he can count on utterly and completely is a dog he just adopted who follows him blindly, faithfully and completely, to the end, lightening up his new adventure into the unknown. 128 pgs, $11.99
Lee : With all the negative news in the world, sometimes you just need a book that will make you feel good. This looks like that book.
Gwen: If nothing else it has a good title. And that dog is hypnotically adorable.

Rebellion / 2000AD
Flesh Dino Files GN by (W) Pat Mills, Geofrey Miller (A) O'Neill, Dayglo, Sola, Various
Think that a meteorite collision with our planet was responsible for making the dinosaurs become extinct? Wrong! By the 23rd Century, man has drained the planet's resources bare, but thanks to time-travel technology, the Trans-Time Corporation send rangers - such as cowboy Earl Reagan - back to the days when dinosaurs ruled the Earth. The rangers round up these magnificent creatures and blast them back into the future so we can get real flesh back on the menu! $25.99
Lee: Yeah, this is probably a british version of Jurassic Park but, honestly, who cares. It’s got great artists and some good writers so there a really good chance there will be lots of pretty pictures of dinosaurs eating people. What’s not to like about that?
Gwen: Wow, we caused the extinction of dinosaurs by eating them. Fun concept but how did they manage to pitch it. "I have this awesome idea - what if, in the future, there was no meat? So then we have to time travel - to eat dinosaurs!" Well, I'd rather dino be on the menu than soilant green.

Titan Publishing
Simon & Kirby Library Crime HC by (W) Joe Simon (A) Jack Kirby
The creators of Captain America and the Boy Commandos produced some of the hardest-hitting crime comics of the 1950s. Often featuring real-world killers and thugs like Ma Barker, Al Capone, and Pretty Boy Floyd, and true-to-life events like the St. Valentine's Day Massacre, these adventures were torn from post-Prohibition headlines. These are the best of the Simon and Kirby Crime comics, authorized by Joe Simon and the estate of Jack Kirby and fully restored and collected for the first time! $49.95
Lee: Yes, these are old comics but this is one of the best packages of Kirby art on the market. I bought the other S&K Superheroes collection and it was excellent. Oversized, and lots of pages. If you love Kirby and old comics this is a must.
Gwen: Ah, more Kirby. While I can appreciate the comic giants of the past, and respect them,I don't need their work on my shelf. This is a cool book for those fans who do like Kirby collections though.
Lee: A solid month and more than enough previews. Personally I am thrilled for the covers reprints and the Kirby crime.
Gwen: I'm excited to finally know the reason why dinosaurs became extinct!
Posted by Lee at Wednesday, July 27, 2011