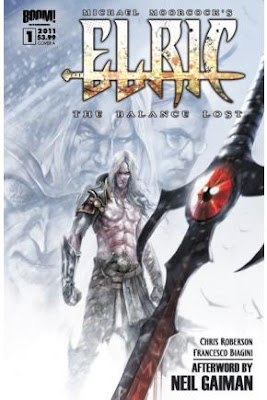 While I wasn’t overly impressed with the FCBD preview, I did recognize that this series seemed to have great potential. Issue #1 came out this week and it DELIVERED, exceeding my expectations. Now, I’ve been an Eternal Champion fan since middle school (30 [yikes] years ago!) and have most of the original novels, including a complete collection of the Berkley Fantasy paperbacks from the mid-80’s, featuring the stunning covers of Robert Gould. (All in mint condition I might add, except for my copy of Stormbringer, which is still swollen from getting caught in a downpour one summer at our Fishnet campsite.)

So, although I’m a fan already, I would think this book would be readily accessible to newcomers. This is quite an achievement, because the story focuses on four (so far) aspects of the Eternal Champion: Elric, Hawkmoon, Corum (my favorite), and Eric Beck (a new character). Some incarnations serve Law; some serve Chaos, but all ultimately serve the cosmic balance. It would be erroneous to categorize the two sides as Good and Evil; those distinctions are blurred depending on the circumstances. Personally, that doesn’t jive with my Biblical worldview, but this is a fantasy story, not reality.

Trouble is brewing in the Multiverse with various omens foretelling that the Balance is in jeopardy of being lost. The story opens with Elric traveling to one the myriad universes, which is about to be totally overrun by Chaos. There’s a gruesome two-page image of misshapen horrific creatures (think Zombies on acid). Then the scene shifts to Eric Beck, an albino game designer in the “regular” world (or close to it), who’s been having recurring dreams about Elric. They’re so realistic that he’s having trouble distinguishing who he really is.

Eric is the thread that connects the other characters together, providing nice segues to their parts of the story. He sees a suit of armor and the next panel is Hawkmoon in a similar pose. He sees a black ship and we transition to Corum sailing back from Tanelorn. Despite his doubts about his sanity, Eric is also in conflict with his twin brother, Garrison Bow, who leads the Law Party, which has it’s own militia with their “straight arrow” insignia. These guys may be for Law and Order, but in this world they appear to be intolerant, narrow-minded, Tea Party-ers (no comment).

Meanwhile, Elric, who normally has the ability to go between realities by walking along the moonbeam roads, finds himself trapped in that mixed-up dimension with the multi-mouthed monstrosities. He starts to hack and slash in earnest with Stormbringer – too bad there isn’t much soul stuff for him to absorb. Our final scene shifts back to Eric who is about to be whacked by the Law Party stormtroopers for daring to call them “stupid”, when the champion’s companion shows up to stop the melee. It’s a young lady toting a sawed-off shotgun who looks like she just stepped out of the Thunderdome. “Eric Beck, you need to come with me NOW. The fate of ALL the WORLDS is at stake!” And we’re off to a rollicking start…kinda reminded me of a Doctor Who episode. I loved it.

I really enjoy the art now. Elric, Corum, and Hawkmoon are all very distinct. By comparison, Beck seems to be a little lacking on features, but that’s probably by design too, since he’s an “everyman”. Francesco doesn’t skimp on the backgrounds and perspective either and he tackles the diverse locales effectively. He uses a lot of different panel layouts, making the story very easy to follow. I like his take on Stormbringer too. Downer’s colors really shine through. He gives the sky more depth on Elric’s world by adding a few stray swirls to the sickeningly green atmosphere. The runes on Elric’s sword have a subtle blue glow when it takes a creature’s soul – that’s probably not new, but I thought it looked cool. The whole package (art, colors, lettering) works great together.

Best of all, I’m not only looking forward to the next issue, I’m anxious to start reading my old paperbacks again. Any series that can resurrect a long dormant affection is on the right track!

Grade A: An entertaining, enjoyable, and accessible read that superbly handles Michael Moorcock’s rich Eternal Champion series. BOOM’s two for two with licensed properties. Both Planet of the Apes and Elric are in good hands.
Posted by Matthew at Saturday, July 09, 2011