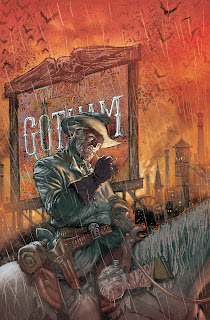 ALL-STAR WESTERN #1
Written by JUSTIN GRAY and JIMMY PALMIOTTI
Art and cover by MORITAT
On sale SEPTEMBER 28 • 40 pg, FC, $3.99 US • RATED T+
Even when Gotham City was just a one-horse town, crime was rampant – and things only get worse when bounty hunter Jonah Hex comes to town. Can Amadeus Arkham, a pioneer in criminal psychology, enlist Hex’s special brand of justice to help the Gotham Police Department track down a vicious serial killer? Find out in this new series from HEX writers Justin Gray and Jimmy Palmiotti, with lush artwork by Moritat (THE SPIRIT)!
All-Star Western Talk here and here.
Jim: So one part of me is happy to see Jonah Hex made the cut and we have a western, another part of me is sad to see that they have moved it to Gotham City, it is now All Star Eastern I guess. The art will be great and I like the idea of a backup feature for this book, we could get Scalphunter, Bat Lash and others.
Gwen: It's not really a Western if it's not in the West... maybe that's just me. I glad for fans like Jim that Jonah Hex made the cut.
Thomm: Mr Change the Face Under the Mask is looking forward to back up stories with all the characters he knew as a kid. The split personality disorder is in full flower. Anyway, this should be a good book with this writing team.
Matthew: There may only be one horse (Hex's), but there looks like plenty of industrial pollution in Gotham. It would be interesting to show the history of GC this way as long as it makes sense geographically.
Lee: I'm more interested in Moritat's art than anything else. It is good to see Jonah Hex has survived the big purge though. 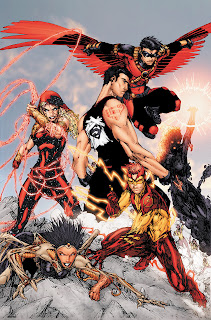 TEEN TITANS #1
Written by SCOTT LOBDELL
Art and cover by BRETT BOOTH and NORM RAPMUND
On sale SEPTEMBER 28 • 32 pg, FC, $2.99 US • RATED T
Tim Drake, Batman’s former sidekick, is back in action when an international organization seeks to capture, kill or co-opt super-powered teenagers.
As Red Robin, he’s going to have to team up with the mysterious and belligerent powerhouse thief known as Wonder Girl and the hyperactive speedster calling himself Kid Flash to stand any chance at all against a living, breathing weapon with roots in another world! They – along with a few other tortured teen heroes – will be the Teen Titans in this new series from writer Scott Lobdell (WILDC.A.T.S, Uncanny X-Men) and artist Brett Booth (JUSTICE LEAGUE OF AMERICA)!

Lobdell talks about The TT
Jim: I’m sorry DC has failed with the Teen Titans, over and over and over again and while I hate to be a negative Nancy here, Lobdell and Booth, not exciting me. Where the Teen Titans failed was worrying about remaining teens. Under Wolfman and Perez the kids grew up over time and they added younger kids, this becomes like the high school of super heroes and never seems to work anymore. Maybe if it was a musical? Plus this seems to be one of those books that has some heavy changes to old continuity.
Gwen: Wow, so we've scraped Conner and rebooted Supergirl - and seem to have done something similar to Wonder Girl and Kid Flash. So basically we've decided to rewrite all the younger characters. That really annoys me as I liked a lot of these characters and think it's a shame to have so radically altered them.
Thomm: The premise is interesting with the proposed changes but I don't know that this is the creative team to do it.
Matthew: I think they just keep putting out more Teen Titans series just to maintain the copyright. It's ironic that the two biggest books of the early 80's: New Teen Titans and Uncanny X-Men are both "dead" to me right now and have been for nearly 20 years! It's so bad that I'm even having a hard time getting excited about the long, long, long awaited release of the Games HC.
Lee: I think what Greg said about Supergirl applies here. Maybe this would work if it were the first or second TT reboot but it isn't. This is the fourth of fifth re-start, new direction, or whatever you want to call it in the past 5-10 yrs. I'm not getting burned again so I will wait for reviews. 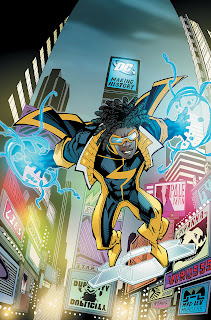 STATIC SHOCK #1
Written by SCOTT McDANIEL and JOHN ROZUM
Art and cover by SCOTT McDANIEL and JONATHAN GLAPION
On sale SEPTEMBER 7 • 32 pg, FC, $2.99 US • RATED T
The brilliant, slightly awkward high school student Virgil Hawkins transforms into the cocky electromagnetic hero Static!
A mysterious tragedy forces the Hawkins family to relocate from Dakota to New York City! Virgil embarks upon new adventures in a new high school and a new internship at S.T.A.R. Labs!
As Static, he dons a new uniform and establishes a new secret headquarters! But is he ready to take on the new villains who lurk in New York City’s underworld?

Jim: Another miss for me. I have never liked Static and it will take an awesome first issue to get me to the second issue. The “young” DC super hero stuff is not giving off a good vibe to me.
Gwen: Eh, this character never did much for me but I find it interesting that it made the cut - perhaps it appeals to a younger audience than myself.
Thomm: Don't know the character or the team, so not a wiff of interest.
Matthew: It's the new "Blue Beetle". Really, this could be very good, little to no continuity baggage and Scott McDaniel always has a great style. 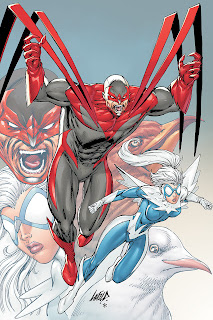 HAWK AND DOVE #1
Written by STERLING GATES
Art and cover by ROB LIEFELD
On sale SEPTEMBER 7 • 32 pg, FC, $2.99 US • RATED T
Hank Hall is not happy. He’s not happy to have Dawn Granger as a new partner in his war on crime. He’s not happy that she’s dating the ghostly Super Hero, Deadman. He’s not happy to learn that someone is trying to plunge the United States into a new civil war! Now it’s up to Hawk and Dove to root out the forces behind this conflict and stop them before they turn the U.S. into a wasteland!
And who is the monster lurking in the shadows, watching Hawk and Dove from afar? Find out in this new series from Sterling Gates (FLASHPOINT: KID FLASH LOST) and artist Rob Liefeld (X-Force, Youngblood)!

Gates talks HandD.
Jim: Blechh – Rob Liefeld. I hate his stuff, he can’t draw and this looks to be a train wreck. I feel sorry for Gates being stuck with Liefeld as no matter how good the story I want be able to stand to read it. This is a first issue I may have skip.
Gwen: I've grown to like these characters - especially Dove, but the art may kill it as if Jim can't stand it the book won't be making it's way to Maryland.
Thomm: Based on that cover I'd have thought Hawk's first concern was that someone shrunk his head.
Matthew: I still have fond memories of New Mutants #87, which I picked up at a 7-11 on the way to Surveying class. Just trying to offer up something positive. His art isn't my favorite, but I can tell you he'd be a welcome addition to Logan's Run: Aftermath!!! 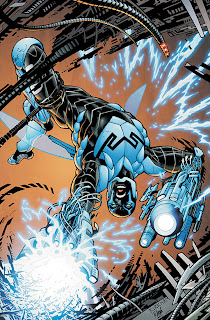 BLUE BEETLE #1
Written by TONY BEDARD
Art by IG GUARA and RUY JOSE
Cover by TYLER KIRKHAM and SAL REGLA
On sale SEPTEMBER 21 • 32 pg, FC, $2.99 US • RATED T
It’s not easy being Jaime Reyes. He has to deal with high school, family and all the drama that comes with being a teenager. Also, he’s linked to a powerful scarab created by an alien race known as the Reach who seek to subjugate planets – or annihilate them. It’s up to one teen hero to turn this instrument of destruction into a force for good.

Jim: Sounds like Blue Beetle made it though unscathed. I like Jamie as the Blue Beetle and look forward to him having another chance of going solo. Bedard has done some good work lately and I have hopes for this series.
Gwen: Yay! Jamie stays Blue Beetle and gets a series of his own again! I am very excited about this :)
Thomm: Now here's your youth oriented series that has some potential. Jaime's been a reliably good character since his launch. More interesting than the previous Blue Beetle iterations to me.
Matthew: It's nice to see that one of the "new" guys has staying power.