Lee: Yep, another month of Image getting it's own post. I don't know what's changed but Image has been putting out some really good offerings this year.
Thomm: Hey, look at that. Image is out of the category of Independents for two consecutive months. 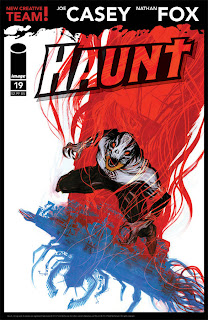 HAUNT #19
story Joe Casey
art / cover Nathan Fox
32 Pages / FC / $2.99
An All-New Creative Team Kicks Off With A Bold New Direction! Brothers Daniel and Kurt Killgore have shared an ominous power, but things begin to unravel – for both of them – when a past tragedy comes back to haunt them. All-new action! All-new enemies! The new nightmare begins...NOW!
Lee: For me Casey is always a treat even if his material is very hit or miss. Nathan Fox reminds of Paul Pope with a real fluid, scratchy style. I didn’t really care about the character but with this creative team I am going to have to check it out.
Thomm: I’ve been reading this one since the launch. It’s major drawback up until now has been the artist’s proclivity for drawing one standard face and form for all the female characters, with only hair and skin coloring to distinguish them. The plot and writing have been a lot of good stuff, not surprising with Kirkman at the helm, so a new artist should be good, but now I’m concerned about whether the writing will suffer. Guess I’ll just have to give it a shot. 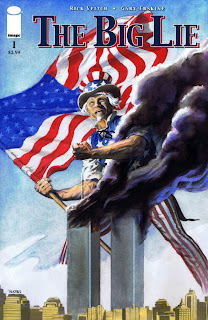 THE BIG LIE #1
story Rick Veitch
art Rick Veitch & Gary Erskine
cover Thomas Yeates
32 Pages / FC / $2.99
A lab tech travels back in time to the morning of Sept. 11, 2001 to try and get her husband out of the world trade center before it falls, but will the facts convince him before it's too late? A riveting tale of 9/11 by award winning master storyteller Rick Veitch that exposes “The Big Lie!”
Lee: And here we go! Our first conspiracy comic about 9/11. Maybe that isn’t the plot but it certainly reads like it. Now if only we could get a comic about Obama not being born in the US, my life would be complete.
Thomm: Other than the title, this doesn’t sound like a conspiracy theory to me. In fact, from the synopsis I can’t quite figure what the lie is in the title. Still, I like Veitch so it should be interesting. 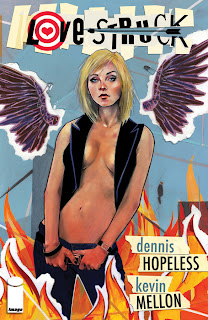 LOVESTRUCK OGN
story Dennis Hopeless
Art Kevin Mellon cover Erik Jones
192 Pages / BW / $16.99
It's a love story, but not like you think. There's no boy meets girl or star-crossed soul mates. Love is a billion-dollar industry. Cupid's the megalomaniac CEO. And Kali Monroe gets paid to break your heart. Love is all around us. These are the pricks who control it.
Lee: This sounds more like a Vertigo title than anything else. Maybe with Vertigo disappearing, Image will pick up the slack. That wouldn’t be bad at all.
Thomm: Well now I’m wondering what you’re talking about. Where’s Vertigo going? Oh, and the book at hand? Could be good if it’s not caught up in its attitude at the expense of a coherent story. NEAR DEATH #1
story Jay Faerber
art Simone Guglielmini cover Tomm Coker
32 Pages / FC / $2.99
Markham is a professional killer who has a near death experience during a botched mission. Determined to avoid ever returning to the Hell he glimpsed, Markham dedicates himself to balancing the scales. He's going to save a life for every life he's taken. And he's taken a lot of lives... A new ongoing crime series for fans of Criminal and the novels of Lee Child and Robert Crais.
Lee: Faerber, writer of Dyanmo 5, is back with another tale! I have really enjoyed Faerber’s work and it’s been way more hit than miss. I can’t wait to see this.
Thomm: I miss Noble Causes and Dynamo 5 doesn’t come around often enough, so this is a definite good thing to check out. Interesting premise, too. 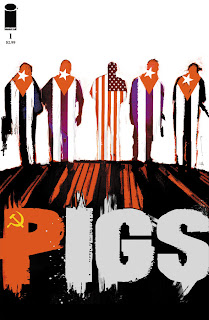 PIGS #1
story Nate Cosby & Ben McCool
art Breno Temura cover Jock
32 Pages / FC / $2.99
Issue One: Hello, Cruel World. A KGB sleeper cell has been in Cuba since 1962. And now they’re coming to kill you. Nate Cosby (Marvel), Ben McCool (Choker, Memoir) and hotshot newcomer artist Breno Temura present PIGS, an ongoing series set to join Image’s elite ranks. Terrorists have descended on America, assigned to destroy everything in their path…but why, and why now? You can read the USA today preview here (Yes that USA Today).
Lee: Pigs is another series that has lots of potential. I’m surprised they started a media push in April for a book that wasn’t solicited for release until September but hey, that’s just me. It looks and sounds interesting enough to make me want to try it.
Thomm: I’m stuck on the premise, and that’s even after reading the USA Today article. Sleeper agents from Cuba in the US? These guys would be kina old to be going off on missions now. Plus, the article says they’re meeting Americans for the first time when they go off on their missions, and the teaser above says they were sleeper agents in Cuba. I get the feeling these guys don’t know what a sleeper agent is. If they really are sleeper agents they should have been in the US for almost 50 years now. Other things in the USA Today article also make me think these guys aren’t too familiar with the history involved. I’ll pass.

Lee: I hope the trend of quality books continues at Image. They are starting to show up on my pull list more and more.
Thomm: Wow, no horror. Ok, Haunt’s sort of horror. More super hero/spy than horror, though.
Posted by Lee at Wednesday, July 20, 2011