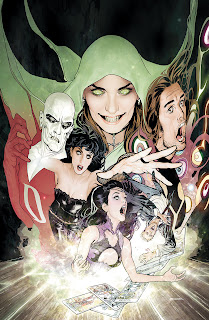 JUSTICE LEAGUE DARK #1 Written by PETER MILLIGAN Art by MIKEL JANIN Cover by RYAN SOOK
On sale SEPTEMBER 28 • 32 pg, FC, $2.99 US • RATED T
The witch known as The Enchantress has gone mad, unleashing forces that not even the combined powers of Superman, Batman, Wonder Woman and Cyborg can stop. And if those heroes can’t handle the job, who will stand against this mystical madness?
Shade the Changing Man, Madame Xanadu, Deadman, Zatanna and John Constantine may be our only hope – but how can we put our trust in beings whose very presence makes ordinary people break out in a cold sweat?

A Peter Milligan interview about this.

Jim: This I love. First off DC is giving us some diversity in their offering. It is not just are pure cape and cowl material. Taking these less then “A” list characters and sort of doing a “Shadowpack” thing via the Justice League sounds very cool. Peter Milligan is an excellent choice for the writer and I hope Janin can be the right artist for the job, as a generic super hero style would not fit.
Gwen: I see this as an upgraded Shadowpact - but I really liked Shadowpact so this is a pretty neat idea.
Lee: A Vertigo version of the JLA. I love it. This should be great because Milligan always has such bizarre ideas.
Matthew:Why not call it Justice League Supernatural? Marvel should have trademarked the "Dark" descriptor. It would be great if they showed the new JLA get beat down by the Enchantress, first, before this team forms. It does look promising. Although, I'm not promising to get it. 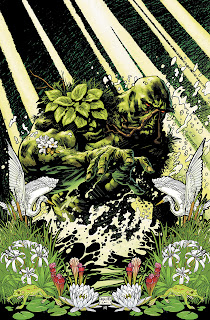 SWAMP THING #1 Written by SCOTT SNYDER Art and cover by YANICK PAQUETTE
On sale SEPTEMBER 7 • 32 pg, FC, $2.99 US • RATED T+
One of the world’s most iconic characters has returned to the heart of the DC Universe, and every step he takes will shake the foundations of the Earth!
Alec Holland has his life back…but the Green has plans for it. A monstrous evil is rising in the desert, and it’ll take a monster of another kind to defend life as we know it!

A quick word from Scott about Swamp Thing.

Jim: I would like to claim Scott Snyder as my love child from all those years ago, but she never called asking for child support, so I could be wrong (kidding Gwen and Jamie, you have no half sibling). The point is, this man can write and is already a star in the industry, wish I could say it was genetic. Scott has been excellent and given his horror bent and how well he has done with Detective I have high hopes for this book. Paquette I think is better suited for this type of book then he was on Batman Inc., so it looks like a win all the way around for this book.
Gwen: No half siblings that we know about.... I love Snyder's work - but I don't really care for Swamp Thing. So I wish Scott well on this endevour but icky Swamp Monsters just don't hold any appeal for me.
Lee: Anyone else and this would be a pass. But, if anyone can make it work, it's Snyder. Two for two today.
Matthew: A more Matthew-friendly (non-Vertigo) Swamp Thing book, FINALLY (I hope)! Plus, this with be my first Synder on-going. 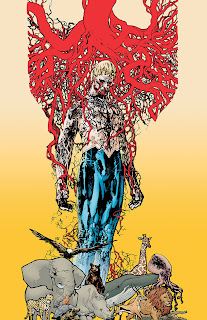 ANIMAL MAN #1 Written by JEFF LEMIRE Art by TRAVEL FOREMAN and DAN GREEN Cover by TRAVEL FOREMAN
On sale SEPTEMBER 7 • 32 pg, FC, $2.99 US • RATED T+
Buddy Baker has gone from “super” man to family man – but is he strong enough to hold his family together when Maxine, his young daughter, starts to manifest her own dangerous powers? Find out in this dramatic new series from writer Jeff Lemire (SWEET TOOTH) and artist Travel Foreman (The Immortal Iron Fist).

Jeff speaks out about Animal Man.

Jim: Jeff Lemire has been a heck of a find for DC also. Of course Jeff was a proven talent coming in the door with Essex County, which is some great material. Sweet Tooth is an excellent book and Jeff has been able to translate his strong story telling with Superboy, Atom and the Flashpoint Frankenstein book. Plus I loved the Animal Man series from years ago and I’m anxiously awaiting this book.
Gwen: It would be nice to get a good Animal Man series again. This character has a lot of untapped story potential so I'm hoping it goes well having him in his own series again.
Lee: Again, any other writer and this would be a pass, but I have confidence in Lemire. Hopefully this was his idea and not an editorial mandate. The child with powers them has been beaten to death between this title (back in the 90's) and again with Swamp Thing (Tefe anyone?). Lemire has his work cut out for him but I am willing to give him a chance. 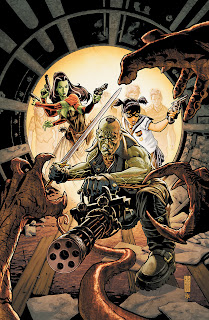 FRANKENSTEIN, AGENT OF S.H.A.D.E. #1 Written by JEFF LEMIRE Art by ALBERTO PONTICELLI Cover by J.G. JONES
On sale SEPTEMBER 14 • 32 pg, FC, $2.99 US • RATED T
It’s Frankenstein as you’ve never seen him before, in a dark new series from acclaimed writer Jeff Lemire (SWEET TOOTH) and artist Alberto Ponticelli (UNKNOWN SOLDIER)!
Frankenstein is part of a network of strange beings who work for an even stranger government organization: The Super Human Advanced Defense Executive! But can he protect the world from threats even more horrifying than himself? And since he’s vilified for who and what he is, will he even want to take on this mission?

Jim: This grouping just keeps making me happier and happier. During Grant Morrison’s Seven Soldiers work I loved the Frankenstein stuff and need to sit down and read the whole Seven Soldiers thing again one day soon. The Flashpoint stuff by Lemire with Frankenstein has already impressed and Aleberto is one hell of an artist. Unknown Soldier was the first place I saw Alberto’s work but he is a talent.
Gwen: Pass for me. Never much got into the whole Frankenstein thing.
Matthew:Hey, it looks like Frank is teamed up with She-Hulk and the ninja girl from the Honda Civic commercials! 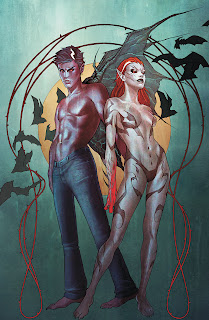 I, VAMPIRE #1
Written by JOSHUA HALE FIALKOV
Art by ANDREA SORRENTINO
Cover by JENNY FRISON
On sale SEPTEMBER 28 • 32 pg, FC, $2.99 US • RATED T+
For hundreds of years, vampire Andrew Stanton kept mankind safe from the horrors of the supernatural world, thanks to a truce he made with his ex-lover Mary, the Queen of the Damned. But now that truce has reached a bloody end and Andrew must do everything in his power to stop Mary and her dark forces from going on a killing spree – and she plans to start with the heroes of the DCU!

An Interview with Joshua on I Vampire.

Jim: Now I’m done with the whole vampire thing, but Scott Snyder showed us that it can still be a great story element in American Vampire. Add to that having Joshua Fialkov whose work I enjoyed on Elk’s Run and was a creator on Cleaners from Dark Horse and I’m pretty excited. I like seeing newer voices and Joshua is new for main stream Marvel and DC. I have no clue about Sorrentino’s art, but hey if DC is pushing the boundaries I’m will to jump in the water and try this series for three or more issues.
Gwen: Ah, like zombies before them we will grind the vampire stories into the ground until no one can take them anymore. Sure we still get the occasional good story but this one doesn't stand out to be thus far. I'll just have to wait and see if it turns out to be interesting. Like Jim I'd be willing to give it a shot.
Lee: Sigh, New DCU, same old slutty covers. Someone please explain why she is neekkid?