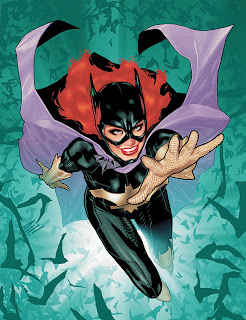 BATGIRL #1
Written by GAIL SIMONE
Art by ARDIAN SYAF and VICENTE CIFUENTES
Cover by ADAM HUGHES
On sale SEPTEMBER 7 • 32 pg, FC, $2.99 US • RATED T
Yes, it’s really happening!
Barbara Gordon is back as Batgirl – and she’s going to have to face the city’s most horrifying new villains as well as the dark secrets from her past. You won’t want to miss this stunning debut issue from fan-favorite BIRDS OF PREY writer Gail Simone!
Gail talks up Babs as Batgirl

Jim: This is a total shocker. The plus is Gail Simone is writing it, the negative is losing Oracle, as she is a better character then Babs as Batgirl. I have a feeling that this is some sort of cybernetic suit allowing her to be Batgirl again or some such comic book science nonsense, but all in all this just feels wrong. Of course the proof will be in the story and I’m going to cross my fingers and hope Simone makes this book work.
Gwen: I think a few years ago I'd have been all for this. Now though, we finally had a character that worked as Batgirl with Stephanie and Babs was more established as Oracle than she ever was as Batgirl. Also, Babs is a bit old to be Bat"girl". If anyone can pull it off it' s Gail Simone but I also think it's a bad call.
Lee: I'm not sure what to make of this. I was happy with Barbara as Batgirl. And the last Batgril title was so beloved at the LCS that I was ready to get the trades and catch up. A down side of the relaunch, now I don't buy trades released in the past year.
Matthew: I don't care for any of the these ancillary Batman books (hence my silence on [most of] the rest of these solicitations). I don't see how the Bat-verse (or anyone's wallet) can sustain them. I like a little more variety in my comics. If I just followed Batman, I wouldn't be able to follow much else.
Thomm: Now we're getting to something more my interest in the Bat world. Simone's the draw, once again. I don't really care who they make Batgirl.
Greg: I think chucking the Oracle identity is a bad, bad idea, but Simone is an excellent writer with a lot of love for this character. In addition, her online interactions have demonstrated she is well aware of the potential problems with this particular character's reboot, so its worth a look, because if anyone can pull this off (and I'm not convinced they can), its her. 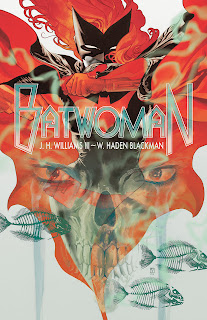 BATWOMAN #1
Written by J.H. WILLIAMS III and W. HADEN BLACKMAN
Art and cover by J.H. WILLIAMS III
On sale SEPTEMBER 14 • 32 pg, FC, $2.99 US • RATED T
At last! Batwoman’s new series begins, from the multiple award-winning creative team of J.H. Williams III and Haden Blackman!
In “Hydrology,” part 1 of 5, Batwoman faces deadly new challenges in her war against Gotham City’s underworld – and new trials in her life as Kate Kane.
Who or what is stealing children from the barrio, and for what vile purpose? Will Kate train her cousin, Bette Kane (a.k.a. Flamebird), as her new sidekick? How will she handle unsettling revelations about her father, Colonel Jacob Kane?

Jim: If any books should be ahead of schedule it should be Batwoman. This book has been rumored since the end of the series “52”. I have so many questions about this book and how the retro-con is impacting this book. I also wonder how much DC paid on pages of art that had to be trashed to start over again, if any. I hope Amy Reeder is still attached to this book as the co-artist as I miss seeing her work. All in all I have grown tired waiting for this book.
Gwen: I don't care for this character at all - the only reason I was ever interested was because of Any Reeder's art.
Lee: Soooooo, don't care about this book. Isn't this the 3rd or 4th time it has been solicited. They, the powers that be, have wasted all good will with this stupid book.
Thomm: And another Bat character I like. It's trying to follow in the path Rucka took with her stories in Detective, so I'm interested.
Greg: Look, the art on this thing is going to be amazing. And the extra lead time means it'll probably be monthly forever. But its another artist written book and while it COULD be good, DC's recent record of these has been spotty as hell. I'm with Thomm here, I wish Rucka was involved on this. His take on the character was very interesting. 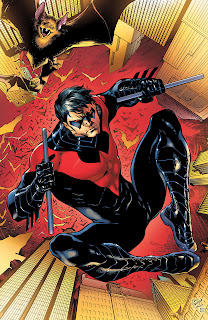 NIGHTWING #1
Written by KYLE HIGGINS
Art and cover by EDDY BARROWS and JP MAYER
On sale SEPTEMBER 21 • 32 pg, FC, $2.99 US • RATED T
Dick Grayson flies high once more as Nightwing in a new series from hot new writer Kyle Higgins (BATMAN: GATES OF GOTHAM)! And as he embraces his destiny, Haley’s Circus, the big top where Dick once performed, returns to Gotham City – bringing with it murder, mystery and superhuman evil. Nightwing must confront his past, among former friends and enemies from his circus days, while uncovering a much greater evil!

Jim: I hate this book. Dick is back to Nightwing, how boring. Not only that but Kyle “I never heard of you” Higgins is the writer and Eddy “could not hit my Superman deadlines” Barrow is the artist. And oh joy, oh joy, we are going to the circus! This is taking this character so far backwards I can’t stand it. I guess they can never let anyone grow up. I may have to make this character radioactive and just retire reading about him like I did when Devin Grayson screwed up the character and was campaigning to make him gay.
Gwen: Not only is this a terrible idea but I hate the new costume. Was Dick like - wow - Batwoman's costume is just so amazing I have to have it for myself? Also, are we ever going to get away from the whole circus thing? I mean seriously I am tired of this angle.
Matthew: "As he embraces his destiny...[of never being Batman for long]" -- That's so pathetic.
Thomm: Didn't care about Dick Grayson much before. Don't care much now. No draw on the creative team, either.
Greg: Woah, woah, chill out guys. I'd rather have him as Batman too, BUT Gates of Gotham has been pretty good and its focus has been on Dick, so I'm actually interested enough to give this book a chance. I hope the costume color is just an artistic choice though, cause if he's a bad guy or at odds with Batman again, THAT'll be super boring. I'd rather watch a "Data goes evil/crazy" episode of Star Trek before I read about that again. 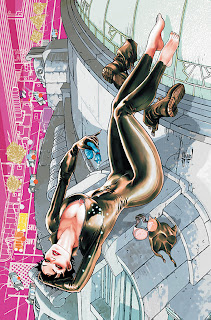 CATWOMAN #1
Written by JUDD WINICK
Art and cover by GUILLEM MARCH
On sale SEPTEMBER 21 • 32 pg, FC, $2.99 US • RATED T+
Meet Catwoman. She’s addicted to the night. Addicted to shiny objects. Addicted to Batman. Most of all, Catwoman is addicted to danger. She can’t help herself, and the truth is – she doesn’t want to. She’s good at being bad, and very bad at being good. Find out more about what makes Catwoman tick in this new series from writer Judd Winick (BATMAN: UNDER THE HOOD) and artist Guillem March (GOTHAM CITY SIRENS)!

Will Winick be purr-fect for Selina? He says read it.

Jim: Guillen March’s work has always been just okay for me and in a good girl type comic the artist needs to be more akin to Dave Stevens. Winick can do some good stuff, so I have hopes for this series, but it feels like it could bomb because they seem to be pushing all of the characters backwards and Selina as pure jewel thief does not carry a series.
Gwen: Let's face it - 80% of the time Catwoman works better in a supporting role. I'd give the series a chance but Selina hasn't held my interest much in the past in her own book so I don't have high hopes for this one either. Still, Winnick is an interesting choice so I'm interested to see his take on the character.
Lee: I loved the last Catwoman series and it will be hard to top that. Then again, Brubaker wrote the last series so maybe it isn't a fair comparison. But, if this is anything like the recent Zatana series which was a DC t&a book, I shall pass. I officially became too old (still younger than Jim and Thomm though) when I felt that Zatanna was only marginally better than Tarot in terms of sequential story telling.
Thomm: Ha! I've only read other people's descriptions of Tarot, but Zatanna would have had to fall a long way to reach that level. I've never thought Selina was an interesting enough character to carry a series. Pass.
Greg: Oh Ed Brubaker, where art thou? Decent talent on this book, but I'm not sure either is a great fit. Pass. 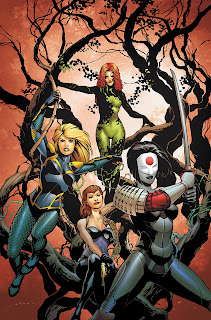 BIRDS OF PREY #1
Written by DUANE SWIERCZYNSKI
Art and cover by JESUS SAIZ
On sale SEPTEMBER 21 • 32 pg, FC, $2.99 US • RATED T
One is wanted for a murder she didn’t commit. The other is on the run because she knows too much. They are Dinah Laurel Lance and Eve Crawford – a.k.a. Black Canary and Starling – and together, as Gotham City’s covert ops team, they’re taking down the villains other heroes can’t touch. But now they’ve attracted the attention of a grizzled newspaper reporter who wants to expose them, as well as a creepy, chameleon-like strike team that’s out to kill them.
Don’t miss the start of this hard-hitting new series from mystery novelist/comics writer Duane Swierczynski (Expiration Date, Cable).

Jim: I never understood why DC canceled this book two times ago when Gail had it clicking on all cylinders. The last incarnation was only marginal, so I’m okay with seeing a different take on the group. Duane has been okay with some stuff and Saiz is a great choice for a good girl book. I’m hoping Zinda (Lady Blackhawk) is still floating around as she is a great supporting cast member.
Gwen: I think I'd probably be more open to this if I knew much about the characters outside of Black Canary (and is that Poison Ivy in the background?). I'm not sure if this book will work without Oracle as she was really what tied the Birds together before.
Lee: This is a book I am looking forward to. I've like Swierczynski's other stuff and I bet this is going to be grim and gritty as all get out. My only concern is how long will he stay. He's only done one long run on a series, 25 issues of Cable, there's a chance he won't be here for more than 6 issues. But, I am still excited and I'll be happy with 6 issues.
Thomm: This bears little resemblance to the predecessor books of the same name, which I guess is what DCNu is supposed to be about. With no Oracle I'm not sure what distinguishes this from a slew of other team books.
Greg: This creative team is a bit hit or miss, but the concept is intriguing. Probably worth a look.