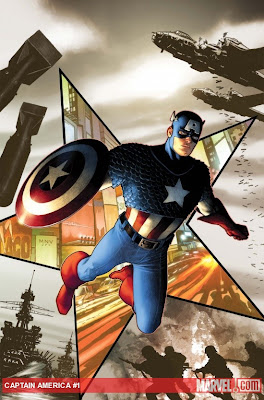 It’s been about 20 issues since I last bought Captain America, stopping around issue #601. I had jumped on the Brubaker bandwagon at the beginning of the 2004 series. (Wow, I can’t believe it’s been seven years already – That’s a tremendous accomplishment!) However, by the time I quit the Bucky Cap storyline was floundering a little bit and I was also really disappointed with the first few issues of the Reborn mini-series. I didn’t really go away completely, because I’ve been following the intervening issues at the library and even purchased the Reborn HC a few months ago (although I’ve already passed it on to a friend). Anyway, this week I picked up the latest number one issue of Captain America (Is this the sixth series?). It was EXCELLENT and I’m BACK with CAP!

Really, I’m getting a LOT of Marvel titles right now (TOO many -- my total this week was a whopping $40, which is VERY expensive for me). I also blame Greg and his Avengers: Earth’s Mightiest Heroes cartoon post from April. The series premiered on Netflix last weekend and I watched all 26 episodes of the first season from Saturday through Thursday. It was AWESOME!!! So, I couldn’t resist picking of the related TPB for $15 this week too. That and the $1 Cap (volume 3) back issues. Yes, I’ve been going Cap crazy over the last month in anticipation of the film opening NEXT WEEK! But, I digress…

I know Steve McNiven is a prominent artist, but this is really the first book that I’ve ever purchased with him on it. I’ve got to say I was totally blown away by his beautiful renderings. You can’t ignore the contribution of his inker, Mark Morales either. The use of blacks is exceptional, especially contrasting with the negative white spaces. Neither can you discount Justin Ponsor’s spectacular coloring. The image below (one of my favorites) shows just the inks, but when you see the finished product – WOW! The coloring really enhances the line work. The lettering is great too. Basically, the whole package is wonderful (I’m running out of descriptors here). This is a team supreme. 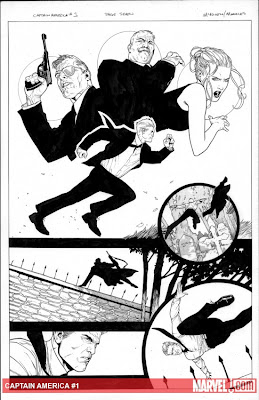 The art isn’t just pleasing to the eye; it’s great storytelling. The panel layouts are awesome and very diverse. Sometimes there are only a few per page, but McNiven really communicates a lot with a little (just like Kirby did in the late 60’s). Nothing is wasted. Oh, and the use of circles (I LOVE CIRCLES), they just POP off the page. I love the little details too. We’ve always seen Nick Fury with his scruffy stubble (the original five-o’clock-shadow character), but here we see him scratching it, repeatedly – very realistic. The action sequences are amazing (see below for a couple of prime examples). 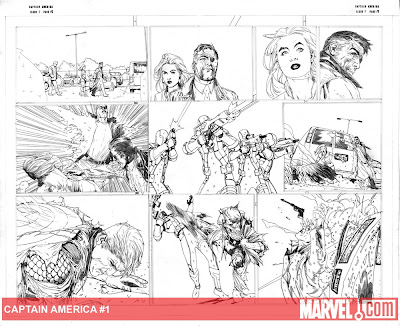 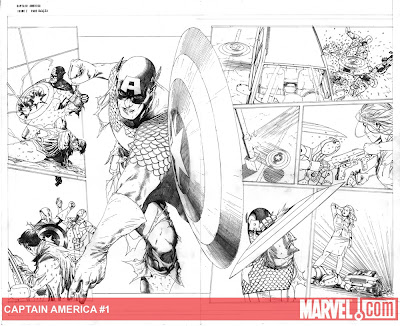 The story itself is very accessible for a lapsed reader like myself. I don’t think there was a single mention of “Sucky”…I mean Bucky Cap (I still can’t believe they killed him off in Fear Itself – What a waste!). It was like Steve never died or stopped being Captain America. I really enjoyed the camaraderie between Steve, Sharon, Nick and Dum Dum. Peggy Carter’s funeral was a great setting to start and to put Steve in a retrospective mood. The calm before the action explodes. I’m not sure what to make of this random new “hero” character from the 40’s, Codename: Bravo (What kind of name is that?). It’s a total retcon and an excuse to bring in a new/old antagonist. Despite my misgivings, I had no qualms about the villain he’s working with…Baron Zemo! He’s always been one of my favorites and he’s a very complex character following Busiek/Nicieza’s run with him in the Thunderbolts. (Check out the Tom Grummett Zemo mini-series from a few years ago – it’s fantastic.)

Grade A+: Brubaker continues his run of excellence, coupled with the exceptional artistic team supreme of McNiven, Morales, and Ponsor. A perfect number one issue and a great starting point for old fans and new ones. 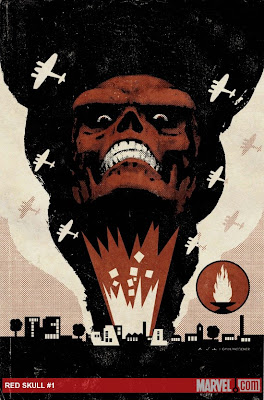 I also wanted to give a quick shout out to Red Skull: Incarnate, the five-part mini-series that premiered last week. It’s written by Incredible Hulk scribe, Greg Pak, and drawn by Mirko Colak with colors by Matthew Wilson. This is the ultimate Red Skull origin tale and will delve into how someone becomes the “Marvel Universe’s most evil villain”. The first story shows Schmidt’s virgin encounter with Nazis, dealing with the abuse of the orphanage system, and killing in rage for the first time. It’s a compelling story firmly set in the time period. Pak has indicated that he’s trying to be as historically accurate as possible. The art is fantastic too. It wasn’t on my radar at all, but it’s NOT TO BE MISSED.
Posted by Matthew at Saturday, July 16, 2011