Continued from some other day. 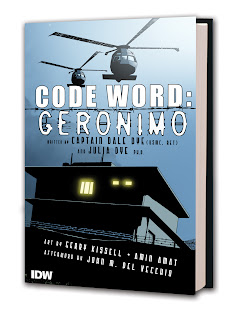 CODE WORD: GERONIMO HC
Written by Capt Dale Dye (USMC, Ret); Julia Dewey Dye, PhD; John M. Del Vecchio, art and cover by Gerry Kissell, Amin Amat.
The leader of SEAL Team 6 uttered, "Geronimo," and the world let out a sigh of relief. The symbol of ultimate evil was no more. Code Word: Geronimo is the amazing, moment-by-moment story of the clandestine raid on Osama bin Laden's compound in Abbottabad, Pakistan. This historical keepsake commemorates the bravery and valor of SEAL Team 6 as it descends into a foreign land and achieves the near impossible. 88 pages, $15.99.
Lee: WOW! This didn’t take long to get into print. I thought it would have gone the autobio, NYT’s route but I’ll take it as a comic. I’m not sure it’s a “historical keepsake” but I bet it’s pretty good.
Thomm: A lot of gamble here, albeit for only $16. Still, I have no way of knowing how accurate or complete this will be. First tellings of previously untold tales don’t have a great track record for quality, especially when so close to the event in question. 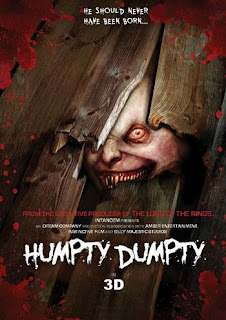 HUMPTY DUMPTY OGN
Written by Billy Majestic, art by Jordan Joranov, Angel Dimitrov, Yasen Denev, Venelin Dinkov, covers by Jordan Joranov.
Adapting the forthcoming feature film, two backwoods brothers ambush a landing party of extraterrestrial beings on their swampland, killing the males and taking the lone female captive. After months of torturous imprisonment and misconduct, she becomes impregnated by one of the sadistic brothers and dies giving birth to a monstrous, half-alien, half-human, egg-shaped creature with extraterrestrial powers, bent on bloody revenge -- Humpty Dumpty! 88 pages, $14.99.
Lee: I don’t know if you saw on the image but the movie poster says “From the executive producer of Lord of the Rings.” Seriously? You make the LotR’s and then you make this?
Thomm: There has to be a black humor angle here. No one could put this out as something to be taken seriously. 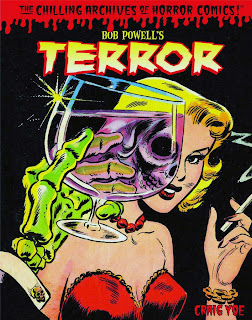 THE CHILLING ARCHIVES OF HORROR COMICS: BOB POWELL'S TERROR HC
Written by Craig Yoe, Bob Powell, art and cover by Bob Powell.
Cult-favorite Bob Powell was a master 1950s horror cartoonist delineating some of the most imaginative and incredibly drawn comics in the genre. His terrifying ghouls were as gruesome as his tantalizing girls were gorgeous! The introduction is by Eisner winner Craig Yoe and details Powell's comics career with extensive and revealing quotes from a recently discovered manuscript about his work penned by Powell himself.
The front matter is profusely illustrated with rare ephemera and flawless reproductions of Powell's original art. Bob Powell's Terror prints a generous amount of horror comic stories carefully scanned and reproduced from vintage horror-era comics, many of them quite rare and expensive -- if you could even find them! This beautifully designed 148-page library-quality full-color hardback book is volume two in The Chilling Archives of Horror Comics series. 148 pages, $21.99.
Lee: I am loving these horror archives! The first was Dick Briefers Frankenstein which was excellent. Now comes a collection of Powell’s work. Powell is an incredible artist who had a gift for horror stories, amongst all his other work. Great stuff and well worth the money.
Thomm: Definitely an excellent price for the volume of material. 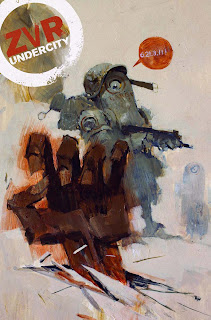 ZOMBIES VS ROBOTS: THE UNDERCITY HC
Written by Chris Ryall, art by Mark Torres, covers by Ash Wood. The robot forces are losing the war against these rotting masses, which leaves only one choice-- head underground... never mind the fact that a possibly even greater threat is looming in the survivors' UnderCity shelter! It's all-new zombie-on-robot carnage in this collection of the four-issue series!
104 pages, $24.99.
Lee: I have the first two hc’s in this series and they are a ton of fun. A light, fun filled, destruction filled romp with great art. The hc’s are oversized too so Wood’s art looks even better. Kind of an art book more than a plot book, but still lots of fun.
Thomm: Never heard of it, and telling me it’s light on plot isn’t going to draw me in. 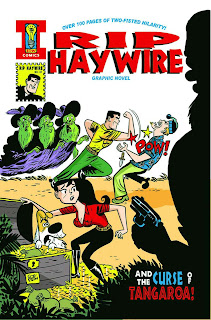 RIP HAYWIRE OGN
Written, art and cover by Dan Thompson. Action! Danger! Dysfunctional Romance! The adventure comic strip is back -- with a twist! Rip Haywire is a soldier of fortune, a contemporary adventure hero in the classic mold: a brave, square-jawed man of honor who lives for danger. Accompanied by his cowardly dog TNT and his venomous ex-girlfriend Cobra, Rip tracks down lost treasure, takes down madmen, and accepts any job that promises heart-pounding action, danger, and intrigue--and cash! Written and illustrated by Dan Thompson, Rip Haywire is wired for laughs! 112 pages, $12.99, Read the strip here.
Lee: This is kinda like a twisted Mark Trail and I like that. The art is solid and this is one of the few web comics that appears to have made the leap into newspaper. Check out the strip at the link and I bet you will like it too.
Thomm: Mark Trail’s pretty twisted, albeit unintentionally.
Lee: More and more, IDW is becoming my preferred publisher. The wide array of material they offer is just fantastic. This is going to hurt my budget again this month.
Thomm: Less horror than I expected from Lee’s intro. A good mix of other genres, really.
Posted by Lee at Tuesday, August 16, 2011