The Killer Vol 2 - Reviewed AGAIN by a non Comic Guy 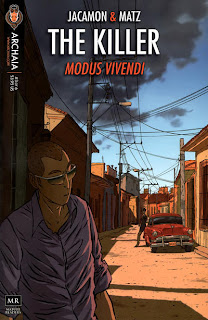 From yesterday… The Killer is good, but what's the difference between 'mediocre' and 'great'? What separates movies like 'Ghost Rider' and 'Dark Knight'?
Well, intent. Ghost Rider was a premise that held promise, but became a f**king mess. The Dark Knight was about Batman, but also about civilization, nihilism, civil liberties and security. It handled its themes deftly, so that it wasn't preachy, but you got the creator's message. The Dark Knight was indisputably great. The Killer aspires to the same level of seriousness, but, compared to something indisputably great, like The Watchmen, it fails.
Like an Oliver Stone movie, the book has all the right ingredients to be a masterpiece, but succumbs to its creator’s tendency to soapbox various propaganda and half baked conspiracy theories which derails its chances of becoming a masterpiece. But, even with the political leanings, a book can still be great if the story is good, and the story in this book is good. Basically, the Killer comes out of a beautiful beach retirement because he is tired of not killing people, and then accidentally gets caught up in some serious international espionage. OK, awesome, and the story plays out well and nothing feels to out of place, but there's just a glitch in the awesome matrix. I can't stand the protagonist.

I know The Killer is an anti-hero, not Gary Cooper, and usually that's something I am all over.  But in this comic I actually got to the point where I hated this guy, not because he kills innocent people (seriously, that's cool), but because of his bullsh*t attitude.  I like hypocrisy in my hero, because I can relate, but, if this novel is to be believed, everyone enjoys murder just as much as the killer and innocent people enjoying their day to day lives are just as culpable for the world’s ills as this d*ckhead.  Alright dude, I get it...people do bad things...now shut up and quit shooting nuns. 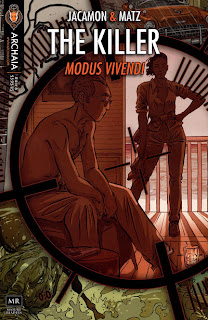 More distressing; I don't see any evidence anywhere in the comic that the author's believe that our killer is anything but a kind of a noble outcast, who, by rising above the double standards and hypocrisy of society, has his individual sins excused by...the sins of society?  What?  I don't get it either.  You are reading a book about a murderer who complains about man's capacity for murder.  Half the book bitches about man's nature and then, with the cynicism of a smart ass teenager, spends the rest complaining about the societies which neuter or protect other, less murderous men, from those unable to restrain these urges.  This is supposed to be enlightening?   This is deep? No, it's juvenile.
The book doesn't seem to recognize this and continuously takes a position that sympathizes with the Killer, all the while unaware of its own hypocrisy.  Capitalism is the worst thing ever, bemoans the child murderer sipping Champaign on a first class flight, and again in a luxury Parisian hotel watching news on his iPad.
As an out and out villain, The Killer could be a sane Joker, and that'd be awesome.  Someone who sees man's capacity for good and evil and just chooses the more exciting route.  As a protagonist, there's to much put in that makes him unlikable.  The Joker is fun to listen to as he rolls around laughing in his insanity, but the Killer is just a pompous, arrogant blow hard, an English Lit major mixed with a Jersey Shore greaser, capable of shooting a moving target from a skyscraper. 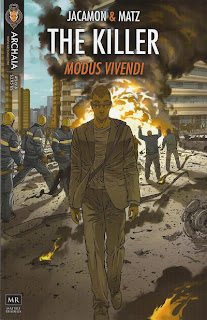 Actually he is worse than insufferable, but only one person in the novel, the Cuban mistress, calls this man what he so obviously is: a psychopath.  The Killer justifies his murders, infidelities and abandoning his son by constantly comparing his sins against various societies’ worst moments, and the creators clearly encourage and endorse this view.  An especially (unintentionally?) hilarious exchange occurs when The Killer was questioned by his friend about the Cuban he started sleeping with, and what his wife thinks of this arrangement.  The Killer replies:
"Your ideas are really middle class, you know that? All those tidy little boxes in your brain. Marriage, fidelity- you're not going to tell me you believe that BULLSH*T, are you?"
Now, I don't care how a man gets laid, or how many girlfriends or boyfriends a person happens to have.  I have read plenty about human sexuality, and I know like everyone else, that monogamy is not an urge innate in many people.  I get that, but I still wonder if the Killer's baby momma, living in a mud hut in the jungle with a toddler without running water, toilets, toilet paper, dentists, doctors, money, and a steady source of food would share his sentiments if she knew the Killer was spending his evenings in Havana with a more attractive younger woman.   Again, and I hate to be repetitive, the creators encourage this thinking, as the woman not only accepts these conditions- but EMBRACES them.  Tell me,-how many ladies with your child- would be comfortable with that arrangement? ZERO, that's how many.
In 'The Sopranos, Tony's atrocious behavior, which he always justifies in nearly the same manner as The Killer, is never condemned, but he is never given anything but his own lame excuses to shield himself against criticism. And paper thin excuses are all the Killer should have, but they are made into stone by the authors condescending tone.
I don't want to ignore the positives of this book, of which there are many.  As mentioned, once accepted, the plot is engaging; the villains keep leveling up in evilness, and the end left me wanting more.
The Killer might have been an a$$hole, but that is forgiven because he is one indisputably bad ass. The man is good at his job and it is a pleasure watching him work. He never misses with his insanely cool sniper rifle, the firefight scenes are drawn out so well it plays better than most action movies, and even more superb are the quiet moments of violence, when his merciless instinct is revealed. My favorite moment in the series involved a French speaking Hell's Angels of Quebec: 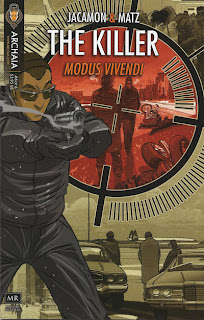 The Killer-"What should we do with this guy"
Hells Angel-"Please don't kill me, please!"
Marco-"What do you think?"
Killer's Gun-BLAM.
That is awesome. An anti hero at his best, doing what needs to be done when it needs to be done.  This thing is thick with metaphors and clearly a ton of time has been put into every page making this man as heartless as possible.
I was hating pretty hard earlier, but these guys are clearly not writing scripts for a film franchise, and they deserve kudos for that.  To give the creators a well deserved benefit of the doubt, this is the second volume of their story, and they are obviously fishing in some deep waters.  They are artists with a serious story to tell, and if the story goes anywhere positive, then the second story was just a set up for part three, and all my criticism will look stupid and worthless in a year. I accept that, and hope when the third novel comes out that they do make me look dumb (it's not hard) because, while I'm not convinced what they've hooked so far is a masterpiece, there's clearly talent enough for them to reel in a big one.
Posted by Lee at Tuesday, August 09, 2011