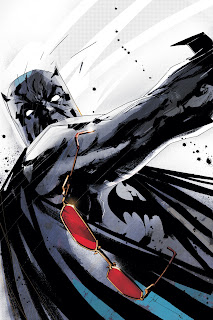 The final issue of Scott Snyder’s run on the Dick Grayson as Batman came to a close with this issue. This is the definitive run of Dick Grayson as Batman, one of the best runs on Detective Comic in a very long time and just a damn good comic. Hate to see it end, but love that the story had a beginning, middle and an end. I could feel the material was there to make this run go on longer, but it was a satisfying conclusion.

This issue the story is about James Gordon Junior. He is a psychopath to the nth degree who enjoys hurting people just to hurt them. The short story is James Jr. captures Barbara Gordon (his sister) and is killing her. Batman and Commissioner Gordon save her and Gordon is forced to stop his own son.

Over the course of the story we find out that James Jr. has had a plan since this whole arc began back with Detective #871. James Jr. saw that Gotham had a new Batman and realized it was Dick Grayson. James decided it would amuse him to come back and destroy Dick and his father. We find out that James was behind many of the things that happened over the course of the series.

What this book did so well is make James Jr. an unrepentant psychopath. Heath Ledger made us believe the Joker was a true madman in the Dark Knight, well Scott and Francesco (as he drew most of the James Jr. material) made James Jr. that creepy and that deeply sick. There are scenes in this issue with Barbara which are truly shocking as he reveals he has put knives into her legs at the femoral artery. She, of course didn’t know until he showed her because she has no feeling in her legs. Removing one allows her to bleed out rapidly as the knife staying in place was saving her. Maybe it is because he is a Gordon but there was a nagging notion in my head that maybe, maybe there is something good about him, but there is nothing. He is portrayed as a sociopath of the worst kind. When Commissioner Gordon confronts him he realizes his son is a lost cause and doesn’t hesitant to do what is necessary to stop him.

As with all great villains they help to define the hero. We get to see Dick as the hero who saves the day and he is defined as being the most compassionate of heroes, which we learn is his weakness. The comeback from Dick is a wonderful defining moment as Dick admits to wanting to see the best in people, but he planted a tracer on James Jr. because as he says he maybe a softy, but he isn’t stupid. Dick was a wonderful Batman as he was still learning the ropes about how much comes with the territory, but enough of a hero to rise above any failings and still save the day. DC missed the boat not leaving Dick as Batman as this is what they preach that they want a hero who is still learning so the danger feels more real. An argument I have made ad infinitum and will continue to do so.

If you missed this series, well you missed one of the best Batman stories in a long time. Luckily this will be collected in various formats by DC and you need to go out and buy it. Scott Snyder, Jock and Francesco Francavilla gave us a Batman story to remember. It also defined Dick Grayson, James Gordon, Babs and gave us an unforgettable villain with James Jr. I think this holds up with and in some ways surpass the O’Neil / Adams / Dillin story about Batman and Ras As Ghul. It is that good.

Thankfully we get to see more of Snyder’s work on Batman and Swamp Thing, not sure where Jock is off to for the moment, and Francavilla has been doing some great work for Marvel. Heck, I have followed him since Left on Mission from Boom lo those many years ago.

My Rating A+, Five Stars, 10 out of 10, Sure Fire Winner, Must Read, Pulitzer Prize material, Nobel Prize winner, jaw dropping, change the rotation of the earth, nothing will ever be the same. Okay, okay a little over hyped, but it is a damn good story that you should enjoy.