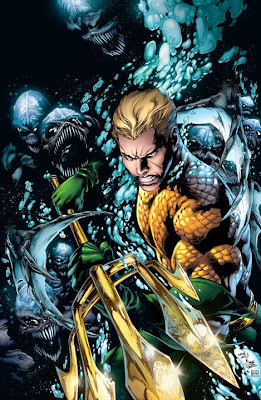 So not so long ago it was big news that DC Comics was going to reboot Aquaman with the a-list creative team of Geoff Johns and Ivan Reis.

Then they decided to reboot all their books and offend every woman on the planet, so this got a bit lost in the shuffle. But they’d been promoting this book for a while and even run a major company event running up to its relaunch, so its probably worth a deeper look.


Most of our readers will assume I’m ready to hate this book as I generally hate a) the DC reboot and B) Geoff Johns.

Well, the reboot is irrelevant to this book. This could have come directly out of Brightest Day in the old DCU and no one would have noticed. There is zero mention of other things in the reboot or Brightest Day here. And I’ve actually been a bit interested in this book. Johns’ strongest work in my opinion was his 25 or so issues on Hawkman. It was much heavier on character study than plot, which was a drastic change from Johns’ usual approach. Aquaman doesn’t have the sort of larger universe/cast that Green Lantern does, so I’ve actually got some hopes for this book.

On the one hand, relaunching Aquaman is tricky. Thanks to Superfriends, he is a character that is regarded as the butt of jokes, so you’ll have to address that somehow. In the 90’s, DC did that by cutting off his hand and making him a grim bad ass that embraced his Atlantean heritage and was at odds with the surface world. While I have a large amount of affection for that iteration of the character, it was probably a bit much.

Johns addresses it by having everyone else in the book address it on every other page. Bank robbers make fun of him, cops make fun of it, customers in a restaurant make fun of him, a blogger who is a PAINFUL stand in for derisive fans makes fun of him. I understand that this is the elephant in the room and Johns feels the need to address it, but he goes way overboard. While there is something to be said for addressing a character’s weaknesses, there is also something to be said for nothing highlighting them for more than 2/3rds of the book.

Johns’ take on Aquaman seems to be that of a respectful, responsible guy, shaped by his lighthouse owner father, somewhere between happy go lucky Superfriends Aquaman and hook handed 90’s Aquaman. As sick as I am of Johns’ characters and their issues with parents, I’m fine with this. We’ve explored Aquaman’s underwater heritage for the better part of 20 years and I’m fine with him being sick of Atlantis and their nonsense and at least temporarily embracing his surface heritage. And while the characterization could turn out to be a bit bland, the notion of him being kingly, but without a kingdom isn’t a bad one for Aquaman. Its just hard to focus on that when literally every character he interacts with other than his wife is making fun of him or underestimating him.

The other portion of this book is a new race of sea dwelling creatures. I don’t mind a new threat, but their whole deal seems to be eating people. It would be nice to read a single Johns book without some evisceration or dismemberment in it, particularly when the rest of the book has a pleasantly light that is a welcome relief from the last 20 years of the character’s stories as well as the grim, overly designed world of the DCNu.

Finally there’s the art, which looks fantastic. Ivan Reis is by a long shot, one of the finest artists in superhero comics today. It looks great, the storytelling is snappy, the action is amazing, and the characters are expressive. He’s like a cross between Alan Davis and Jim Lee, but without Jim Lee’s crippling inability to design a good looking costume. The action scene where Aquaman flips a stolen armored van with his trident is particularly awesome.

This comic isn’t as good as I’d like it to be. It dwells on the character’s reputation far too much and I’m not wild about the prospect of more Geoff Johns’ viscera, but I did like the characterization and the art is incredible, so I’m at least on board for the first arc. I’d love to be proven wrong.
Posted by Greg at Thursday, September 29, 2011