Lee: August was so busy for me that it’s a mish-mash of selections this month. Nothing ultra amazing but some stuff worth investigating.
Thomm: Worth investigating is good. Let’s see how good. 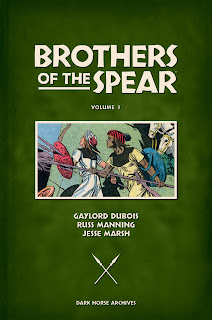 BROTHERS OF THE SPEAR ARCHIVES VOLUME 1 HC
Gaylord DuBois (W), Russ Manning (A), and Jesse Marsh (A)
FC, 272 pages, 7" x 10", $49.99
Young Natongo and his adopted brother Dan-El share a bond much stronger than blood, so when they learn of Dan-El’s true father and his lost people, they pledge to discover the secret of his birthright together. Their journey across Africa reveals danger at every turn, but nothing to match the shock of finding Dan-El’s home enslaved by an evil witch doctor. With only each other to fall back on, can the brothers of the spear survive battle, exile, shipwreck, and more to overthrow the usurper so Dan-El can take his rightful place as king? Collecting the backup stories from Tarzan #25–#67! Featuring art by comics masters Jesse Marsh and Russ Manning! A never-before-reprinted epic from comics’ golden age!
Lee: If it weren’t for Manning and Marsh’s art this would be a complete pass for me. As for the story, I betting it’s going to be pretty bad and simplistic. I appreciate that DH is reprinting this material but this is way pricey.
Thomm: But for the price, I’d like to get this. It’s from another era and I’m sure its attitudes about Africa are quite dated. Looking into the mind set of past eras is always interesting. Just not for $50. 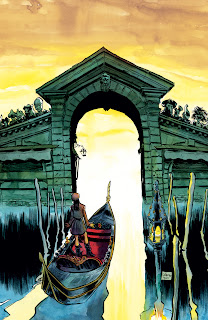 DARK HORSE PRESENTS #6
Fabio Moon (W/A/Cover), Peter Hogan (W), Carla Speed McNeil (W/A), Filipe Melo (W), Evan Dorkin (W), Jill Thompson (A), Neal Adams (W/A), Steve Niles (W), Robert Love (W/A/Variant cover), and David Walker (W)
FC, 80 pages, $7.99
Just when you thought it was safe to go back in the comic shop, Dark Horse unleashes another monstrous volume of comics from today’s greatest creators! Boasting a brand- new story by Brazilian wunderkind FÃ¡bio Moon, this volume also features the second of three new Beasts of Burden stories by Evan Dorkin and Jill Thompson! Throw in continuing stories by Steve Niles, Robert Love, David Walker, Carla Speed McNeil, Filipe Melo, Peter Hogan and Steve Parkhouse, and Howard Chaykin, and you’ll find yourself on the receiving end of another eighty-page dose of ad-free thrills!
- A brand new Beasts of Burden story and a new short by Fabio Moon!
Lee: I know the latest version of DHP has gotten mixed reviews but they continue to put top notch creators on the book which keeps me interested. A new story by Moon is fun, but a new Beasts of Burden by Thompson is just outstanding. That story alone will be worth the price.
Thomm: See, I’ve been enjoying this through its first three issues. And it’s a lot of stories for the buck, with the occasional interview thrown in, too. This one’s primary appeal appears to be Moon for me. 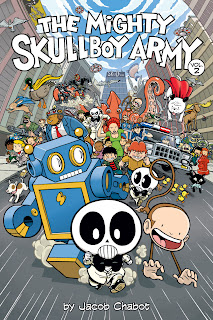 THE MIGHTY SKULLBOY ARMY VOLUME 2 TP
Jacob Chabot (W/A)
b&w, 128 pages, 6" x 9", $14.99
Skullboy is back with a second volume of manic fun, and the robotic, rascally Unit 1 and super-smart, simian Unit 2 await his orders. They’re ready to face any challenge that comes Skullboy’s way, from dodge balls to monster brawls but are you ready? Are you ready for necktie-wearing bears in thinking caps, ninjas in tuxedos, police chases, giant squid battles, time-travel showdowns, not-so-evil duplicates, vengeful pigeons, flying dogs, wrestlers, jungle commando clashes, and more? Well, are you?! That dull expression on your face doesn’t fill me with much hope. Well, when you can finally muster the courage and buck up, fill out that Skull Co. application and wait right here. Our secretary will be with you shortly.
- 2008 Eisner Award-nominee for Best Publication for Teens! A preview of the first volume here.
Lee: There seems to be a clash in targets here. The cover looks cutesy enough to be for kids but it is a book targeted for teens. Hummmm. This is volume 2 so it must be doing something right and the previews of Vol 1, while brief, hint at some very good humor.
Thomm: Ninjas in tuxedoes? Better yet, for Jim, it has a simian. 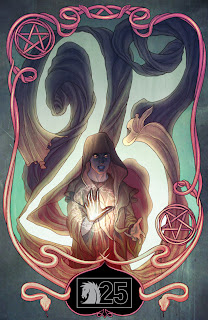 THE OCCULTIST #1 (of 3)
Tim Seeley (W), Victor Drujiniu (P), Andrew Dalhouse (C), Steve Morris (Cover), and Jenny Frison (25th anniversary variant cover)
FC, 32 pages, $3.50
While harnessing his new powers as the Occultist, college student Rob Bailey must defend himself and those around him from a series of hired Hit mages with unique magical abilities and a serpentine demon known as the Swordbreaker, all determined to kill him and to possess the powerful spell book known as the Sword! Written by Hack/Slash’s Tim Seeley!
Lee: The plot sounds generic Buffy-ish but I trust Seeley to make it good. And Victor Drujiniu’s art has been getting better and better. It worth taking a chance on the first issue.
Thomm: Agreed. I haven’t been reading any sword and sorcery stuff for a while, so this could be a good one to check out. 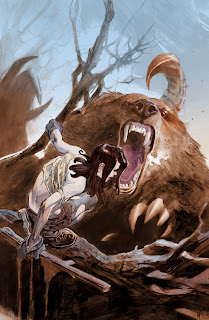 ORCHID #2
Tom Morello (W), Scott Hepburn (A), Dan Jackson (C), and Massimo Carnevale (Cover)
FC, 32 pages, $3.50, Ongoing
Orchid, along with her little brother and an unexpected ally named Simon, find themselves in unknown territory after they’re captured and sold by slave traders. Headed toward the feared Fortress Penuel, Simon must mount an escape plan if he’s going to rescue his rebel comrades and return the mysterious and powerful mask of General China to its rightful owner—a saint believed to save the oppressed from the wicked Tomo Wolfe.  A violent, revolutionary fantasy with a soundtrack by Tom Morello (Rage Against the Machine).
Lee: Since when did comics become the publishing house of musicians? There are more musicians writing material than ever before. I liked Rage’s music but, post Rage, Tom has never written the strongest of lyrics. If the story is as angry as his music then it should be plenty violent.
Thomm: Rage always had to be taken as hyperbole for me. A might too leftist, to the point of charicature. This isn’t calling my name at all. And General China? Sounds like a manufacturer of cheap products.

Lee: An interesting month. Nothing super strong but Skull Boy might fulfil my need for humor this month.
Thomm: Satisfying your not so inner teenager? I’ll go with DHP P and maybe The Occultist.
Posted by Lee at Wednesday, September 07, 2011