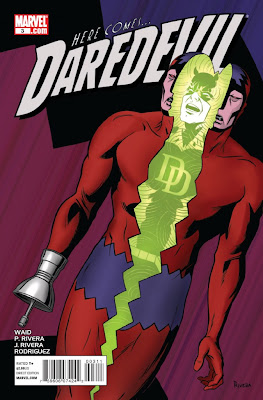 This is how superhero comics should be.

Mark Waid and Paolo Rivera told a relatively simple story over these three issues. After some recent unpleasentness, Daredevil has returned to New York to rebuild his life, both in the costume and out of it. He finds that his public outing of Daredevil has hampered his law career and his actions during Shadowland have made his fellow superheroes distrust him. In the course of investigating the case of a merchant who is the victim of police brutality, he runs afoul of Klaw, a supervillain made entirely of sound.

This all seems relatively simple, but it is anything but. In these three issues, Waid and Rivera establish a new status quo on the book, one that is immensely fun to read, but almost completely at odds with the grim and gritty tone that has defined this book pretty much since Frank Miller.

In the hands of a lesser writer, the book’s lighter, swashbuckling tone could feel like a bit of a jarring shift, but here it feels completely natural. It isn’t an abrupt swerve of direction, but a response to what has come before. Daredevil either has to change his life or kill himself. It acknowledges everything that has come before, but does so without hammering you over the head with it. It smoothly makes it part of the narrative while simultaneously staking out the new status quo.

The book also could teach every superhero book a lesson on how to use continuity. The book feels like an integrated part of the Marvel universe, but it never feels heavy handed. Mentions of past Daredevil continuity (Shadowland, the identity reveal, etc.) and what is currently going on in the Marvel Universe (Bucky on trial, Cap as “America’s Top Cop”) all show up, but they are all there to service the story that Waid is trying to tell for Daredevil. It never feels clunky or shoehorned in.

It’s also a short, fun story. It’s three issues long, so its got more meat on the bones than a one shot, but its got more pace to it than a 6 issue story arc. Matt is fun to read about for the first time in forever and the choice of villain is clever and interesting. We get some subplots set up, but we’re not hit over the head with them.

And best of all, the book is utterly gorgeous. Paolo Rivera’s art looks incredible and this is definitely the best looking book of the year. His storytelling is unparalleled and the details he works into fight scenes are amazing. Just look at the fight between DD and the Spot. DD grabs one of the spots arms and his thumb goes a little bit into one of the portals on the Spot’s arm and shows up coming out of a portal elsewhere on the arm.

This book is amazing and if you have any interest in superhero comics you need to be reading it. THIS is what superhero comics should be like in the 21st century.
Posted by Greg at Thursday, September 15, 2011