My trades purchases have finally gotten me close to the singles, but for issues 123-124, so I'm skipping few issues and moving into the hard sought issues that tell the story of Mutant X, aka Proteus. I spent a lot of years as a kid and young adult buying these back issues when I could find them and afford them. It's been a lot cheaper, in inflationary terms, to get the trades of the earliest issues of the new X-Men, but there was a certain element of fun to tracking these down.

This is the story that really sets the stage for the Phoenix Saga's conclusion about a year after this arc starts. The various elements of the X-Men realize they all survived the battle with Magneto in the Savage Land, though Xavier's still out in space with Lilandra.

One of the great things about these old issues is that there were always plenty of flash backs to fill you in on what you missed. It seems redundant when reading all of the story at once, but for a medium then not counting on trades for people to get the whole story, it was a nice thing to provide for your audience, which may have missed an issue or two.

Jean is in Scotland with Moira MacTaggert, testing her abilities. Madrox the Multiple Man works with Moira and Havok and Polaris are there, too. The Cyclops group realizes Jean and Beast are still alive when Beast comes to Xavier's School to check on things and finds them there. They call Moira right away when Beast lets them know that Jean is with Moira, but the line is cut when Cyclops is talking to Polaris, the last thing he hears being her scream. This is all in issue 125, which is set up for the Proteus story.

Proteus, son of Moira and Joe MacTaggert, Moira's estranged husband, has escaped his holding cell at her facility. He's a mutant who kills people in order to survive, by absorbing their bodies and taking on their appearance, albeit in a mummified sort of way. He has the ability to manipulate reality and an aversion to metal. When he absorbs a person, he absorbs the person's memories as well as the body, but doesn't lose those memories when the body burns out and he abandons it for 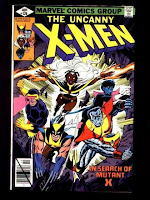 His attack on Phoenix only exacerbates the manipulations that Mastermind has been undertaking with Jean. He repeatedly has her believing that she's living the life of an ancestor in the 18th century. This English ancestor is an aristocrat, cruel and joyous member of the Hellfire Club, an organization dedicated to accumulating power.

When Cyclops, Wolverine, Colossus, Storm, Nightcrawler, and the powerless Banshee rush to Scotland, they end up battling Proteus across the countryside. His powers are especially effective against Wolverine's heightened senses, but no less so against the other members of the team. Only Moira recognizes the danger Proteus presents, but she's stymied in her effort to kill him because the X-Men, aside from Wolverine, don't kill. Proteus makes his way to Edinburgh with Moira on his tail.

Along the way, and following behind, Claremont and Byrne work the ongoing conflict between Wolverine and Cyclops about how the team should operate. Cyclops goads Wolverine nicely into an object lesson that draws in all the rest of the team, except Phoenix, and allows Cyclops to show how fighting together is more effective than fighting singly. It's a Danger Room excercise without the actual room. Phoenix is in on it and continues to display more power, akin to the levels she displayed in saving the universe two years' worth of issues previously.

Moira means to warn Joe, who's an MP and an unpleasant person with a grudge against Moira. He doesn't heed her warning and ends up being taken by Proteus. This means that Proteus has his own lack of feeling for humanity combined with his father's ill will towards his mother, so she's his next target.

In the final issue Proteus is bending the reality of Edinburgh for his own amusement while holding Moira hostage. The X-Men would prefer to be attacking Proteus, but have to spend a considerable amount of time saving the citizenry.

Aside from metal, Proteus has a real weakness in using his powers because the more he does, the more rapidly he burns up the body he has possessed. Over time the X-Men force him to burn out Joe MacTaggert's body. When Colossus, in his unarmored form, throws him up against a wall, the remains of MacTaggert's body crumbles to dust, leaving the pure energy form

of Proteus. Proteus tries to take over Colossus, but Colossus turns into his metal form, then punches into the center of Proteus's energy form, dispersing Proteus across the Earth's surface.

The story ends with the happy embrace of Banshee and Moira, and smiling X-Men, satisfied with their victory.

Like much of the preceding issues, this arc is really hitting on all cylinders. There are numerous character moments that bring out more of the individual personalities on the team. The plotting is consistently excellent and still feels like it's building to something bigger while telling an excellent stand alone story unto itself. Byrne and Claremont were an excellent team, bringing together story, dialogue and art in an excellent whole that encapsulates much of what drew me to comics as a kid and keeps me reading them today. There's nuance in the confused feelings of Cyclops and Phoenix, less so in the hard charging Wolverine, but even he shows the unexpected in his feelings for Phoenix, but more so in his fear of Proteus.
Ah, the glory years of the Uncanny X-Men. Would that they could have been infinite.
Posted by Thomm at Sunday, September 18, 2011