Lee: Another strong month as always from IDW with all sorts of different books in the mix.
Thomm: Hooray, different mix! I’ll be looking for more of that with the demise of Vertigo. 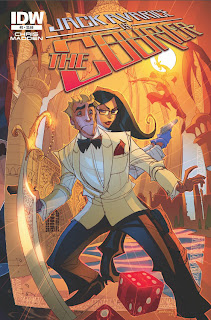 Jack Avarice IS The Courier #1 -2 -3 -4 -5 (of 5)
Chris Madden (w / a / c)
Spies, explosions, voodoo magic, deadly beauties, high-caliber thrills, and high-octane destruction... action-adventure has a brand-new name, and it's JACK AVARICE! The world of spies and intrigue is very much real and lies hidden just below the surface. But when a down-on-his-luck kid who dreams of a life like the movies meets the world's greatest secret agent, he'll discover the reality of spycraft is far deadlier and more explosive than any movie he could imagine—and he now has a starring role! The explosive five-issue miniseries starts here! By Chris Madden, artist on the upcoming Danger Girl series! This special 5-part series is being released weekly on all five Wednesdays in November! FC • 32 pages • $3.99
Lee: I find it interesting that IDW is getting a little bit gimmicky with a 5 week release schedule. That said, after this series Madden is going to work on Danger Girl so it looks like this should appeal to the same audience.
Thomm: Looks like fun, mostly. 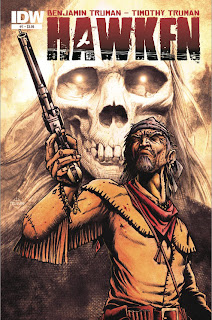 Hawken #1 (of 6)
Tim and Ben Truman (w) • Tim Truman (a / c)
Tim Truman returns to the Weird West! The industry legend teams with his son, writer Ben Truman, for a violent new tale of the supernatural! In the land of the lawless rode the soulless! Scout, hunter, raider, killer-for-hire: Kitchell Hawken has been many things—most of them bad. Scalped, tortured, and left for dead by the mysterious order called the Ring, Hawken returns, seeking vengeance… but surrounded by the ghosts of every person he's ever killed! Are the phantoms real, or illusions from Hawken’s blood-soaked past? Partial Color • 32 pages • $3.99
Lee: Truman is a master at telling, and drawing, compelling Western stories. It’s not a stretch for him as a creator but that’s ok because I know I will be getting a high quality product. If you like Jonah Hex then you will like this.
Thomm: Even better than Jonah Hex, in my opinion. I’ve been following Truman since Scout back in the ‘80s, and had the good fortune to meet Truman at Franklin and Marshall College. Never been let down by his work. 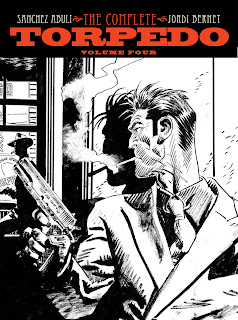 Torpedo, Vol. 4
Enrique Sanchez Abuli (w) Jordi Bernet (a / c)
Book Four of Abuli and Bernet’s masterpiece, Torpedo, continues Luca Torelli’s adventures in the stinking, crime-infested waters known as New York City. There Luca and his crony pal, Rascal, maneuver their way through a black comedy of murders, mayhem and an assorted series of misadventures, all the while breathing in the most authentic version of 1930s New York ever portrayed on the comics page! HC, B/W, $24.99, 144 pages 8.5” x 11”
Lee: I have all the other Tordedo books and they are great so there is no way I will miss this. Beautifully illustrated with some of the blackest humor around, this is not to be missed. And don’t worry if you missed earlier editions, most of the stories are stand alone!
Thomm: “Most authentic”? Verbal filler, but a strange choice. Sounds kind of like the Goon without the supernatural. 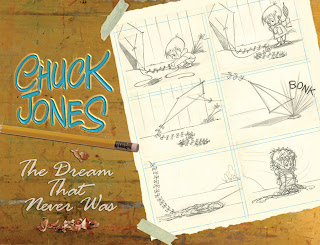 Chuck Jones: The Dream that Never Was (Crawford: From Conception to Storyboard to Newspaper Strip)
Chuck Jones (w / a / c)
Chuck Jones: The Dream That Never Was follows the twenty-seven year journey it took Jones to bring "Crawford," an accident prone, nine-year-old boy whose daily routine includes surviving his own boyhood, to the public, from conception to storyboard to newspaper strip. This incredible volume is loaded with never before seen sketches, drawings, storyboards and production notes, and the six-month run of the Crawford newspaper comic strip from 1978. Accompanying the artwork is a biography of Chuck Jones’s career in the sixties and seventies and how it influenced the creation of Chuck’s only foray into the world of comic strips.
Produced with the full cooperation of the Chuck Jones family, the book was conceived by Kurtis Finday, who says, “My first surprise when I started researching the Crawford comic strip was how little people knew about it. My second surprise was the treasure trove of Chuck Jones art we would find. Crawford just kept popping up in places I didn’t expect, making the history of this little-known character incredibly rich.” Chuck Jones: The Dream That Never Was is a dream come true in that almost all the art is being reproduced from Chuck Jones's originals! It is a treasure trove of previously unknown artwork that is a must for all fans of animation and comics. HC, PC, $39.99 228 pages 11” x 8.5”
Lee: Ok, this isn’t strictly comics but I love all of Chuck Jones’s cartoons. This looks like a fun addition to his legend, and a chance to see even more of his art and trade mark humor. I am not sure that I am going to be able to resist this.
Thomm: It’s a very interesting project, and something I’d like to read, but not necessarily something I’d buy. *hint, hint* 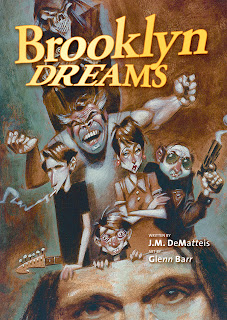 Brooklyn Dreams
J.M. DeMatteis (w) Glenn Barr (a / c)
The complete critically acclaimed saga is re-collected in hardcover for this collection of J.M. DeMatteis and Glenn Barr's Brooklyn Dreams. Celebrated by fans and critics alike, and long out of print, don't miss this chance to own a book that many say will change your life. HC, FC, $39.99 384 pages 6.625” x 10.187” Read a review of the book here.
This critically-acclaimed coming of age tale is re-presented as a deluxe hardcover, with a new cover illustration by Glenn Barr!   “J.M. DeMatteis appears as an adult narrator, hosting a series of flashbacks to the childhood and adolescence of a boy named Vincent Carl Santini. As seen through Glenn Barr's elastic, caricature-prone art, Santini's coming of age in a rundown New York neighborhood is a kaleidoscope of confusion, fear, hostility, and boredom.” — The A.V. Club
Lee: I remember this being very good for 90% of the book with the ending being just a little off. But, I dug out my tpb the other night and was once again amazed by the absolutely fantastic art by Barr. It’s worth getting and reading so the only question for me is do I upgrade the copy I already have.
Thomm: I’m volunteering for your trade if you do upgrade. I never read this but I’d like to. 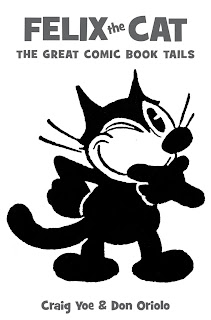 Greatest Felix the Cat Comic Book Tales
Otto Messmer (w / a / c)
Felix the Cat, the wonderful, wonderful cat! Felix's original artist, Otto Messmer, penned brilliant stories for Dell and Harvey during comic books' Golden Age. Well over two hundred pages showcase Felix's magic carpet trips to surreal lands, times past, and into Toy Land, as well as his hilarious domestic adventures, too. Felix the Cat's Greatest Comic Book Tales sports a fascinating foreword by Don Oriolo, son of Joe Oriolo, whose wonderful stories ran alongside Messmer's and are included in the book. Comic Historian Craig Yoe sets the stage in his introduction with revealing behind-the-scenes insight complemented by rare original art and ephemera. TPB, PC, $27.99 224 pages 8.5” x 11”
Lee: Ok, I am not getting this because I have the hc version that was released first. And… it’s is as bizarre as bizarre can be. As an adult, I read the book and just wondered what drugs Messmer was on when he wrote the stories. Then my kids got ahold if it and I haven’t seen it since. My youngest especially loves it and it all makes sense to her. A great book if you have younger readers. Actually, it’s better than that for younger readers.
Thomm: I never got into Felix the Cat. My kids are 10 and 12 now and not too interested in surreal comics. I’ll pass. 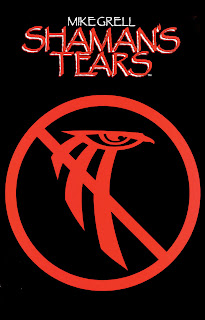 Shaman’s Tears
Mike Grell (w / a / c)
Mike Grell's 12-issue opus Shaman’s Tears is collected in its entirety for the first time. Revisit the tale of Joshua Brand and his mystical ability to harness the power of animals and the Earth itself. TPB FC $29.99 376 pages 6.625” x 10.187”
Lee: Hummm, what to say about this? This was part of Image’s line when it was still new and edgy. Does it make it any good? I don’t really remember. But I do know it’s got a strong green message and lots of animal rights stuff in it. I’m not sure I am sold on it, but it should appeal to a lot of people.
Thomm: It being Grell I’m willing to give it a shot. I’ve not known him to be overly preachy, but he can be pointed. Worth a look.


Lee: Another good month from IDW and apparently several not so subtle requests for books after I am done reading them.
Thomm: Holding true on variety this month. Quite a few worthwhile things to read here.
Posted by Lee at Wednesday, September 21, 2011