Jim: Well as I type this I have read the first issues of 25% of the new DCU and it is just a weird experience at this point. Since DC has made that dramatic shift I have decide to revert the format back to the older style of pick and then comment. I’m still looking for a new way to do this.
Gwen: I've only read JL of the new stuff so far but more should be in my mailbox later today! 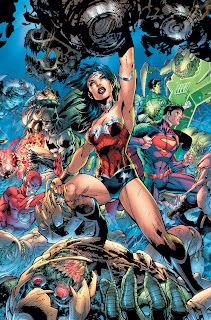 JUSTICE LEAGUE #3
Written by GEOFF JOHNS
Art and cover by JIM LEE and SCOTT WILLIAMS
1:25 Variant cover by GREG CAPULLO
1:200 B&W Variant cover by JIM LEE
On sale NOVEMBER 16 • 40 pg, FC, $3.99 US • RATED T
The superstar team of writer Geoff Johns and artist Jim Lee continue to make history as they unleash the amazing Amazon, Wonder Woman, who joins the battle against a bizarre threat! And the not-yet World’s Greatest Heroes need all the help they can get!
Jim: So DC has very little new this month since they just re-launched 52 titles 2 months ago, this leaves us with picking the third issues of some books. Also Gwen hasn’t had a chance to read any of the number ones yet (except JL), so this maybe a little odd. JL started off okay, but it seems like each issue is adding a new player and the sixth issue will be the big fight that makes the heroes decide to get together as a group. It is a very paint by numbers approach.
Gwen: I was unimpressed with the first issue of this book. Honestly, my favorite version of what I think of as the "core" JL (Supes, Batman, WW, GL, Flash, Martian Manhunter ect) is the animated version. It had a similar opening but was more fun. 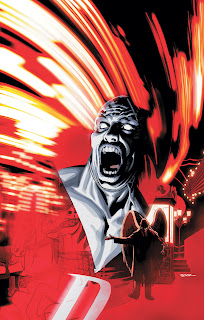 DC UNIVERSE PRESENTS #3
Written by PAUL JENKINS
Art by BERNARD CHANG
Cover by RYAN SOOK
On sale NOVEMBER 16 • 32 pg, FC, $2.99 US • RATED T
Ever since he died and became Deadman, Boston Brand has served the deity known as Rama Kushna, inhabiting bodies to complete missions that she dictates. Now, for the first time, Deadman may have a clue how he can gain some control over his “life.” But the cost may be the souls of the bodies he inhabits!
Jim: I applaud DC’s efforts in producing a book that will have a rotating central character as the star and I assume a rotating creative team, but the idea has never worked in years. So why do it at all? This format forces them to produce stories to fill a publishing edict. I’d rather just get a mini-series about a character when someone has a good idea for a character.
Gwen: They could treat it as a string of miniseries and as long as they kept on top of the creator teams it could work. 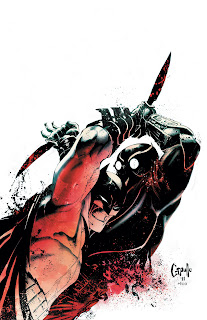 BATMAN #3
Written by SCOTT SNYDER
Art by GREG CAPULLO and JONATHAN GLAPION
Cover by GREG CAPULLO
1:25 Variant cover by IVAN REIS and JOE PRADO
1:200 B&W Variant cover by FRANCIS MANAPUL
On sale NOVEMBER 16 • 32 pg, FC, $2.99 US • RATED T.
As Bruce digs deeper into the mystery of the recent owl murders, he soon finds himself face to face with a shocking enemy – an enemy the Wayne family has secretly been at war with for centuries. Be there for the first shots of the war for the soul of Gotham City. Friends will become deadly enemies and secrets will be revealed – revelations that will change the Bat-family forever.
Jim: I can only hope this is as good as Scott’s work on Detective. Of all the DC books this is the one I’m looking forward to the most. It is one of my favorite writers on one of my favorite characters.
Gwen: I just love solicitations that promise ground breaking change. Because the more hyped up something is in the comic book world the less likely I am to believe it. That said, Scott has done great work with Batman in the past so I'm sure this will be a solid book. 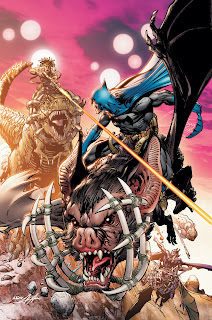 BATMAN: ODYSSEY VOL. 2 #2
Written by NEAL ADAMS
Art and cover by NEAL ADAMS
1:10 B&W Variant cover by NEAL ADAMS
On sale NOVEMBER 30 • 40 pg, 2 of 7, FC, • $3.99 US RATED T
Batman’s odyssey has brought him to the underworld, where The League of Assassins has been firmly established for decades! The League is liquidating its enemies to make way for the Sensei to take over his father’s kingdom, and after that, the world itself. But if Batman can’t conquer his inner demons and learn to save lives by taking them, he may forfeit the war to the League!
Jim: I have read that Neal is upset with DC’s promotion of this book, but to be fair it has read like an insane version of Batman. I get the impression that the book will pull together and explain itself at some point, but the only way to make this book work would have been to release it as a complete graphic novel.
Gwen: It's too bad more books aren't just released straight to graphic novel format. I'd probably enjoy Grant Morrison's work more that way. 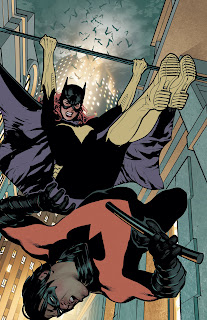 BATGIRL #3
Written by GAIL SIMONE
Art by ARDIAN SYAF and VICENTE CIFUENTES
Cover by ADAM HUGHES
On sale NOVEMBER 9 • 32 pg, FC, $2.99 US • RATED T
It’s the story you’ve been waiting for! As Barbara Gordon struggles to find her place in the world, Batgirl and Nightwing collide with the unstoppable force of a train wreck! Will it be sparks flying, or fists for this star-crossed duo? Also, the terrifying Mirror ups the ante in his bizarre war on the citizens of Gotham City! Featuring the eye-popping art of rising superstar Ardian Syaf!
Jim: I would have been excited about this is I knew whether there is any history between the two anymore. This is one of the reasons the new DCU does not excite me. If DC is just going to tease this relationship again we have already done that, either make it real or just don’t even go there.
Gwen: I agree with Jim. I always loved Babs and Dick's relationship so either go the whole nine yards with it or don't waste my time. 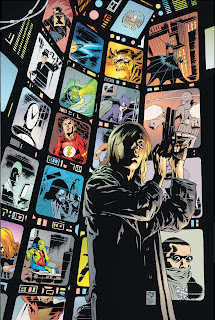 CHASE TP
Written by D. CURTIS JOHNSON and J.H. WILLIAMS III
Art by J.H. WILLIAMS III, MICK GRAY, CHARLIE ADLARD, YANICK PAQUETTE, BOB HALL, ERIC CANETE, EDUARDO BARRETO, RICK BURCHETT, GREG SCOTT and others
Cover by J.H. WILLIAMS III
On sale DECEMBER 21 • 352 pg, FC, • $29.99 US
Collecting a cult favorite series from the 1990s spotlighting the amazing artwork of J.H. Williams III, CHASE stars Agent Cameron Chase. On field assignment for the Department of Extranormal Operations, a government agency with jurisdiction over superhuman activity, she’s about to encounter some unexpected surprises, as her own mysterious powers come into play – powers she doesn’t fully understand.
This spectacular collection includes appearances by Batman, Green Lantern, The Flash, Martian Manhunter, Teen Titans, the Justice Society of America and more, in stories from CHASE #1-9 and #1,000,000, BATMAN #550, #1-9, DC UNIVERSE SECRET FILES #1, SECRET FILES GUIDE TO THE DC UNIVERSE 2000 #31, SUPERMAN: OUR WORLDS AT WAR SECRET FILES #1, JSA SECRET FILES #2, THE FLASH SECRET FILES #3, THE JOKER: LAST LAUGH SECRET FILES #1, BATGIRL SECRET FILES #1 and HAWKMAN SECRET FILES #1.
Jim: Just so Part 2 is not all trades and hardcover I added this to part 1. I enjoyed this character and was glad to see her appearance be collected in one book. Maybe she can get a new series in the new DCU.
Gwen: Wow, I haven't thought about this character for awhile. She was a pretty cool character and hopefully with bringing out a trade they'll consider bringing her back to the spotlight in the new DC.
Part 2 Later this week.
Posted by Jim at Wednesday, September 14, 2011