Back to school makes this household busy, busy, busy and my paying job has been extra intense lately too. So, I've had zilch time to prepare anything and the one book I thought I could write about...someone else got to it first (Greg did a magnificent job, didn't he?). So, we're going with an old standby, the understudy, if you will: The dreaded (or long anticipated) BUFFER POST! Even as I update the preamble, I'm still hoping I can pull something else together...if I don't pass out from exhaustion first. It's been in the queue for several months now (I wonder what the Vegas odds were on me ever using it...). I hope it still reads well. Spider-Island hasn't driven me off Amazing Spider-Man... yet. Although, having everyone mutate into bizarre spider-creatures is starting to go over the line. I never liked it when Spidey "Hulked" out either. Enjoy, I hope...

Maybe you’ve experienced this phenomenon before, but for lack of a better term I’m going to call it the “Third Season Effect” or TSE. I first encountered it after watching the third season of Star Trek: The Next Generation. You see, I thought ST:TNG was fairly mediocre during its first two seasons, with their footed pajamas (still not as bad as The Motion Picture uniforms), their “peaceful” mission, and the underdeveloped characters. However, everything started to click in the third season: better uniforms, more characterization, the BORG, “Yesterday’s Enterprise”, etc. It was fantastic and continued its run of excellence until the end of the series. Where the TSE comes in is when I re-watched those first two seasons after falling in love with the show in the third season. A lot of my complaints about the show evaporated and I really enjoyed those episodes too. Seeing those characters fully developed in the present allowed me to project that development back in the past. The same thing happened to me with Star Trek: Deep Space Nine after its third season. Of course, it went on to be the best Star Trek TV show of all time!

Recalling the wonders of the TSE led me to formulate a hypothesis: Now that I’m enjoying the Amazing Spider-Man again (since BIG TIME) after having been on the ASM BAN-wagon for years, could I now enjoy the final stories of Brand New Day? After all, Greg’s been touting how good some of those stories were for awhile now (search this blog for his reviews) and technically most of the BND parameters are still in place (no marriage to MJ, Jonah as mayor, Carlie, Aunt May married, etc.). The major difference is Peter now has a science job and we’ve got some new supporting cast. Well, let me give you the executive summary right up front: The third season effect FAILED and I did NOT enjoy the BND issues I read. I may not have even finished reading them except for the hope I could get a post out of the effort. Let’s look at the supporting data:

Funding Source: The Howard County Public Library (meaning I had no financial stake to bias my opinion)

Issues Studied: ASM #630 to 647, omitting O.M.I.T. issues #638-641. Issue #641 was unavailable, I don’t think Greg liked that arc either, and trying to enjoy seeing why Peter wasn’t married to MJ would have been an impossible task. 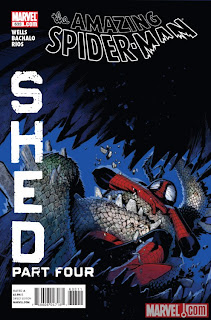 Abbreviated Synopsis: The Lizard activates the “lizard-brain” in humans making a bunch of people lose all of their inhibitions, gains the ability to speak better, and he also kills Connors’ son, Billy.

Impression: Okay, I have problems with many aspects of evolutionary theory and with my Biblical worldview, I don’t believe humans evolved from anything else. So, the concept that there is this primal lizard-brain that can even be tapped into is ridiculous to me. Also, seeing people succumb to the Lizard’s new power, basically having orgies in the street was unsettling. I don’t care if the man wasn’t in control of his actions, the girl was still being raped – the aftereffects (possible pregnancy, injury, the emotional toil, or even the awkwardness of having “mated” with your co-worker) are never explored. Maybe you’re supposed to view it as a wild party, but I can’t see it that way. 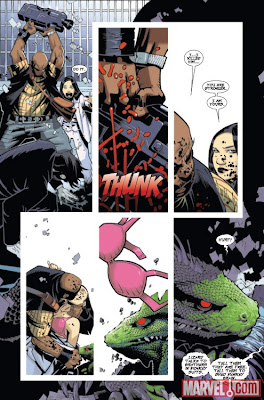 I also didn’t like that Peter and the Black Cat were just “having fun” on the side. Again, sex is viewed only as a pleasurable activity, not the intimate emotional bond it really should be between two people. Even Connors’ assistant has a “relationship” with their boss with not even any emotional build-up (just dinner – perhaps he promised her a promotion). Maybe you’re supposed to feel better that the guy got laid before he was eaten up by the Lizard. Sorry, to be so blunt, but boy was this all a little too much for me.

I really was unhappy that after all these decades, Billy finally is murdered by his own father! Oh, and Peter’s burgeoning relationship with Carlie is so lifeless. I don’t see any chemistry at all there. 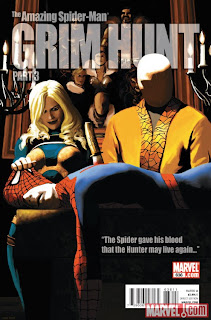 Abbreviated Synopsis: The Kravinoff family is killing off a lot of the other Spider characters, thinning the herd. Kravin the Hunter is resurrected. Madame Web dies and Julia Carpenter becomes the new seer, giving her costume to Arana, who then becomes Spider-Girl. Kaine is back and sacrifices his life (for now) to save Peter. Spider-man goes berserk, nearly killing Kravin. There is a four-part untold Kaine tale backup and the Marcos Martin/Stan Lee two-pager, which I’ll read when the collected comic comes out in a few months.

Impression: They certainly picked the right word to describe this arc! “Grim”, indeed -- What a bloody, violent mess. If “Shed” had too much sex, this one had too much gore (I guess Shed was pretty violent too) . They didn’t even have Mattie’s sacrifice be off panel. Nothing like seeing a girl butchered to give you the warm fuzzies. Talk about a dysfunctional family, the Kravinoffs are seriously messed up, especially the wife. I didn’t like seeing Madame Web betray her “friends” either. Having an out-of-control Peter seemed out of character to me. How many times has he been pushed over the edge or almost to the brink? To think this was the culmination of extensive storyline. 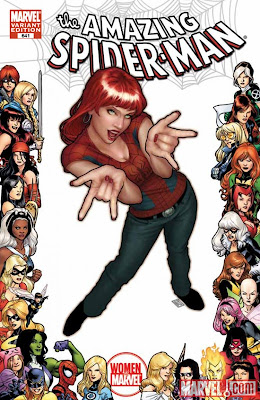 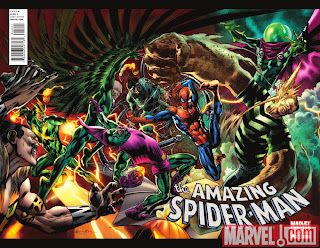 Impression: By this point, I already knew the TSE wasn’t going to work, so what hope did the creators have to entertain me? None. I’m having a hard enough time seeing a lady with goat horns give birth and none of the supporting characters seem affected by it all. The idea that Spider-Man can hold on to the baby for so long was ludicrous. I think it was intended to be a bit of a madcap farce, but I thought it was silly (not in a good way). 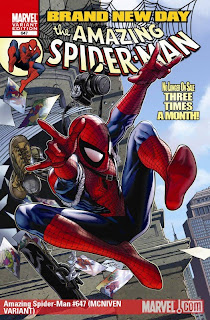 Abbreviated Synopsis: Loose ends and plot threads are tied up. Carlie becomes Peter’s girlfriend and they kiss. Harry shows he has a Smallville Lex Luthor mean streak. Jonah is a victim of his own law. Norah decides to stay in NYC. Spidey and Flash talk about Flash’s heroism. We learn the story of the strange stalker girl, Mia, who kissed Peter at the beginning of BND.

Impression: I actually enjoyed some of the stories in this issue. The Jonah tale where only unionized city employees can handle clean-up, preventing Spider-man from clearing traffic was great with some classic Spidey/Jonah sparring. The Flash tale was also good too. Spidey blames himself (doesn’t he always) for Flash losing his legs, because he inspired Flash to be a hero. Flash tells him he’d be dead otherwise. The story where Peter kisses Carlie had some moments (it’s always nice to see the Spider-Mobile), but the build-up between him and her was flat. I just don’t see them as that much of friends (I now know what Shawn was talking about) – no wonder MJ is still his best friend. There’s just not that much to their relationship. The Norah story was okay until she said “You’ll never get near my junk if you don’t grab life by it’s junk.” Please, are people really that crude? Maybe, I’m just too old. Didn’t care for the Mia story, but I did think Wacker’s “Choose Life” shirt was interesting. Way to go, Steve!

I didn’t necessarily hate every aspect of these books and really I’m not trying to be too negative toward the creators involved. The art and pacing may have been fine, but the stories themselves just didn’t resonate for me. I honestly expected the TSE to work and hoped I would totally “get into” the arcs. I guess BIG TIME was more then just about Peter getting a job. There’s a major difference in the approach to the whole series now. Sure it’s a new direction, but it’s like Peter is no longer the post One More Day devolved early twenty-something, direction-less loser now. He’s Peter Parker again and that is what has been missing during Brand New Day. So, I didn’t really miss anything by being away for awhile.
Posted by Matthew at Saturday, September 17, 2011

Email ThisBlogThis!Share to TwitterShare to FacebookShare to Pinterest
Labels: Marvel