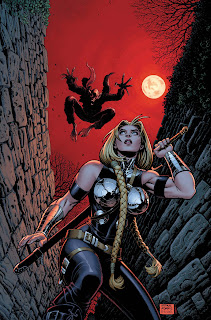 FEAR ITSELF #7.1 CAPTAIN AMERICA
Written by Ed Brubaker Pencils / Cover by Butch Guice
The Marvel Universe holds a wake for Bucky Barnes Fear Itself forever altered the life of Captain America, see how! 32 PGS./One-Shot/ $3.99
FEAR ITSELF #7.2 IRON MAN
Written by Matt Fraction
Art / Cover by Salvador Larroca
Tony Stark squares off against Odin! And before it’s all over, Tony’s darkest secret is leaked to the world! Fear In A Bottle? 32 PGS./One-Shot/ $3.99
FEAR ITSELF #7.3 THOR
Written by Matt Fraction
Pencils / Cover by Adam Kubert
Variant Cover by Salvador Larroca
Odin decides the final fate of Asgard…and it will never be the same. The heroes of the Nine Worlds bid farewell to one of their own. Thor No More! 32 PGS./One-Shot/ $3.99
FEAR ITSELF: THE FEARLESS #2 / #3 (OF 12)
Written by Cullen Bunn, Matt Fraction / Christopher Yost
Penciled by Mark Bagley / Paul Pelletier
Cover by Arthur Adams
Sin, Crossbones, and Valkeryie race across the globe in search the missing hammers!
The Secret Avengers guest-star in a battle against Raizo and an army of zombies! 32 PGS. (each)/ $2.99 (each)
Greg: Good god that’s a lot of aftermath. I like all the creative teams involved, but yeesh. Stand out here seems to be Cullen Bunn. He’s been great on the Sixth Gun though. I’m interested to see his take on mainstream superhero stuff.
Lee: People have certainly loved Fear Itself so it makes sense for Marvel to keep the story going.  I agree, Bunn is one to watch. 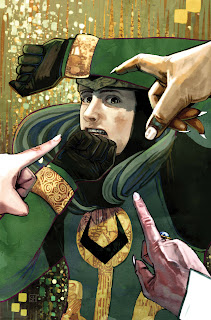 JOURNEY INTO MYSTERY #631
Written by Kieron Gillen
Art by Whilce Portacio
Cover by Stephanie Hans
Marvel Comics 50th Anniversary
Variant by Amanda Conners
Loki on trial for high crimes against the nine realms! Will the consequences of his grand scheme to save Asgard from Fear Itself finally destroy him? 32 PGS./ $2.99
Greg: One of the more underrated superhero books out there. You know how it’s hard to write someone who’s supposed to be a genius. Same applies to Loki. Gillen is one of the few writers who manages to make Loki as clever and duplicitous as he is supposed to be. And rebooting the character as a kid has allowed him to give him more depth than I’ve ever seen.
Lee: You've been raving about this for a couple of months now.  I think you have finally sold me on it. 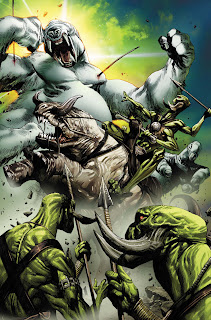 JOHN CARTER: WORLDS OF MARS #2 (OF 5)
Written by Peter David  Art by Luke Ross
Cover by Mico Suayan
The thrilling prequel to the Disney adaptation of John Carter World of Mars continues!  Sab Than, would-be ruler of Zodanga, has kidnapped the magnificent Dejah Thoris, the Princess of Mars, in order to bring her home city of Helium to its knees. Unfortunately for him, he's about to learn that capturing a Martian princess and holding onto her is not exactly the same thing. Meanwhile, Tars Tarkas promises to help an old friend on a dangerous quest, only to discover himself face to face with a Martian white ape and his "old friend" nowhere to be found! It's part two of the official prelude to the highly awaited Disney film, based on the classic Edgar Rice Burroughs tales of Barsoom, the original Martian chronicles. 32 PGS./ $3.99
JOHN CARTER: A PRINCESS OF MARS #3 (of 5)
Adaptation by Roger Langridge  Art by Filipe Andrade
Cover by Skottie Young
Imprisoned by the brutish Tharks of Mars, John Carter must fight his way to freedom - not just for his own sake, but for that of Dejah Thoris, the princess he loves! But first he must prove himself in the arena - in a fight to the death! All this plus the sad secret of Sola, as Marvel's brand-new adaptation of Edgar Rice Burroughs' classic tale continues! 32 PGS./ $2.99
Greg: Hey, doesn’t Disney have a John Carter movie coming out or something?
Lee: A movie?  Who knew?  Gotta say, the Burroughs family looks like a bunch of money sluts since there are a series or two over at Dynamite and this running at the same time.

ULTIMATE COMICS SPIDER-MAN #4
Written by Brian Michael Bendis
Penciled by Sara Pichelli
Cover by Kaare Andrews
Miles Morales IS the new Spider-Man! What’s the secret behind his powers, and how will he master them? What new and familiar enemies will rise to challenge this all-new Spider-Man? The most-talked about story of the year keeps delivering the shocking surprises! 32 PGS./ $3.99
Greg: First issue was a blast. Feels like a different character who still hews close to what makes Spider-Man tick. Hoping these follow up issues maintain that level of quality.
Lee: I've read good things about this so I'm ready to try again.  I stopped USM a couple of years ago but this looks like to much fun to miss. 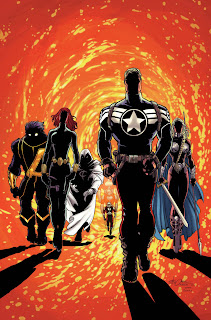 SECRET AVENGERS #19
Written by Warren Ellis
Pencils by Michael Lark
Cover by John Cassaday
Marvel Comics 50th Anniversary Variant by Larry Stroman
Run The Mission. Don't Get Seen. Save The World. In the decadent and crumbling city of Aniana, in the Eastern European country of Symkaria, a local drug lord is planning to sell something mysterious to the Shadow Council. The Secret Avengers cannot risk that, or an interception after the fact -- they must get to the drug lord before the handover, and take whatever the goods are. Their covert mission uncovers something utterly unexpected, ancient and terrible and a threat to the entire world... 32 PGS./ $2.99
Greg: This is a really interesting line up for a spy team book and for all his strengths, Brubaker never seemed terribly interested in doing much with a lot of these characters. Ellis, on the other hand, really seems to be exploiting the book’s potential. This run is going to be a great trade for Marvel to hand to anyone that can show what this title’s about.
Lee: I loved Ellis's take on Thunderbolts and I am sure this will be good too.  But I am waiting for the fancy hc!

AVENGING SPIDER-MAN #1
Written by Zeb Wells
Pencils / Cover by Joe Madureira
Variant Cover by Joe Quesada, Humberto Ramos, J. Scott Campbell
Blank Variant Cover also available
This is what you’ve been waiting for! The return of legendary artist Joe Madureira (X-Men, Battle Chasers) and fan-favorite Spidey writer Zeb Wells in a brand new, highly anticipated, monthly Spider-series that teams the wall-crawler up with some of the greatest heroes in the Marvel Universe. In our first issue, Spider-Man and Red Hulk take on a Moloid army during the New York Marathon! Stay safe until November because you’ll want to be here! 32 PGS./ $3.99
Greg: Let’s get past the horrible title. This is basically Marvel Team Up by Zeb Wells and drawn by Joe Madureira. It appeals both to the discriminating comics fan in me (Wells is a tremendously underrated talent) and the 90’s fan boy (JOE MAD! ZOMG!). Definitely worth a look.
Lee:  Why doesn't Wells get better titles?  He is a fantastic writer.  Then again, this is pretty high profile.  Oh well, basically a guaranteed winner.

More happiness and sunshine and butterflies from Greg tomorrow...
Posted by Lee at Thursday, September 22, 2011