Continued from yesterday... more sunshine and butterflies from Greg! Written by David Liss
Penciled by Shawn Martinbrough
Cover by Francesco Francavilla
The Panther Vs. The Kingpin…The Battle Begins! With Daredevil out of Hell’s Kitchen, The Hand’s new leader makes his move for ultimate power. But why is Wilson Fisk targeting Wakandan citizens…and can T’Challa save the one woman who holds the key to unlocking the Kingpin’s plans from the deadly aim of Lady Bullseye and Typhoid Mary? Ever since T’Challa agreed to take over for DD, you knew this war was coming…here it is! 32 PGS./ $2.99
Greg: That is an AWESOME tagline. I hope it stays on all subsequent Black Panther books.
Lee: Really?  The tag line impressed you?  You are way easier to please than me. 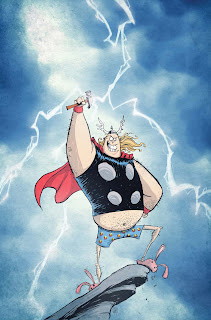 SHAME ITSELF #1
Written by Wyatt Cenac, Michael Kupperman, Elliott Kalan,Victor Varnado / More
Penciled by Colleen Coover, Dean Haspiel, Clayton Henry / More
Cover by Skottie Young
Get Ready For The Most Earth Shattering, World Destroying, Insurance-Rate Hiking, Event In Marvel History Since The Last One! Wyatt Cenac and Elliott Kalan of “The Daily Show” lead a cavalcade of comedy’s finest minds to answer the questions about the Marvel Universe you were ashamed to ask! This Fall, the Marvel U will be rocked down to its spandex wearing core! Be ashamed. Be VERY ashamed! 40 PGS./One-Shot/ $3.99
Greg: Daily Show writers and Tales Designed to Thrizzle’s Michael Kupperman making fun of event comics? Yes please.
Lee: I am so there with you on this one.  And great art by Coover and Happiel to boot.  This is an easy win. 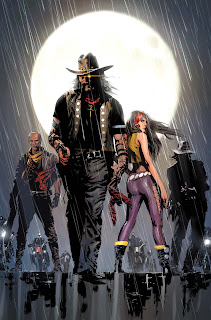 SIX GUNS #1 / #2
Written by Andy Diggle
Art by Davide Gianfelice
Covers by Butch Guice
"Don't set them up if you can't take them down!" Times may have changed since the days of the Old West, but in the war-torn South American state of San Diablo, the law of the gun still holds sway. When former hero-for-hire Maria Vasquez, alias Tarantula, finds herself wanted for murder south of the border, Texas Rangers Division lawman "Tex" Dawson is assigned to bring her in. But they're on a collision course with the outlaw Black Riders biker gang, who plan to make sure she never makes it to trial alive… Classic Marvel gunslingers Tarantula, Tex Dawson, Black Rider, Matt Slade and the Two-Gun Kid are given a modern-day makeover in this hard-bitten tale of blood and bullets by the Daredevil: Reborn team of Andy Diggle and Davide Gianfelice. Five heroes, six guns…against six hundred! 32 PGS. (each)/ $2.99 (each)
Greg: As much as I like to slag off the DC reboot, they are doing a good job putting out titles that, while still superhero titles, touch on other genres. This looks to be much in the same vein. Diggle’s hit or miss, but can be very good and I appreciate what Marvel’s trying to do here, so I’m gonna check this out.
Lee: I agree that it's good Marvel is doing material other than capes but I am not convinced it will be good.  And it isn't because of Diggle, because I think he's great, and not because of the art either.  But, somehow I can't see Marvel giving the creators enough Freedom to actually produce something unique. 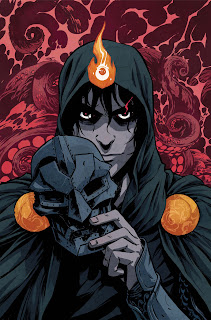 VICTOR VON DOOM #1
Written by Nick Spencer
Art / Cover by Becky Cloonan
The teenaged Victor Von Doom defends his life…in Hell. The undergrad who’ll grow to become Dr. Doom is an abrasive young genius surrounded by collegiate buffoons, wastrels, and dilettantes – like that insufferable Richards. But Doom knows he’s destined for greater things, and from his dorm he journeys fearlessly to Hell to save the spirit of his mom…and his struggle to get there, the trials he faces, and his subsequent failure will make him the man he’s to become. Nick Spencer and Becky Cloonan pull back the cloak to reveal the youthful, angsty, exuberant side of Victor Von Doom! 32 PGS./ $2.99
Greg: Doctor Doom is on the CW! I don’t wanna wait! For my Doooom to be over. But in all seriousness that is an incredible creative team. Worth a look.
Lee: It's Hoodie Doom not to be confused with Hoodie Superboy.  I wish I was young enough to wear a hoodie.... *sigh* 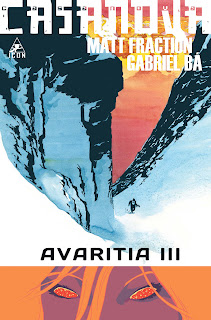 CASANOVA #3
Written by Matt Fraction
Pencils / Cover by Gabriel Bá
On the run from ten thousand parallel worlds that want him dead, Casanova Quinn fights for his life inside his dying father's E.M.P.I.R.E. He's figured out the biggest secret in the world and now he and his girlfriend from beyond tomorrow, Sasa Lisi, embark on a ferocious triple-cross that means they'll either win it all or spend forever in hell. Or heck. Or somewhere awful, trust me. 32 FULL-COLOR PAGES that have come from the future to MESS YOU UP. 40 PGS./ $2.99
Greg: The world is a better place when this is coming out. The first issue of this hadn’t missed a step after a long lay off and I need more! Why you gotta make me wait Marvel?
Lee: You're just picking the books I picked last month now... find something new to praise ya slacker. 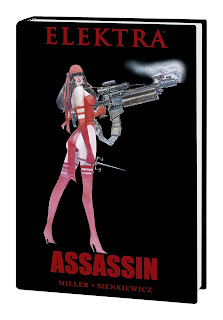 ELEKTRA: ASSASSIN PREMIERE HC
Written by Frank Miller
Penciled / Covers by Bill Sienkiewicz
Good ninjas never die, let alone the baddest one of all! Fan favorite Frank Miller ushers his awesome assassin through good and evil and life and death and rebirth and more! Who is the otherworldly entity in pursuit of the presidency? When has Elektra met her greatest triumphs and tragedies? Why did she die, and how did she return? Collecting Elektra: Assassin #1-8. 272 PGS./ $24.99
Greg: One of the seminal works of the 80’s and I’ve actually never read it. I’ve heard its completely bonkers in the best way possible. Worth a look, Lee?
Lee: Absolutely worth a look.  This was Miller when he was still writing great stuff.  It's Sienkiewicz at his most experimental.  I haven't read my copy in a couple of years but now I want too. 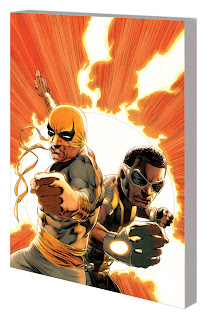 POWER MAN AND IRON FIST: THE COMEDY OF DEATH TPB
Written by Fred Van Lente
Penciled by Wellinton Alves / Pere Perez
Cover by Mike Perkins
Charging from the pages of Shadowland comes the all-new Power Man / Iron Fist! When Danny Rand transformed his multinational corporation into a non-profit foundation, he thought he had left fighting behind — but with so many innocents wrongly convicted, the battle never ends! Their first case is Luke Cage and Danny Rand’s former secretary, Jennie Royce, imprisoned for a murder she didn’t commit — or did she? And Iron Fist isn’t fighting alone. He’s got a new partner: Victor Alvarez, the all-new Power Man, he of the exploding punches — and exploding temper! Can Danny train his young charge well enough to face returning foil El Aguila — as well as new threats Don Pagliacci; the Commedia Dell’Morte; and the beautiful, deadly Noir? That’s right, Marvel’s original mismatched action duo begins a new era of greatness right here! Collecting Power Man / Iron Fist (2011) #1-5. 120 PGS./ $16.99
Greg: This was a great mini series and you all need to buy it so Marvel makes more and if you don’t I’m going to cry.
Lee: Oooohhhh I was going to buy it but with I can't pass up the chance to see you cry.  We can organize a little party at the store on the Wednesday this arrives and watch you cry when no one buys it.  I really can't wait.

Greg: Well Lee, I started out complaining about crossovers, but the rest was pretty positive for me. Are you going through downer withdrawls?
Lee: Actually, no.  I found it more interesting that you picked all the stuff that I wouldn't have... except for Hoodie Doom.  I was soooo ready to make fun of that.
Posted by Lee at Friday, September 23, 2011