The Week in Review – September 14


The new DCU will continue to dominate this month and specifically this column. That is not to say that the other companies are not out there producing some great books. Heck we had Uncanny X-Force from Marvel, Pigs from Image was a good start, a great end to Green Hornet Year One from Dynamite. Heck Severed #2 was probably the best book of the week so I wrote a solo review over at WCS, click away for that review. It is just in discussing the week that DC has reenergized their own line up of books and per my favorite retail store stirred up interest in comics in general with returning lapsed fans as well as some new faces. As a long time fan I’m always happy to hear that type of news. I can’t wait to see the September sales numbers, I have a feeling DC won the month like they haven’t since the sixties. 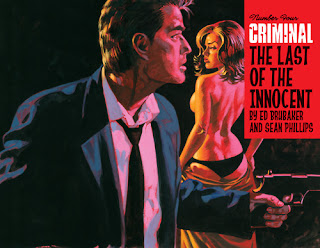 After all of them as an introduction I will start with a book not from DC of course, Criminal Last of the Innocent #4 (of 4). Severed and this book vied for best book of the week and I could argue for either book. Ed Brubaker and Sean Philips great series produced their best story ever. First off, who do I have to kill to own that cover? What a great cover, that just oozes sex, danger and noir. Second these guys are producing great stories and still manage to up their game on their latest installment of Criminal, hats off gentlemen. “Last of the Innocent” wraps up by concluding the story of our “Archie” comic characters. Archie manages to get away with killing Veronica and running off with Betty and the money. Reggie gets killed off in jail and Jughead dies of an overdose set up by Archie. I use the Archie character names because I can never remember who he renamed who except Jughead is Freakout. It is well written and drawn to perfection. These guys are like McCartney and Lennon, Swiss and Cheese and Old Bay and Crabs, a winning combination. If you like your comics hard edged, well written and great art, this is your stop.
Part of the joy of the new DCU for me this week is I was not “weirded out” by the all the books. I was prepared for nothing to be the same and yet some of the books obviously were not changed at all. 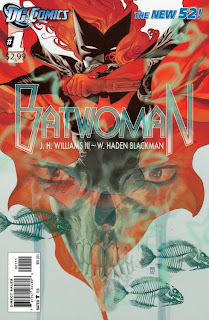 Batwoman #1 was simply held back from being launched earlier and appears to have not had a single word changed because of the reset. JH Williams art is stunning as always and the story by Williams and Haden Blackman was a great follow up from the last story we had about Batwoman. This issue Kathy is tracking down La Lloroan, the weeping woman who is apparently an urban myth who steals children. Mixed in with this is the continuation of subplots that Greg Rucka had started. I love that Williams is following through and building on what has gone before. The only true nod to the new DCU was seeing a red headed Jim Gordon as opposed to a fully gray haired commissioner. I’m still not sure why Kathy Kane has to be colored such a pale white as she looks like an albino or something, but you certainly can’t mistake her for anyone else. 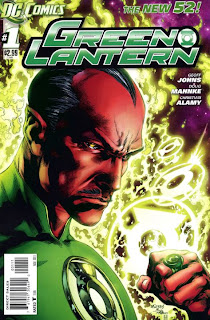 Green Lantern #1 could have almost been numbered exactly after the last issue as we did not miss a beat. It had great artwork from Doug Mahnke and a very good story about Sinestro and the Guardians trying to figure out why the ring chooses him again. Sinestro is trying to figure it out and is dealing with his own corps as Hal is trying to deal with having not had a real life for a long time. I was shocked to see Carol Ferris back on Earth and more shocked to see that she was apparently looking for a relationship with Hal. It felt too much like the sixties, but at least we got a glimpse of Hal being a civilian again. I also was not thrilled with Sinestro showing back up on Hal’s doorstep with a plan to get Hal the ring back as I want this story to play out a little longer. I guess sometimes I don’t mind a story being stretched, but DC is giving us more story per issue in general then I have seen in years. 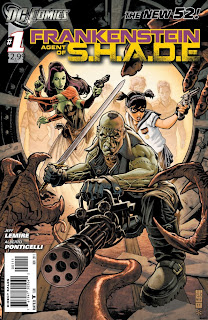 Of course not all of the DCU was just follow up, we had Mister Terrific, Demon Knights and other, but Frankenstein Agents of Shade #1 was a fun one to me. Jeff Lemire crafted a strange tale of super secret agents and monsters, sort of a BPRD on super hero steroids, with floating miniaturized cities, Ray Palmer as the chief scientist, the head of the organization an old soul in a young body, Frankenstein and more. I was a little disappointed in Alberto Ponticello’s art as it felt a little rushed, but since his discovery by US comics he is in heavy demand. A book that I thought was a fast paced and action packed fun book, but one that maybe hard pressed to generate a huge fan base. 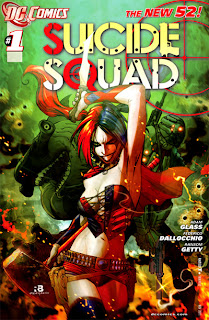 To keep it brief, Batman and Robin #1 off to a good start as Tomasi is showing that the Damien / Bruce relationship will be a strained one. The Suicide Squad #1 is a radical departure and has reset many of these characters including making Harley into an edgy an deadly version of her old self and finally Superboy #1 is a hard reset, yet keeping his origin pretty much the same. At the same time it read very well and a book I’m looking forward to seeing more of, which is a shock of Lobdell is not a writer I really was looking to deliver much of anything.
I wish I had more time as I would like to get into more detail on all the new DCU books, but with Demon Knights to Legion Lost to Grifter the new DCU is certainly a different place with no set standard on genre, but all have been full to the brim with story.
That wraps up a huge week of comics and while next week’s list is still big, it is like 10 books less than last week. Coming out for me is Batman (Scott Snyder and Greg Capullo), Birds of Prey, Blue Beetle, Captain Atom, Catwoman, DCU Presents Deadman, DMZ, Fables, Green Lantern Corps, Hellblazer, LOSH, Nightwing, Northlanders, Red Hood and the Outsiders, Sugar and Spike Archives (delayed from last week), Supergirl, Wonder Woman, Avengers, Captain America, Daredevil (again already?), Hulk, Thunderbolts, Ultimate Hawkeye, X-Men Schism, BPRD Hell on Earth Russia, Dave Stevens Sketchbook, Near Death, Witch Doctor, Red Wing, Cobra and Vamperilla and the Scarlet Legion.
Turn in again next week, same time, same place.
Posted by Jim at Monday, September 19, 2011