Thomm: What, no theme?
Lee:  Sometimes I forget.  What can I say? 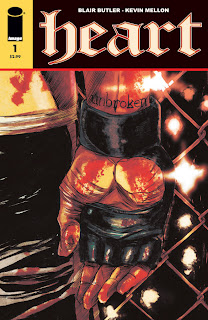 HEART #1 (of 4)
story Blair Butler art & cover Kevin Mellon
32 Pages / BW
Mixed Martial Arts and comics collide when an office drone named Oren “Rooster” Redmond follows his older brother into the fiercely competitive world of professional MMA. With nothing left to lose, Oren hopes to find his purpose in fighting – but does passion equal proficiency? Does Oren truly have the heart of a champion? Find out in the first chapter of this four-issue series.
Lee: Office Drone meet Televised Fight Club. Televised Fight Club meet Office Drone. If you like MMA this could be good. It will be interesting to see if Butler can capture the drive and motivation required to actually succeed at MMA on paper.
Thomm: I am an office drone and have no interest in MMA. Maybe if they add chainsaws. 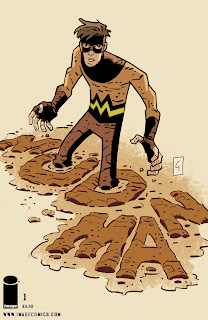 MUDMAN #1
story /art / cover Paul Grist
32 Pages / FC / $3.50
A Brand-New Superhero Comic By Paul Grist! It’s the first day back at school for Owen Craig, and it’s not going too well. He’s been run over, got detention, and his police officer father has been taken prisoner by armed bank robbers. And now his body seems to be turning into mud…
Lee: I have loved everything that Grist has published so I am getting this but I really wish he would be more consistent with Jack Staff. Oh well, I shall be happy with this.
Thomm: It’s Clayface as a hero! More Invincible than Clayface from the sound of the kid’s personal problems. A quality creator, so it’s likely to be good. 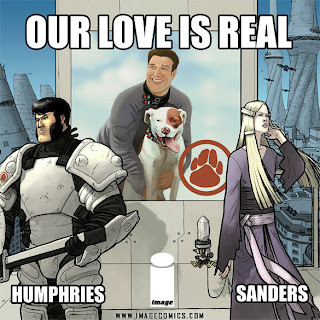 OUR LOVE IS REAL
story Sam Humphries art / cover Steven Sanders
24 PAGES / B&W / 8” X 8” / $3.99
The comic book "surprise hit of the summer" is back – and Image has it! In wide release for the very first time! See it for yourself – the book that has everyone buzzing: Our Love Is Real!
The Future Is Here! Plantsexuals riot in the streets for equal rights. Humans fall in love with dogs. And crystals are more than just jewelry. A chance encounter on the job changes a riot cop's life forever as he finds himself caught in a bizarre love triangle that blurs romance, crime, and lust beyond recognition.
Our Love Is Real is a bold new sci-fi one-shot written by Sam Humphries (one of Wizard's "Five Writers to Watch in 2011," CBGB, Fraggle Rock) and illustrated by Steven Sanders (Uncanny X-Men: The Heroic Age, Five Fists Of Science).
“A splendidly-perverse and eye-poppingly gorgeous fistful of futuristic fun.” – Jason Aaron, writer of Scalped, Wolverine, and Ghost Rider
“It’s a really fun comic book that could get quite a following.” – Rich Johnston, Bleeding Cool
Lee: Ya know… I’m not sure where to go with this. It’s out there, that’s for sure. And it looks great. I’m all for reading anything that’s sure to push all sorts of people’s buttons.
Thomm: Whenever I read something like this I think of the religious right. It plays so heavily to their fears and their arguments that allowing gays to marry or plural marriage will lead to pedophelia and bestiality being sanctioned. You know, because children and animals have the same legal ability to consent as adults. *sigh* Anyway, pretty sure none of them will read this, unless it’s to get worked into a lather for some scathing attack on the liberal media. Reason enough to read it myself. 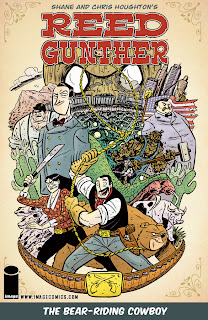 REED GUNTHER, VOL. 1 TP
story Shane Houghton art / cover Chris Houghton
184 Pages / FC / $14.99
Everyone’s favorite bear-riding cowboy gallops into his first collected edition! Reed Gunther and his trusty grizzly bear steed bumble their way through the wild west fighting giant snakes, hoards of mole creatures, a resurrected John Henry zombie, freak show freaks, special government agents, and all sorts of wild monsters created by an ancient mysterious Idol! This colored collection of excitement, friendship, and adventure is fun for folks of all-ages! Collects Reed Gunther #1-5
Lee: This is another book that just looks like a ton of fun. It might come down to this or Skullboy from DH for my fun book of the month. Then again, maybe I get both and give this to the kids.
Thomm: I’m starting to see a trend of throwing everything but the kitchen sink into stories, all in the name of fun. I’m guessing some work better than others. 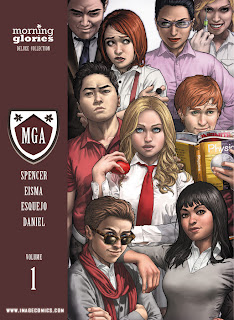 MORNING GLORIES DELUXE COLLECTION, VOL. 1 HC
story Nick Spencer art Joe Eisma cover Rodin Esquejo
336 Pages / FC / $39.99
At last, an oversized hardcover of Nick Spencer’s runaway hit series, Morning Glories. This deluxe edition features every cover, plus sketches, character studies and other extras that no collector or fan of the series will want to be without. See why critics everywhere have cited Morning Glories as THE book of the year!  Collects Morning Glores #1-12
Lee: Now this is a conundrum for me. I read this series in trades and I have really enjoyed it so upgrading to a fancy hc is very, very appealing. But, I know that issue 12 in no way concludes the series. And, I am really not convinced this series is going to end well. Maybe I am wrong but it seems to have more and more mysteries and less and less conclusion. So, for this book, I run the risk of getting a hc that may never have a companion. If you haven’t read the series, it’s worth a read but I am sticking to the trades for now.
Thomm: I seldom get HCs, so this isn’t aimed at me in the first place. I have enjoyed the one trade I have so far. 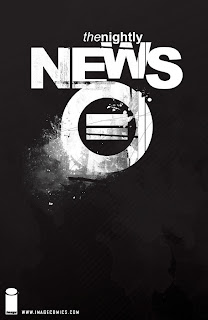 THE NIGHTLY NEWS ANNIVERSARY EDITION HC
story / art / cover Jonathan Hickman
300 Pages, $34.99
The five-year anniversary, over-sized, deluxe hardcover edition of The Nightly News. Containing the Eisner-nominated original story, as well as the never before seen original scripts and sketches, a complete making of, the original pitch, and much more. Collects The Nightly News #1-6.  "Jonathan Hickman's The Nightly News is the industry vanguard… where the rest of comics will be a decade from now." – Stuart Immonen
Lee: And, a fancy collection of the series that put Hickman on the map. No matter what you think of his current work, this series was very, very good and deserved all the praise it got. This is very tempting.
Thomm: Is there a trade? For only 6 issues, $35 seems a bit much, even in HC with a bunch of extras.

Lee: It’s all about “Our Love is Real” this month. That book looks to strange not to get.
Thomm: Image has a good chance of getting more of my money with Vertigo ending. Some tempting stuff here.
Posted by Lee at Friday, September 09, 2011