Thanks to the response generated by my last fistful of reviews I thought I should take some time to more fully explain why the Flash Point storyline bothered me so much. Or, for that matter, why Paul Levitz's take on Shadow Lass hit me the same way.

I am, at heart, a character person. As a writer myself (albeit as a hobby, not a profession) I feel that good, consistent and strong characterization is key to a good character-based story. Sure, you have writers, like many of the modernists (Faulkner and O'Conner to mention two), who use their characters as plot devices. But when you read stories like, O'Conner's A Good Man is Hard to Find) it's obvious that the characters are there to tell the story, not to stand on their own. Also that the core object of the story is to bring up certain ideas to the audience, not to involve them too closely with the characters themselves. Many writers use such techniques. The writers of series, however, should not employ this technique with any frequency. 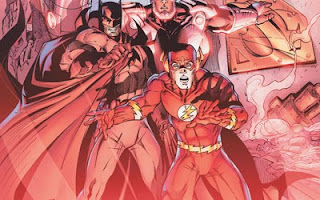 Perhaps you wonder why. Surely there are comic book writers who are utilizing certain literary techniques as a form of expression. Just look at books like Sandman. Gaimen certainly uses a wide range of literary devices, such as metaphor, to support his key story points. However, you will note that Gaimen is a character heavy writer. As much as he uses characters to tell an over-arching story, that is larger than the character itself, he remains true to those characters. You move those same characters to another setting or another plot-line and the core of who those characters are does not waver. In fact one of the key points to Gaimen's Sandman books is that people either change or die. During Sandman "The Wake" Lucian is asked why Morpheus let himself die. Lucian responds, "Charitably... I think... sometimes, perhaps, one must change or die. And, in the end, there were, perhaps, limits to how much he could let himself change." Another point is when death is with Morpheus near the end and she asked him why he didn't just leave the dreaming behind - that he could have done that rather than let the Kindly Ones destroy the Dreaming piece by piece. She says that he could have just left as their brother Destruction had. And Morpheus responds that, no, he could not. The reason being that he is not capable of such a choice as that is who he is as a person.

To bring this back to my original point, comic books have their backbone in their characters. Series books - especially cape books - are based around one or more characters - not the story itself. If a new creator comes onto the book, yes, they tell stories, but they tell stories about the character to which they've been asked to write. I mean, isn't that why Oliver Queen was brought back in the first place - the new writer Kevin Smith wanted to write about Ollie as Green Arrow, not Conner. Because Conner was a completely different character and it wouldn't have made for good story to try and make him Ollie in order to tell the GA stories the writer wanted to tell. Not that I think this was a great call as they could have just found a writer who would tell GA Conner stories, but the point stands.

So you have writers like Levitz who take a character and make them into a different character - nearly unrecognizable but for the way the artist portrays them on the page. This cause you to lose what little integrity the story surrounding said character may have had. I feel, as a writer who values strong and consistent characterization, that you either gradually change a character in a believable fashion, showing your reader the steps along the way that influence the character's decisions that account for such changes. Especially as you must remember that people do not change easily. Otherwise you make a new character to more adequately fit your story purposes. So if you have a story where the entire plot hinges on a character who would risk destroying the known world to selfishly alter time - don't use Barry Allen - a character who, over and over again, has performed selfless acts even at great cost to himself. Yes, I understand that Barry losing his mother (whether or not it was ever part of any previous character history) would have been traumatic. But the character of Barry Allen who has been written for me for years, even in his recent comeback, is not a character that would do something so potentially harmful for personal gain. And it is personal gain in the end. Yes, he was saving his mom, but he was doing it for himself with no thought to what she may want because obviously, per the conclusion of that time-line, she didn't want her life at such a cost. Another example of mangling a character was in Legion of Super Heroes. Don't use Shadow Lass to make a point about an alien hating character willing to sleep with an alien. Especially when Shadow Lass has been established as being head over heels in love with Mon'el (and exceedingly loyal to him) since practically the addition of her character to the Legion. 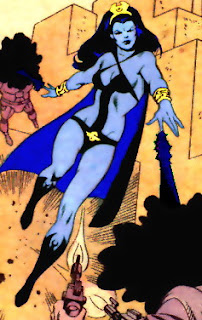 If you are writing a story about a character who is well established as a responsible writer (in regards to that character's audience if nothing else) you should work your story within the parameters of that character's established personality. Yes, make changes, but show why that character changes. People don't change overnight and for the most part something of their core being is going to remain unaltered. Isn't that why Hal made better sense to us after the Parallax entity was added to the equation - because really, no matter how traumatized Hal was, how many people really believed he'd slaughter so many of his friends and allies?

Perhaps I have a different perspective than many in regards to this as comic book characters are somewhat fluid. I am a big character person though, that's why I follow these books - is to follow the characters I've grown to love. So I don't enjoy a story nearly as much when I've been set up to think I'm reading a story about Barry Allen - and it doesn't fell like the Barry Allen I know. Perhaps DC also got the Sandman memo - they could either change there characters or let them die/move on and replace them. So they made this relaunch where at least we are told that the characters we've followed for so long aren't the same characters we knew. So when Barry Allen makes a selfish decision that could have dire consequences to the rest of the world I won't be as annoyed by the story line. Because I know that he's not the same Flash I grew up with anymore.
Posted by Gwen at Tuesday, September 20, 2011