So after reading and reviewing Arsenic Lullaby the Devil’s Decade I reached out to the creator/artist/writer Douglas Paszkiewicz to do an interview. Doug’s work is fun and has an edge to it that most comedy is missing. We have become a politically correct society that has no sense of humor; Doug is working to correct that problem.
Jim: Arsenic Lullaby is absolutely brilliant and hilarious, but touches on subjects that most people would not get near, much less make jokes about it. What possessed you to go down the road of serial government baby killers and Zombie Fetuses?
Doug: It wasn't really a conscious effort to go down dark roads.  I just wrote/write stories that I found funny.  Often the content is driven by what I think would be fun to draw for awhile. I drew the witch doctor in my sketchbook and liked the drawing so I found a way to stick him into a story. There is also the problem of keeping things original I try to find elements that haven't been beaten to death already in the form of songs, movies, comics, etc. So after 6000 years of human civilization that really only leaves darker content that other people haven't wanted to touch...like fetuses and killing babies. I may come up with a funny story about a working class dad and his wacky neighbor but what's the point? It's either been done or something similar has. So it is really a matter of what my brain latches onto filtered by what has already been strip mined by every story teller before me. 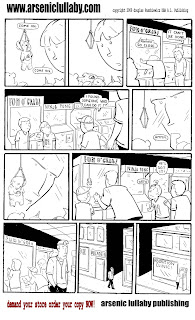 Jim: Arsenic Lullaby is very unique book. What is your background? I understand you were a comedian at one point and decided to try this venture, but did you have formal art training or an interest in comic book story telling?
Doug: I read comics as a kid of course but never set out specifically to become a comic book writer.  I just needed a better outlet for my jokes than a smoke filled bar full of drunks.
I was always a talented illustrator but I had no formal training after high school.  I just went out and studied the old masters (Kirby, Jack Cole, etc.) and analyzed what they did and why it worked.  In many ways it is nerve wracking telling a story in comic book format, 'specially a comedy story, because so much of a joke depends on the person not knowing what is going to happen...when the reader can see all the panel at once hiding the punch line is a challenge. Horror and comedy are very similar in that regard, leading the reader away from the ending is the key. 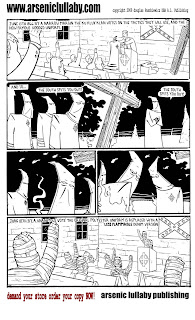 Jim: Is Arsenic Lullaby ever going to get back to a regular publishing schedule or are you done with these characters?
Doug: I would doubt it would return to a regular schedule but you may see seasonal specials or something. I still do work for Mad Magazine regularly and the Characters will live on in the short animated cartoons we are making.  We made a 30 minute animated pilot episode of Arsenic Lullaby to pitch to networks and such and are continuing to make more.  It will either get picked up by some basic cable channel or ruined or we will distribute the shorts on DVD and pay per download.  I'm having more fun with the animated version because I have SOUND!  A lot of what I do in Arsenic Lullaby is dry wit and pregnant pauses and knowing just how far to push a scene but there is only so much you can to set timing when everyone reads at a different pace and inputs visual information at a different rate. Being able to actually slow down a scene of stretch out a scream makes what I am trying to do with a given story more effective.
Jim: I love understanding each person's process, how do you go about putting together an eight page story? Or is it a thought or joke that you think is funny and then the story fits the idea? 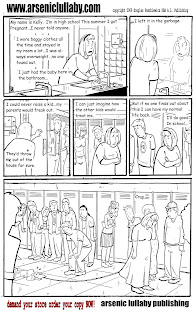 Doug: A longer story usually stems from me feeling like drawing a particular character.  Let's say I feel like drawing Baron Von donut.  I know this characters personality pretty well as well as the secondary cast so I just grab some premise (like X-mas) and have the characters interact involving that premise.  If you have good characters and a good grasp of them things will write themselves.
So the story just starts as scribbles and dialogue notes. After that I plug that into thumbnail sketches of the pages and then the heavy lifting begins.  How to set the timing, how to make the pages interesting visually, how to get the reader to notice what you want them to notice...after that it's just a matter of penciling and inking
Jim: The animated special sounds great. Are there any teaser trailers that you released? Who is featured in it?

Doug: There is a somewhat rougher version of one of the shorts on u-tube right now; a search for Baron Von Donut will bring that up.  Voodoo Joe also has a short as well as some ineffectual Satan Worshipers. All the stories are taken directly from the comic book. All of the cartoons are going to be quick 2-7 minute stories just like the comic book.  Future shorts we are working on will feature a despondent boogie man, the ghost of a t.v. cowboy, the Clot…basically all the best characters from the series will get a run up the flagpole until we figure out which translates best into animation.
Jim: I no longer get Mad Magazine, are you doing the Arsenic Lullaby characters in Mad or other characters? Is there a collection of just your work?


Doug: I am doing one page gag stories, same vein of humor as Arsenic Lullaby.  Once I sell something to Mad they own it lock stock and barrel so I have been stingy about using tried and true A.L. characters, but being securely rooted by Mad’s shield of “satirical purposes” I have been doing stories about characters that I don’t own like Superman, Frankenstein, the wizard of Oz cast…stuff I would be concerned about being sued for in my own magazine. 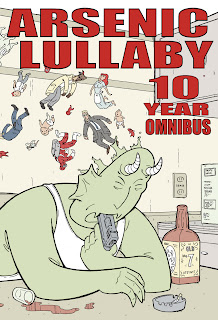 Jim: Where is the best place to order your work?
Doug: Normally I tell folks to pester their local comic book shop but the first shipment of this new collection has been selling out fast so their best bet may be to just order it from our website (click on the link) and if they do so they should make a note in their order that they would like a quick sketch in the book.  I try to make sure each copy that is picked up directly from us is a little customized.

So endeth the interview. I can’t possibly stress hard enough that you should pick up Doug’s work it is absolutely hilarious. The more times I read it the funnier it gets. Doug has a sense of the absurd and the bizarre mixed in with an edge like no one else. Truly in a class of his own.
Posted by Jim at Friday, September 30, 2011