Gwen: Not too many books to cover this month. But at least there's a cute robot!
Lee: It was a light month. I am not sure if there just wasn't anything all that interesting or just really bad hype. But, there are some really expensive selections just in time for Christmas... well order them with Christmas money. 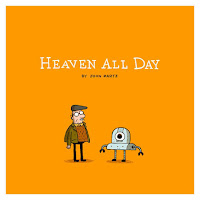 Adhouse Books
Heaven All Day SC by (W/A) John Martz
The lives of a lonely factory worker and an abandoned robot become intertwined as the man struggles to complete his life's work - a mysterious contraption that he must keep secret from the outside world. Visit Martz here.  24 pgs, $4.00
Gwen: Oh my gosh that robot is so cute! I'm sold. Seriously though the concept looks really good so I'd be interested even if the robot wasn't adorable.
Lee: I have to agree, this looks great.

Arcana Studio
My Best Friend's a Booger GN by (W/A) Tyler Kirkham (W) Rian Kirkham
Who would have ever thought you could have a booger as your best friend? Well, if your imagination is anything like Skyler Grayson's, the possibilities are endless! At a time when Skyler is feeling really down and all alone, he finds his greatest friend in - you guessed it - a sneeze! $6.95
Lee: As soon as I read the title I knew I had to pick this book. So I picked a winner! Bwah ha ha!!!
Gwen: Ewww. Just, ew.

More picks below the break....

Archaia Entertainment LLC
Jim Henson's Dark Crystal Vol. 01: Creation Myths HC by (W) Brian Holguin, Brian Froud (A) Alex Sheikman, Lizzy John
First in a three-part prequel series delving into the origins of the world of The Dark Crystal and its unique characters and denizens. Spanning a time period from thousands of years in the past to the start of the original film, this graphic novel epic will tell the definitive origin of The Dark Crystal, told under the supervision of The Jim Henson Company and original conceptual designer, Brian Froud.
Lee: I though the Dark Crystal movie was fun and unique but that’s about it. The ideal of a prequel doesn’t really appeal either, BUT art by Alex Sheikman is too good to pass up! Alex is an outstanding artist so I know it will look really, really pretty. As long as Holguin turns in a decent story this will be an easy win.
Gwen: Ok... if not for the artist I could care less about this book - I vaguely remember liking the movie as a kid but I can't say the plot was enough to make me interested in a comic book series.

Last Days of an Immortal HC by (W) Fabien Vehlman (A) Gwen De Bonneval
In the distant future, Elijah is a member of the Philosophical Police, who must solve conflicts that arise out of ignorance of the Other. Two species are fighting a war with roots in a crime committed centuries ago, and Elijah must solve the crime and bring peace between their species, and confront his own immortality in the process. In a world where science provides access to eternal life and death no longer exists, why do so many want to give up on life? Serious, hard science fiction, translated from the award-winning French graphic novel. 152  pgs, $24.95
Gwen: Very interesting set up for this story. The cover art seems well suited for the mood of the story as well although I couldn't find any other preview art.
Lee: Archaia is one of the great importers of Euro books so I am confident this will be good.  The premise sounds great too.

Boom! Studios
7 Warriors #1 by (W) Michaël Le Galli (A/C) Francis Manapul
From the fan-favorite artist of The Flash and Adventure Comics comes 7 beautiful women, 7 Warriors! In 6th century Libya, the capitol of an ancient nation is surrounded by the Persian and Byzantine armies. Seven are chosen to save the heir to the kingdom. Seven Warriors. Seven? sexy, gorgeous women? An exquisitely rendered tale in the vein of 300, written by Michaël Le Galli and drawn by Francis Manapul. #1 of 3, $3.99
Gwen: Is it just me or does the main appeal of this solicitation seem to be hot warrior women? Well, not much of a draw for me. Of course the actual premise may be cool - I'll wait until someone I know reads it.
Lee: I actually picked this because I thought it might appeal to you.  I thought the strong Wonder Woman vibe was going to be a winner.  But, I realized I skimmed the hype and upon re-read, I can see where this smacks of men writing women for men.  So, maybe not for you but just fine for me.

Operation Iron Cross #1 by (W) Herik Hanna (A/C) Trevor Hairsine
X-Men: Deadly Genesis and Wisdom artist Trevor Hairsine brings you WWII action like you've never seen before! It's 1936. A German intelligence officer is tortured by his superiors. They want to know why he has turned against them. Imprisoned, he gives up nothing as he seemingly waits for death? or the right time to strike! Written by Herik Hanna and drawn by Trevor Hairsine, Operation: Iron Cross gives you deadly intrigue and bone-crunching action exactly as you like it! #1 of 3, $3.99Gwen: I just never get into the war-genre comic books. I'm sure there are some great stories but with so much out there to read I rarely pick up war books.
Lee:  Even though the hype doesn't say it, this is another import by Boom.  This is part of a series put out in France’s Delcourt called Le Casse, translated as “The Damage.”  French war strories are pretty different from their American counterparts and worth reading.   And, Hairsine's art will be fantastic I am sure.
More tomorrow....
Posted by Lee at Wednesday, September 28, 2011