The Week in Review – August 31 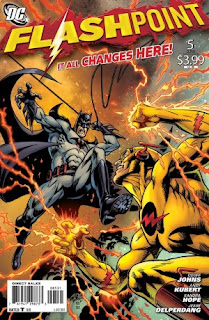 Of course the big deal this week is that Flashpoint #5 came out ending the old DCU and that Justice League #1 came out and started the revamped, re-launch, rebooted, whatever you want to call it, new DCU. My viewpoint can be seen in detail on the sister blog “Why Comic Books Suck” with reviews of the books here and here. I called the site a negative name, but that does not mean all of my views and reviews will be negative I just thought it was amusing to give it a negative name. Of course in this case my view of Flashpoint is negative as I think the internal logic of the book did not hold together. Justice League #1 in retrospect did a good job acting as a starting point for the new DCU, but as a fan of the old DCU it was a little jarring at times. Still the bottom line will be the new series released by DC. Like I have said numerous times before that the idea is to tell good stories, I will be still be a little sad about some of the changes, but that is because I don’t know what the new stuff looks like yet.
The actual week was weak and of course one of the lightest weeks I have had in pretty near forever it seems.

Amazing Spider-Man #668 hit the stands and I have to say between the whole Spider-Island story and Ramos’ artwork I’m not “digging” this book that much. The whole feel of the book is off. Carlie, Peter’s new girl-friend, does not work for me, everyone running around with Spider powers is just silly and Ramos’ art work is too loose and has a cartoony feel to it. I’m not sure I like the epic scope Marvel is trying to fit into too many of their books. It is funny because Fear Itself is a big winner for Marvel and I don’t like that series either, but I’m enjoying DD, Captain America, Mighty Thor and some other stand alone series.

Warren Ellis’ run started with Secret Avengers #16. I got the feeling that each issue will be stand alone, but I’m guessing combined it will all form one picture. I could be totally wrong but that is a gut level sense that I got.  The story itself is a little generic as Super Soldier, Black Widow, Beast and Moon Knight all are on a mission to trace down some Doctor Doom radiation associated with time travel. They find an entire city being set up to travel through time and the Shadow Council has control of the city. To stop the device they set off an atomic bomb as they escape the city. Not 100% heroic as they let the bad guys fry. It has good snappy dialogue and was a fun read.

Locke & Key Clockworks #2 of 6 came out and wow did this book start with a harsh opening. The Demon now inhabits Bode’s body. Bode’s friend figures out he is not Bode and threatens to tell Bode’s brother and sister. The Demon (as Bode) pushes the other kid under a bus killing him – damn. I thought this arc was going to be about the past 100%, but we are right back in real time and by the end of the issue Demon Bode has succeeded in getting the Omega Key. Yikes? If you are not reading this book, you are missing an excellent series Joe Hill (writer) and Gabriel Rodriquez (artist) are crafting one of the best series ever done in comics. A horror story mixed with a touch of a fantasy element and rock solid characters that bring the tale to life.

The Ultimate Universe from Marvel continues with Hawkeye #1. I’m enjoying getting back into Marvel’s Ultimate Universe and enjoy that I only have to get four series right now, even better this is just a four issue mini-series. Ultimates #1 had a little too much going on and the story went nowhere. With a tighter focus and less space (four issues versus an unlimited series) this book moved immediately. Jonathan Hickman (writer) and Sandoval & Tarragona (artists) did a nice job telling the story. A government is creating their own mutant “weapons” while wiping out all the other countries potential mutants. Nick Fury wants Hawkeye to get the serum. A little heavy on the exposition, but Hickman revels in explaining his comic books science in detail. After that we get into some action right away as Hawkeye has to take out some super powered attackers. It should be a fun series. The one minor quibble I have is the poly-bagging of these books; it stinks of the whole pandering to collectors that almost ruined the industry in the nineties.
Keeping it short and sweet for this week, but if you add on the initial two reviews I linked for you I can bore you to death with my talking about comics. I find it amusing when I get questions from people who are interested in comics and new to the field, so to speak, as I have to remember to keep it brief so I don’t overwhelm someone with an information overload.
Next week has a whole lot of number one issues. The list is Action, Animal Man, Batgirl, Batwing (really?), Detective (now by Tony Daniel L), Green Arrow, Hawk and Dove (Rob Liefeld – yikes – one and done?), House of Mystery, Izombie, JLI, Men of War, OMAC, Static, Stormwatch, Swamp Things, Sweet Tooth, Hulk, Moon Knight (yes Lee you will get it), New Avengers Annual, Punisher, Red Skull, Thunderbolts, Wolverine, Wolverine Debt of Death, Cobra, Godzilla, Big Lie, Morning Glories, Spawn, Grim Ghost, Jennifer Blood, and Warlord of Mars Dejah.
That’s a wrap, see ya next week.
Posted by Jim at Monday, September 05, 2011