I've always found it interesting how comics reflect the times they are written in.  Whatever the latest 'trend' whether it be monsters, cowboys, or spacemen it's only a matter of time before it shows up in a comic book.  This week I want to look at a long running series that captured every single trend... often with inadvertently comic results.  That series is Rex The Wonder Dog. 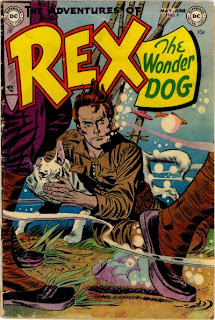 It's not hard to figure out that Lassie is the inspiration for Rex.  But did lassie ever fight commie bastiches??? HECK NO!  Was Lassie ever able to hold her breath underwater (with a little help) to hide from the enemy??? HECK NO!

As silly as this cover is, it makes sense compared to the ones below the break. 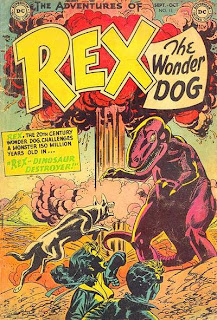 Another 50's trend.  Dinosaurs!  In this case, Rex - Dinosaur Destroyer - is attacking a T-Rex.  Dog vs. Dinosaur.  I bet the dog wins. 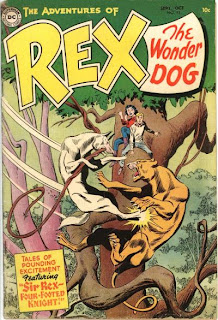 Another 50's trend.  Tarzan!  Bet your dog can't swing from a vine in the jungle. 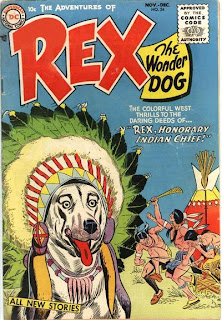 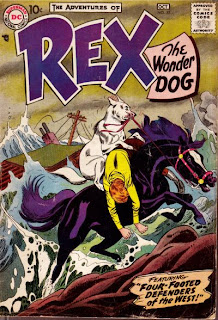 Another 50's trend.  Black Stallion!  Now Rex is riding a horse.  Is there nothing this dog can't do? 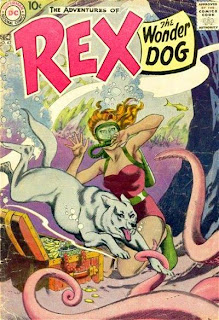 Another 50's trend.  Painted covers!  Ok, this was a trend only related to comics but Rex got a cool painted cover.  Now, if only I could figure out how he was deep sea diving and battling an octopus.

Aaahhhh who cares, it looks great and that's all that matters.

So the covers are silly but the book was a visual masterpiece.  Gil Kane drew the interiors for the entire series and it looks great.  The stories are just as goofy as the covers but the art is soooo good.