Indies Previews for February Part 1 of 2

Thomm: Who am I? What’s my name? Christmas still hasn’t arrived? I’ll sleep when I’m dead, I guess.
Lee:  I am with you on that.  What happened to Christmas being relaxing?  This year has been crazy and not always in a good way.  I need a vacation... from my vacation... which hasn't even started yet. 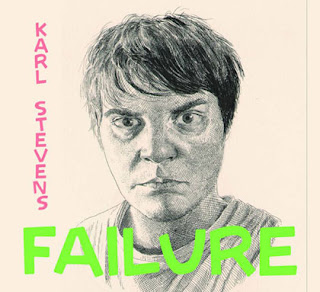 Alternative Comics
Failure GN by (W/a/c) Karl Stevens
The new book from the acclaimed author of Guilty, Whatever, and The Lodger. Failure collects Karl Stevens' beautifully rendered humorous comic strips from the Phoenix, Boston's leading alternative weekly. His slice of life vignettes and surreal anthropomorphic experiments are revealing sketches of urban America and beyond. Features over fifty pages of unpublished material. 180 pgs, 11x9, FC, $21.95 See a prime example of the strip here.
Lee: This is… well… it’s a collection of comix from an alternative newspaper. Do I really need to get into the details of it more than that? Either yer gonna love it or not. I think I’m gonna love it because I have a weakness for self-deprecating humor and this appears to be really good at it.
Thomm: Comix are always hit and miss for me. Too often there’s an in the know quality to the humor that escapes me. Obviously, I’m not in the know.

7 more completely different books below the break which look nothing like the first book I picked! 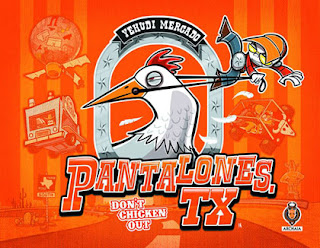 Archaia Entertainment LLC
Pantalones, TX: Don't Chicken Out HC by (w/a/c) Yehudi Mercado
Animator Yehudi Mercado brings the zaniness of Saturday-morning cartoons to this wacky graphic novel! Pantalones, TX follows the adventures of a band of misfit kids in a rural Texas town as they try to outwit, outrun, and outprank the ever-vigilant, fried chicken truck-riding sheriff and his giant chicken. Featuring spoof ads and an eye-popping orange casewrap in landscape trim, this book will appeal to boys, girls, and their Adult Swim-watching parents! 112 pgs, 9x7, FC, $19.95 Visit Yehudi here.
Lee: I love silly comics and it doesn’t appear to get much sillier than this. It was released on Comixology as a couple of single issues so you can try it out there if you prefer digital.
Thomm: Ah, good low brow humor. Now that’s better. Read it now before Texas secedes or you have to get it shipped internationally. 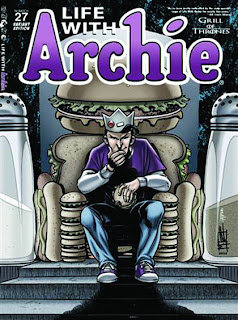 Archie Comic Publications
Life with Archie #27 (Norton variant cover)
Archie Marries Veronica. Kevin takes the first step onto the campaign trail as he attempts to get his name on the ballot for U.S. Senate, but he quickly discovers that he may have bitten off more than he can chew. Meanwhile, Archie's dream gig as president of Mirth Music may not be what it seems and Veronica's latest hire has a hidden agenda all her own. Archie Marries Betty. Reggie does his best to fill his recovering father's shoes at the Gazette, which is proving more difficult than anticipated. An emotional disconnect threatens to pull the title couple apart with career-driven Betty continuing to keep Archie on the backburner. Can they turn it around before it's too late or are they on the path to Splitsville? 48 pgs, $3.99
Lee: Ummm, this is an Archie comic right? When did Jughead become evil tyrant dude? He looks like he’s snapped. I can almost hear his shouting “Off with her head!”
Thomm: Like the Funky Winkerbean jump forward in time, writers seem to perceive adulthood as naught but doom and gloom, especially if your teen years were filled with aimless hijinks. When does Archie get his testicular cancer diagnosis? 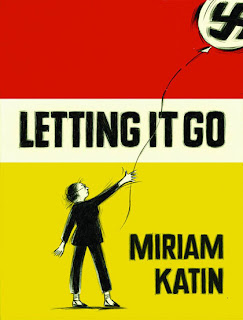 Drawn & Quarterly
Letting It Go HC by (w/a/c) Miriam Katin
The world of Holocaust survivor and mother is turned upside down by the news that her adult son is moving to Berlin, a city Katin has villainized for the past forty years. As she struggles to accept her son's decision, she visits the city twice, first to see her son and then to attend a Museum gala featuring her own artwork. What she witnesses firsthand is a city coming to terms with its traumatic past, much as Katin herself is. Letting It Go is a deft and careful balance: wry, self-deprecating anecdotes counterpoint a serious account of the myriad ways trauma inflects daily existence, both for survivors and for their families. 160 pgs, 7.5x10, FC, $24.95 You can get a 5 page preview here.
Lee: I wasn’t sure about this book at first but then I saw the preview. In a simple 5 page preview, you can get completely sucked in. That’s a testament to Katin’s story telling skills. Not to mention the art is stellar.
Thomm: The topic alone would have been a draw for me, but the preview really sells it. I sense a pick for best buy of the month. 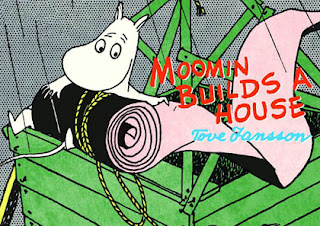 Moomin: Builds a House GN by (w/a/c) Tove Jansson
After Mymble's family comes to visit the Moomins, her littlest and most badly behaved sister, Little My, is left behind. She promises to behave if she is given Moomin's bedroom; Moomin, tired of being forced out of his room, decides to build a house where all the rooms will belong to him. With Little My helping out, things are sure to go awry, but in the end, Moomin's house-building misadventures teach him the value of a home. 56 pgs, 8x6.5 , FC, $9.95 You can read a stack of Moomin’s here.
Lee: Moomin is awesome! I have several of the larger, more expensive, collections but this is a great, and inexpensive way to see one of the World’s greatest strips. Moomin started in the London Evening News, in 1954. From there it went on to be published ‘round the world. It’s a great series that is part humorous, part melancholy, and all fun.
Thomm: See, Lee’s promotion of the book is much better than the one someone paid to have published. The description in the blurb is dry and made me think of educational materials. 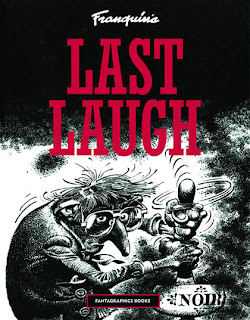 Fantagraphics Books
Franquin's Last Laugh HC by (w/a/c) Franquin
In the late 1970's and early 1980's, as the great Franco-Belgian artist (and creator of Gaston Lafgaffe) Andre Franquin's world view became ever-more depressed, so his work took on a darker hue culminating in a series of joyfully morbid blackout pages that pictured the world as a bleak, miserable, and hopeless hell, all executed in an exquisite black and-blacker symphony of pen lines. Fantagraphics is proud to present Franquin's complete Idees Noires collection, including many strips translated into English for the first time. 72 pgs, 7.25 x 10.5, b-w, $16.99 Read about the artist here.
Lee: What happens when a comic genius gets depressed? He hosts a telethon… no no no that’s only in America. In other countries, they revel in their depression and make fantastically dark cartoons! You really should check out this one pager.
Thomm: Man, this has got to be better than the telethon option. I can’t stand those things. 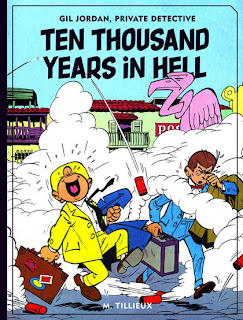 Gil Jordan: Ten Thousand Years Hell HC by (w/a/c) Maurice Tillieux
Ten Thousand Years in Hell marks a sharp departure from the moody, urban detective style of Fantagraphics's previous Gil Jordan graphic novel by Tillieux, Murder By High Tide. Instead, the title story is a rollicking prison-escape yarn set in South America. The second story, Boom and Bust, features one of Tillieux's patented spectacular car crashes. Tillieux's masterful graphics remind the reader why he was considered one of the top Franco-Belgian cartoonists of his time and, indeed, of any time. 96 pgs, 8.25 x 11.5 , FC, $18.99 Read about the artist here and see a preview from Jordan’s previous book here.
Lee: I picked up the previous Gil Jordan book and loved it. Actually I loved it after I got it back from the kids. The art is fantastic and the story is enjoyable by everyone. This is highly recommended.
Thomm: This may be the first time I’ve seen Franco-Belgian come up in our meandering looks at the future, and now we have it twice in one post. Is someone feeling nostalgic for life in France? Oh, and the book looks to be excellent, too. 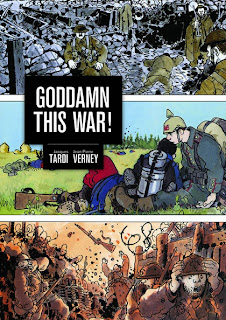 Goddamn This War! HC by (w/a/c) Jacques Tardi
A perfect companion piece to Tardi's It Was the War of the Trenches, Goddamn This War! is a new, full-color graphic novel-length exploration of World War I that is broken down in a more chronological, historical way than its double Eisner award-winning precursor (although it shares Trenches' sustained sense of outrage, pitch-black gallows humor and impeccably scrupulous historical exactitude) compounded by an extensive historical text section in the back, stuffed with spectacular, fascinating and horrific period photographs. 152 pgs, 7.25 x 10.5 , FC, $24.99
Lee: This is a relist but well worth mentioning again. Tardi’s other book, It Was the War of the Trenches, was beyond fantastic. It was one of the best stories about WW1 that I had ever read. This book is the companion to that and not to be missed. If you like war stories with a real personal perspective then you will love this. You can read my long review of Trenches here. Thomm: Most people seem to have little knowledge of WWI beyond having had to read All Quiet on the Western Front in school, and I wonder how much that even happens. I love the topic. It was a major transition point in world history, demarcated by a war fought with some of the worst tactics in history that cost Europe huge numbers of a generation of young men. It also led to some great literature from the survivors of that generation. This book’s title sums up a lot of what was felt by the trench level combatants.

Tomorrow, the conclusion.
Posted by Lee at Wednesday, December 19, 2012