Before we get to the crux of the matter we need to first provide you with a list of next week’s books, with the clean and concise list here and the more detailed offering page here. You will note the list is almost bare as it is actually a skip week. Publishers have cleverly decided to ask retailers to hold these books so they have something for the interim holiday week. I’m of course most curious to read Spider-Man #700 and see if Marvel is making a serious change or what they are planning. Sadly, like New Coke, I believe the backlash to any real change will be a hasty retreat to the status quo.

What this means for the blog is that next week will not be a week in review as I have asked my store to not ship anything until the next week. The postage cost will be half the cost of the books. I have decided instead to do a series of solo reviews of a few comics from my massive pile of over 40 freaking titles this week and will post them as few post over for December 24 and December 31. So it will be Part 1, Part 2 this week and we will see how many parts in total for next week. Of course readership is usually down during the holidays but still Merry Christmas and Happy Holidays to everyone. 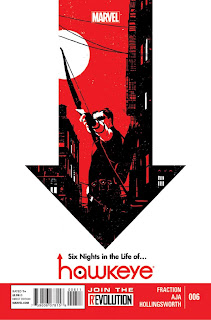 The one and only book I’m reviewing for this post is Hawkeye #6 by Matt Fraction writer, David Aja artist and Matt Hollingsworth colorists. My pithy title for the post is due to the fact that this book is receiving almost universal praise as the best thing to ever hit the stands. Per many others it is monumental and blowing people away with it brash and boldness. If I believe all that was written I would swear this is the next Dark Knight Returns or Watchmen. (A quick side note, it has been too many years since someone has redefined the super hero in such a dramatic fashion.) It is a good book even a very good book, but it is not all that.

First off in regards to the actual series, let’s face it a Hawkeye series was only green lit because of the Avengers movie. Secondly no one at Marvel expected the series to be much of anything. That means that Fraction was left to play with this character. Fraction was allowed to make this Clint Barton vastly different from the many iterations of the character done before and in truth that is a positive. As I read the book this version of the character has a genuine quality to him that is lacking in many super hero characters. At the end of the day when this book was released the bar was so low that anything of quality was going to be a surprise. Fraction has infused the book with a light hearted tone and a street level feeling that makes this Clint Barton more of an everyman as opposed to a true super hero. As in the movie a guy with a bow and arrow next to a Norse God, high tech Armor and a super solider is out of place. Therefore Fraction removed him from that place. Add to that mix the artwork of David Aja and the color work of Matt Hollingsworth and you have a book that is a fun and quick read. This of course has created the showering of accolades for the book.

And of course being the contrarian that I am the more the book was being praised as the Second Coming the more I took a harder critical eye in my view of the book. The more I looked the more I saw it for what it is a wonderful stage illusion that loses some of its charm once it is explained. Nothing I’m saying means I do not love this series or that I want the series to fail. Fraction has made me a fan of his work with this and his FF work, but it is just a very good series, it is not the best book out there, it is not the most innovative thing ever done. It is a very good series, but let’s be honest about it.

What is great is David Aja’s art. He has a minimalist touch to his work and is far from a photo realism of many artists. It is almost a simplistic style and in the family of the Cameron Stewart, Cliff Chiang and the Chris Samnee(s) of the art world. The simplistic nature of the actual drawing belies the great story telling, layouts and deft hand in displaying emotions. He uses body language, camera angles and every tool in the box to tell a great story. The words, even in conveying complex story parts, are superfluous. To his credit Matt Fraction leaves many panels wordless as to add anything would be a crime. It takes restraint for most writers to know when be quiet and let the art speak, Fraction has done a great job in that area.

The other great piece of this book is Matt Hollingsworth. The color palette that he is working with adds and enhances the art. It is not garish or over the top, it is muted with a wide variety of colors. Each book regardless of the artist has the same feeling to it as the issue before. I believe the advent of digital coloring has been one of the great enhancements in comics as once a colorist finds the perfect palette he can save those exact gradations for the next issue.

Finally we get to the core of what this book is about and that is the writing. Matt Fraction is doing a good job, not a great job. I’m enjoying it, but I see problems with it that as an editor I would push Matt to be even better. Issue #6 is as good an example of the series as any. First off Marvel is publishing this series almost every other week. I know Marvel plans to make many of their book 18 issues a year or more then 12 and while the pace is fine for decompressed stories, it has enhanced the sameness I get from Hawkeye. Hawkeye has become the punk in almost every issue of the book. He rises above it after a point, but he has been beaten up by some many street level thugs that I feel his place as a major level hero has been eroded. Hawkeye should be able to stand up to some level of criminal or else how can he even hang his hat out as a legitimate hero. I have never been a fan of the “Charlie Brown” type character being cast as the hero. For years many Spider-Man fans talked about him as “Charlie Brown”. Clint needs to be more. An occasional defeat is fine and certainly part of the super hero cannon, but it is already feeling like a formula.

Next is the structure of the story. I believe that a strong writer can tell a story that starts at the beginning and moves forward in a straight line until the end. Flashback, jump cuts, flash forwards and all the rest have their place in certain stories and certainly can spice up a tale or two. Fraction is seemingly relying on those features to try and make a story seem cool or edgy when it is not. This issue was about Hawkeye taking a break from being a hero, getting beaten up by the Russian mob, wanting to quit to protect others and getting his mojo back after Kate (the other Hawkeye) lecturing him. He becomes the hero again and we get a warm Christmas story in the mix of it. This was a very good issue and a very nice story. The problem is the jump cuts going from Dec 18 to Dec 13 to Dec 18 to Dec 17 to Dec 14 to Dec 15 to Dec 19 to Dec 15 to Dec 16 to Dec 19 where not necessary. It was a trick and not needed for the story. It is way too much of pulling a rabbit out of the hat and almost not trusting that you have a good story. It is a good story and should have been told in a linear fashion. Fraction is telling a story stories that didn’t need the trick arrows in his quiver.
As I said this is a good to very good book, but not a great book. Hawkeye is on my reading list and will be with Fraction as the writer for a long time, but I hope he learns to trust what he has written and stop trying to dazzle us and just tell us the story. One thing that would be nice is that in a collected edition or a digital version we should be given the linear version of the story.

Part 2 Later Today – The DC Preview Review Wednesday and then one last time next Monday before the New Year.
Posted by Jim at Monday, December 24, 2012