I will give the overall week a B, but it should be an incomplete as I have read next to nothing from this week. When my list gets too big and I have limited time to devote to reading the books back up way too fast. Still I have to say that in general I have been very happy with the quality of what has been coming out recently. 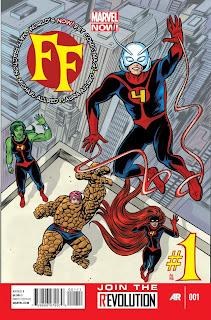 First up is FF #1 by Matt Fraction and Michael Allerd. I almost don’t want to like some of the Marvel Now books because I’m trying to cut my list down and these books are making it hard to do. This is going to be a quirky book as guaranteed with Mike Allerd’s art. He has a style that is unique and while I have learned to enjoy it, I can understand if someone does not like it. It has an elusive quality that makes it look different from anybody else, yet it is well done. Mike has all the technical skills to tell a story and certainly can depict any type of scene. The simple fact is his work is just different. The book itself is funny because the Fantastic Four recruit four people to take their place while they take a trip that is suppose to only take four minutes. Reed is putting together this pseudo FF just in case. I was also confused why we had all the kids talking to Scott Lang as I thought they were going on the trip with the Fantastic Four, but I’ll let that get worked out between the books. Fraction has really grown as a writer. He is structuring what appears to be a long form story with these two books and is doing some great episodic work over in Hawkeye. I have never been a huge Fraction fan (look an unintentional FF) but I’m starting to become one. Another side note; I heard the AR (Augmented Reality Application) had been updated and or enhanced and tried it out again. In this book it had some great video clips of Matt talking about the book and a nice segment explaining how Ant Man’s daughter died. I can officially endorse this idea and encourage DC to do the same. This is what all the digital books should be doing, embedding some extras into the books. At the end of the day the first issue was all set up to introduce the cast and next issue we will find out how Matt will make a 4 minute assignment last a couple of years. 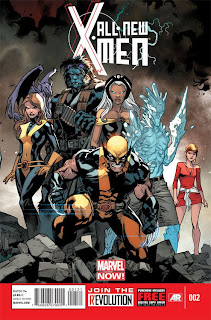 Next up is All New X-Men #2 by Brian Bendis, Stuart Immonen and Wade Von Grawbadger. I’m enjoying the heck out of this book. Beast brings back the younger X-Men into the current timeline and they escape from the Jean Grey School and take off so Cyclops can confront Cyclops. The crux of the issue was how the original X-Men are dealing with learning about their futures and the current X-Men reacting to the young versions of their friends. In the midst of all of that the Beast collapses succumbing to his illness. Of course he has failed to tell his team members about it. I have no clue how or even if they will solve the time conundrum without ruining the entire series. If you wipe their memories and send them back it invalidates the series in some way. If you send them back, how does time not change time and is a new universe is created? That of course would screw up the entire MU and that would suck it would be like Flashpoint with DC. It should be interesting and I’m curious if they have the answer to be used when needed or if they wrote themselves into a corner. The net result is a book to just sit back and enjoy and worry about time issues down the road, which is what the Beast did by going to get them. Bendis has some great ideas and right now his dialogue, which is atrocious at times on the Avengers, has been just fine here. This is another winning Marvel Now book. 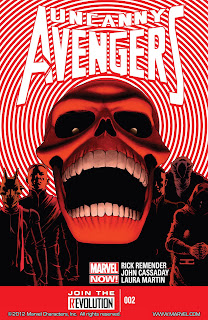 Great art, a very cool story and Uncanny Avengers #2, the Marvel flagship by Rick Remender and John Cassaday has everything going for it except a team. Remender is doing a slow build with this book as we have multiple storylines working their way together. The Red Skull is apparently a cloned version with the Red Skull’s memories from the forties. This version was just recently revived. He has now somehow added Professor Xavier’s brain into his and given himself super powers. The Scarlet Witch and Rogue are his prisoners and neither of the girls likes each other as issues revolve around them like a hurricane. Captain America is trying to put together a team with Havok as the leader to try and help sooth mutant human relationships. It is a very slow build and right now is somewhat disjointed. In addition the book has started out with a poor track record for getting the book out on time. The flagship Marvel title could suffer a little if they don’t pull it together. In the end I’m sure it will work out as the talent on this book is top notch and Remender is a master of building long storylines that have arcs within them (see Uncanny X-Force and Secret Avengers). This was a good issue but I expect even more more given the high profile of the title. I believe it needs time to build up to becoming a great book. 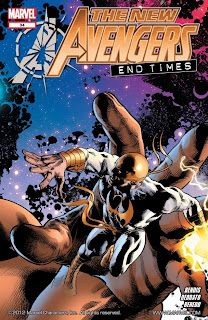 Last and least is Avengers #34 the last issue of Avengers by Bendis (yet he is doing the whole Ultron War thing, so there is that). Brian Bendis and Mike Deodato with a host of “jam artists” give us a story that restores Doctor Strange back as Sorcerer Supreme and sets up a possible Heroes for Hire series with Luke, Jessica and Squirel Girl. The actual issue itself was rather blah, but the end result was cool (although I was happy with Brother Voodoo taking over). The possiblitly of a new Heroes for Hire with that threesome could be fun as Bendis loves Cage and Jessica and would do a terrific series with them. The Avengers run of over 200 issues of Avengers stories by Bendis is a remarkable accomplishment. He managed to make the team into the center of the MU and added in characters who should have never been Avengers and made the whole thing work. Bendis has some great ideas, but his dialogue on this book was at times some of the absolute worse I have ever read. The inconsistency of the book is why I fell off the titles multiple times. In the end for better or worse Bendis run will go down as one of the most well known runs ever.

Another week and I have failed to mention a ton of books. There is just not enough time in the week to do everything that I want to do. The lament of many of us in this day and age when it seems like being too connected can also drain time like a leech.