Sadly this week I did not get to read everything and since I cannot judge a book I have not read I can’t comment. Wish I had more time but holidays, watching the Sliders series (why I’m watching or even got the DVD sets I’m not sure, but they have an odd charm), work, football season and all the rest eat into my timing.

For what I read this week I will give it a B, some very entertaining books and nothing I read was a total waste, of course I have not read everything I got. The wrap up includes some excellent books and a book many think has been the best book of the week every time it comes out. Onto the quick hits on what else I read. 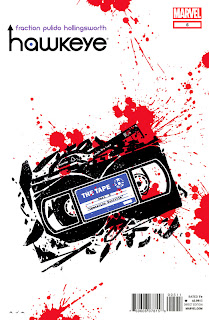 Hawkeye #5 is the book I referred to above. My friends at Cosmic Comix have voted this book to be the best of the week almost every time it comes out. Without David Aja on the art, who has never been able to do a monthly book, the book is still very good with Javier Pulido doing the art. Matt Fraction has developed a great rhythm with this book and it continues to be an elite series. It is nice to have a Marvel book allowed to be its own thing and have a small cast (Clint Barton and Kate Bishop, both Hawkeye).

Earth 2 #7 was a decent issue, but the thrill is gone. As I suspected it is taking way too long for this book to come together. This issue we are actually eight issues in, including the zero and no group is close to being formed. A lot of world building and character bits, but a new JSA is not anywhere in site.

Epic Kill #7 is just out and out action as our central character finally comes out of her coma and is now being forced to work for the US government. A hot Asian girl, solid art and plenty of action continues to make this over the top action/drama worth the price of entry. 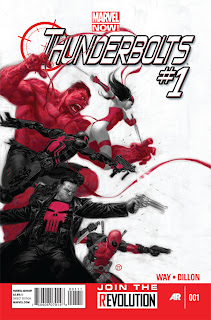 Thunderbolts #1 is another Marvel Now book. Steve Dillon’s art carried the title as the entire book was to just introduce the cast and pull together the team. It is a nice twist on the title of the book as the name is taken from General Thaddeus “Thunderbolt” Ross, alias the Red Hulk as opposed to a continuation of Thunderbolts are villains playing heroes title. Not sure if this book will be a long term keeper, but I will give it at least two more issues. A big failure is the cast is introduced as people willing to kill, but no reason for why a team is needed was given.

Punisher War Zone #2 (of 5) was another well done issue of the Avengers chasing the Punisher. This issue the Black Widow takes a shot and Frank out maneuvers her in the end. Can’t see how Frank will out maneuver any big gun from the Avengers, but I will enjoy Rucka giving us the story.

Amazing Spider-Man #699 shows Peter having to play the role of Doctor Octopus as he tries to get his body back. A very comic and just creepy scene was Peter accessing Doc Ock’s memories and stumbles onto the infamous Aunt May / Doctor Octopus consummation of their wedding vows. I say, more power to Marvel if they are actually ending Peter Parker’s story. Wacker, the editor, says they are as far as he is concerned, because he knows down the road anything can be changed. He is at least saying this is the last of the Parker story. If they do it the ensuing sales bump may give others the courage to take the step this is long overdue and give us the next generation of the heroes in Marvel.  I doubt it, but I can at least dream. 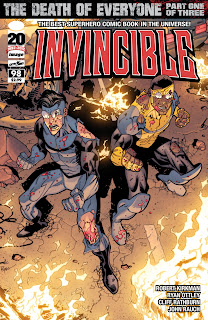 Invincible #98 starts the “Death of Everyone” building to issue #100 and man does stuff happen. Dinosauros has made plans to save the Earth by blowing up and melting Greenland, flooding a good portion of the world. You have to love Kirkman, always willing to give us radical change and shake things up, yet it is consistent with the characters.

Before Watchmen The Comedian #4 gives us a harsh look at the Comedian, the Viet Nam war and the machinations of governments. This was another good issue with fantastic art by JG Jones, one of the best in the industry. It is hard to go with an acid trip in the middle of a war.

The Human Bomb #1 was almost a pass for me, but the big sale pulled me in and I’m glad I got it. Gray and Palmiotti are slowly building up their own corner of the DCU as they rebuild the Freedom Fighters. The Ray mini-series, Phantom Lady and now this are all in continuity with each other. The actual comic itself was very enjoyable and Jerry Ordway always delivers top notch art.

Phantom Stranger #3, remember when I said nothing was pure trash, I forgot about this book and it is officially cancelled off my list. 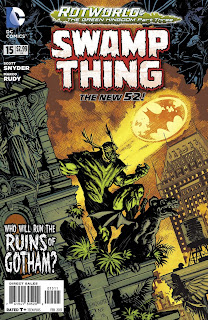 Swamp Thing #15 and Animal Man #15 are wonderful bookends as one is part of The Green Kingdom fighting Rotworld and the other is The Red Kingdom fighting Rotworld. A very unique cross over where both books are standing on their own, but together they are achieving a whole that is greater than the sum of their parts. Of course with writers like Jeff Lemire and Scott Snyder quality is expected.

Storm Dogs #2 was a great chapter in this CSI meets Star Wars mash up. It has great characters being built up; a nice setting being developed and we still are trying to solve the murders. I think this is a mini-series but it has so much potential that it should be an unlimited series. It also has some terrific back matter to round out an excellent book.

The Legend of Luthor Strode #1 (of 6) was incredible. No book has more blood and gore, yet it is all going to define who Luthor Strode is now. The story should be interesting to see what you do when all you do is kill bad guys. Luther never wanted to be a super powered Punisher and how this plays out promises to be another excellent story.

Another week comes to a close, but come back tomorrow and Thursday for a two part interview with Tim and Ben (Hawken) Truman.
Posted by Jim at Tuesday, December 11, 2012