Oh, what fun!  I had read the first issue of this and the FCBD issue, which more or less covered the same thing, and found it quite the all ages treat.  When the trade of 0-4 was available for free at Cards, Comics and Collectibles, it was an easy grab.  I guess there's not many all ages consumers at the store. 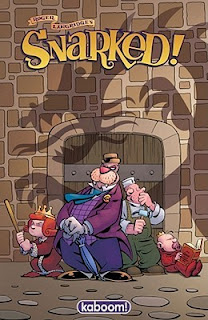 Based on the Walrus and the Carpenter from Lewis Carroll's poem within Through the Looking Glass, Roger Langridge gives the pair a far more full and interesting life than the brief sketch in the poem, where they simply served as vehicles for an ethical conundrum for Alice.

The pair are also quite nicer, though just as voracious for oysters.

Walrus (Wilburforce J Walrus) is the brains of the outfit.  He reminds me of Wimpy in Popeye, with his constant scheming for a free meal.  The Carpenter (Clyde McDunk) is a dim bulb, though good natured, who appears to be along for the ride with Walrus in the quest for oysters to eat.  Through some amusing coincidences they become champions of Princess Scarlett and Prince Russell (Rusty).  Rusty doesn't talk, but Scarlett says enough for both of them.  She's trying to find her missing father, the Red King.  After several scrapes avoiding the minions of the court handlers behind the disappearance, primarily their mercenary, Archibald Peregrine Gryphon, the quartet set sail to foreign lands to find the king.

It's all very light hearted and literary, much in keeping with Carroll's Alice stories.  Langridge nicely includes the source poem at the end of the trade, and some old school kid games and puzzles.  Obviously, young kids would enjoy this, but I found it to be very entertaining, too.  The charaters are well developed and the action engaging.  Even Rusty, a  pacifier dependent two year old, has a character all his own.