Nothing screamed at me this week as to how to break down the books, so I’m just going to run with doing so blurbs on each book. Some maybe long winded and some will be short and to the point. The breaking point will be somewhat random as I try to keep each post a reasonable length.

Of course before we hit the meat of the matter at hand I have the links to the clean list and the detailed list. These are provided for your research into next week’s books. It is a massive list as the week of December 26 is almost a skip week. I also believe many publishers are on a calendar year fiscal schedule and probably cannot legally count a book sold unless it ships. If I’m right that means a big push to get something out for year end.  Some of the highlights for next week are Before Watchman Moloch, Wonder Woman, All New X-Men, Captain America, Hawkeye, Happy, Saga, Black Beetle, Locke & Key, Rachael Rising and a ton of others, a massive week.

Alright let’s get into the books. 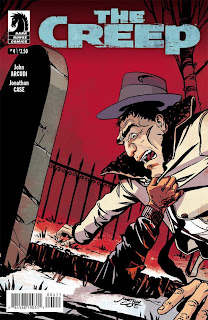 The Creep #4 brings this series to a conclusion. John Arcudi has produced a great character. I hope this book did well enough so that we get a second mini-series. The Creep solves the mystery of what happened to his old friend’s son and it is a tragic tale. It wasn’t so much his detective skill as just his dogged approach to not letting anything go. It is also a book that is a character study about a man whose disease disfigured him and changes the way he goes about his entire life.

Clone #2 takes this story to the next level. Luke, our main clone, gets to meet many of his brothers. We find out it was a project that was undertaken by the government as a scientist managed to use a cell and implant it in a genetically wiped egg and grow clones in a lot of women.  High level government officials are involved and clones are killing clones at the same time Luke is trying to rescue his wife. For a first time comic book writer David Schulner is doing a great job. This book has an all important credit, the editor. So many books need one. 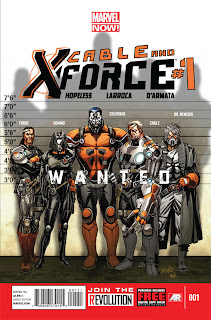 Cable and X-Force #1 was a book I was going to skip, but my store had a huge discount for a sale this week and I decided to take the plunge. Not a bad book at all. Dennis Hopeless, the writer,  is not someone who I was aware of before but this book is off to a great start. One thing I noticed right away was that the cast of Forge, Domino, Colossus, Cable and Dr. Nemesis are all newer characters. I know some have been around for a long time, but it is not just characters from the sixties, everyone is newer. I complain about no growth and movement and Cable running X-Force is a back to the future thing, but the cast are mainly second tier or lower players and fresher than many groups. The story sets up the group, gives us some of the premise and gives us action, adventure and characterization. This is another new one on my list. Damn Marvel for making so many of their books enjoyable for me again. .

Team 7 #3 is written by Justin (Luther Strode) Jordan. I’m still not 100% into this series as it is a little dense and has a large cast of almost total unknowns. This is another problem with an all new DC, Deathstroke, Grifter, Amanda Waller and Black Canary are the same names, but we have no clue about who they are in the new DCU. Also this book is being used to build background for a constantly shifting history of the new DCU and it feels like the book is a little scattered at times. I like Jordan’s writing on Luther Strode, so I will give this series a couple more issues to reel me in.

Deathstroke #15 was a re-try based on the previously mention Justin Jordan taking over as writer of this book. It was a clean start as Wilson is hired to kill and a petty dictator who can’t be killed. A lot of action and adventure right from the jump and a good story line as how does Slade kill someone who can’t be killed? Jordan is a rising star in the industry.

Next up is Batgirl #15 and the big bru-ha-ha is Gail Simone is leaving the book. I never cared for the series and have only come back for the Death of a Family arc. Gail does some terrific work (Secret Six and Birds of Prey) but I never felt like this book made a lot of sense and did not feel a connection with this version of Batgirl. Bottom line is Gail’s leaving has no impact as I’m off the book after the crosses over issues are done. 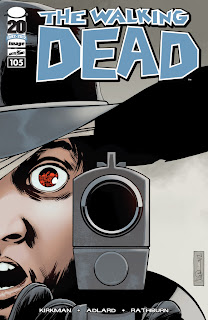 Walking Dead #105 was the best book of the week. Carl had snuck onboard a truck going to Negan’s camp and opened fire with a machine gun killing a bunch of Negan’s men. With that type of cliff hanger you had no clue what was going to happen. Negan appears to admire Carl and takes him under his wing. He forces Carl to reveal his face and we see just how damaged and horrifying Carl has been disfigured. Negan in many ways gets Carl better than Rick does. Rick still has a vestige of hope that Carl is his son and still a boy and Rick wants to preserve that, even in a world gone mad. Negan sees the tough as nails survivor who is almost fearless and truly willing to do what is necessary. Where we go from here, who knows but Kirkman still has plenty of twists and turns left in him to keep this book interesting.

Archer & Armstong #5 is a book that is on life support for me. Of all the Valiant titles this one is not clicking and to be fair I never cared for it the first time around. The art work is weak with the new artist for this arc and the story tries to be a buddy comedy and then be more, but it is not quite pulling it off. If there were not so many great books out there right now it might seem better, but it is the one Valiant book on the edge of cancellation for me.