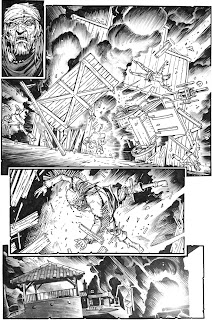 Jim: Is it more fun being the artist or the writer or does each bring its own challenges?
Tim: When I'm writing I want to be drawing and when I'm drawing I want to be writing. Writing is usually a less frustrating experience for me, though. I'm my own worst critic when it comes to drawing. I'm seldom happy with what I draw. When I look back at a story I've done art for, it never really turns out the way that I ideally envisioned it. I'm quite self-critical and insecure about my drawing skills.

Jim: How did Hawken come about?
Tim: In 2010, my wife, Beth and I took a trip to to visit Ben, who lives out there, working as a writer and educator. We took this whirlwind tour of north to and the Grand Canyon, south to and Bisbee. Along the way, Ben started telling me about this idea for a story he wanted to do about a sadistic mountain man. Somehow, the germ of those conversations started intertwining with input from the sights we were seeing. Our Kit Hawken character started taking shape pretty quickly. By the end of the trip, we knew we were onto something. Both Ben and I became totally obsessed with the character. When I returned home, sketches started pouring out of me and Ben and I were emailing each other and talking on the phone with each other very day-- sometimes three or four times a day-- running ideas past each other. We were totally on fire with the idea. In fact we still are, in many ways. It was really exciting. We finished most of the issue before we even started shopping the series around, which is really unusual for me. Initially we were just going to do Kit Hawken short stories-- wicked little horror tales about this grizzled old killer. But as things progressed, Ben and I knew we had a really solid tale on our hands so we started showing it to publishers.


Jim: What is the process with working with your son Ben? Who does what?
Tim: Ben and I sort of "head-jam" on the basic concepts, working stuff out, flying ideas and reference material past each other, working out plot and character points. The beginning stages remind me of the way that Joe R. Lansdale or John Ostrander and I usually work together, actually. After that, Ben starts roughing in a script, usually shooting two or three drafts past me before we settle on something.

We're quite different from each other as writers, actually, so we tend to play off each others' strengths: Ben is great at structure and plotting, and for throwing in these unexpected, unique scenes and action sequences. I have a penchant for dialog and for keeping the storytelling very direct and communicative.

Anyway, after a few rough drafts, we final arrive at something we're both happy with. Ben finishes up the script so that the editor can easily follow it, then he shoots it to me and I go from there.

Jim: Hawken left it open for a sequel, is there one planned?
Tim: We would love it. Ben and I are still on fire with the character. No offense to any other writers or projects I've ever been involved with, but of all the characters I've ever worked on, I think Kit Hawken is my favorite. That said, we'll probably take a break with something else for a little while. In fact, a publisher has invited us to do something with another beloved character of mine, Scout, and Ben and I are starting to put that together now. More news as it develops.


Jim: What other new projects or books from you are on the horizon?
Tim: I think I've mentioned most of them above. Chris Ryall at IDW has commissioned me to do a cover for their JUDGE DREDD title.  I just did the cover for a Joe Kubert tribute issue of the new COMIC BOOK CREATOR magazine from Two Morrows. That was a real honor. For non-comics work, I'm doing art for a Rory Gallagher box set that I'm really excited about. Rory was my favorite guitarist and performer, ever. I've also been asked to all the covers for the Grateful Dead's 2013 Dave's Picks CD series-- five paintings in all.

Jim: After talking with Tim we then asked Ben a few questions. First off what is your background in regards to writing?
Ben: It's something I've always done, starting with Axe Cop-like stories dictated by me and drawn by Dad when I was a little kid. I started thinking that I could be a writer after I got a national Scholastic award for a story I made in a high school creative writing class. I went to school for Game Art & Design at the Art Institute of Pittsburgh and got involved with the team behind Black Mesa, a free recreation of the PC game Half-Life. I was Story Lead, in charge of readapting the old script, fleshing out new material, directing voice actors and overseeing the choreography team that put the scripted sequences in game.

Also I've worked as an editor and educator in , helping kids write personal essays for publication in local newspapers and radio.

Jim: Has comic book and/or writing always been a passion? 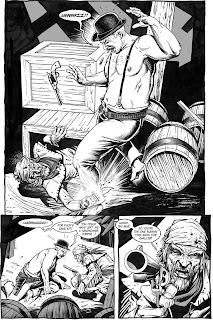 Ben: Comics haven't always been a passion, but I've never taken a break from writing and creating stuff. The same tools of visual storytelling attracted me to video game creation, and the tiny bit of narrative knowledge I possess really came in handy with my work in . I'm very interested in comics these days, and have spent a lot of time catching up on everything I missed or overlooked in the past. I mainly read DC books when I was younger, since they sent Dad a box of everything they published each month. Now I'm trying to branch out. For instance, I didn't like Image when I was a kid (never a real superhero fan), but now they are publishing some of the best, most diverse stuff out there.
Jim: Hawken is a very different type of character and extremely violent. What was the genus of the character?
Ben: It started when I asked Dad if he knew any stories about people who had survived scalping. From there, Kitchell Hawken was created and we couldn't stop developing him. Everything was funneled back into this character. We eventually started to work on the first tale. The story was 8 pages, but expanded up to 12, then 16, until eventually I said we should just go all the way and get 22 pages out of this. That short eventually became issue 1. We wanted to make something very pulpy and over-the-top, far beyond any traditional comic book protagonist on the shelves right now. An ugly, old man as an action hero seemed like the way to go. 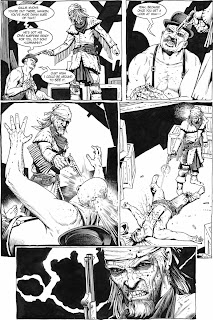 Jim: How does the collaboration work with the two of you?
Ben: We worked together on all the main plot points and then I put together breakdowns of each issue and fleshed out the script and rough dialog. These drafts would exchange hands a few times until Dad could start the artwork. As pages rolled in, I always make tweaks. Dialog reads differently for me when it's on top of the art.

Jim: Father/son dynamics can be a challenger, did the relationship impact the work?
Ben: Only in the positive. It's nice that I can call him on my walk to work and talk about how things are going, personally and professionally. We have a lot of the same influences, and love to share whatever we are into at the moment. This has created our own shorthand when it comes to storytelling, so I have to remind myself of that whenever I'm writing for another artist. I need to make sure they can understand what I'm putting in the script, since I don't have them to talk to nearly every day.

Jim: Hawken's story is far from over, what else is planned for Hawken?
Ben: After the first arc, Hawken has added a few ghosts to his ranks that are important parts of his history with The Ring. We want to explore more of Hawken's past as he moves closer to his goals, and introduce more extreme characters to cause trouble. Our goal was to find the strangest corners of the Wild West. I have learned a lot of neat and weird stuff while doing research, not to mention the things you pick up just by living in the Sonoran desert.
And, of course, we want to add lots more to the body count in as many ways as possible. For instance, I've got an outhouse death scene in mind that we couldn't fit in the first arc.

Jim: Do you have any projects just as writer planned?

Ben: I'm trying to develop a few personal projects right now, but nothing ready for an artist or an editor. I've got a story in Shawn Aldridge's upcoming Vic Boone anthology, Bourbon and Buckshot, drawn by Lonny Chant. I'll also have a story in FUBAR: AMERICAN HISTORY Z, the next volume of the New York Times bestselling series.

Jim: Your father's art is possibly the best it has ever been. I know you can't be 100% objective, but how do you feel about his work on Hawken.

Ben: He's getting a lot more computer savvy, and it's helping him tell stories in ways that he couldn't beforehand. Now he can set up his scenes as he sees them in his head, no longer restricted by just his reference material.
And that brings us to the end of our interview. I want to thank both Tim and Ben for taking time out of their schedules to answer the questions.

Now go out and buy the Hawken trade.