The Week of November 28 in Review Part 1 of 4 American Vampire, Thor and Chew

So this week is even more of a crush on time then last week. First off the post office ran late and my books did not show until Friday. Second I had some fun time set up to visit my grandson Connor on the weekend. He is almost one already, time does fly. Next the Ravens game is on Sunday and that is a must watch. Add in to that work, putting together an interview for the blog with Tim and Ben Truman focusing on Hawken and well time is pressed. This means a whole different approach.

This week I have chosen 13 books out of over 30 to review. I read three of four books and then did the write ups. They were selected partially based on the fact that Cosmic Comix rated many of these the best of the week and others I choose for reasons I will explain as I get to them.

Before we get to this triumph trio of thrilling treats I will provide you with links for next week’s books. The clean simple listing is here and the detail listing is here. Using these lists is a good way to decide what you want and what you may want to pass on. The highlights for me are two Before Watchmen books the Comedian and Minutemen, Detective Comics, Hawkeye, Fury Max, Blackacre, Colder, and Shadowman. All in all it looks to be a good week to start December.

These three books were being touted as the best of the best by the Cosmic Comix website, so I read them first. All three are excellent and the rest of the books will be hard pressed to be any better. 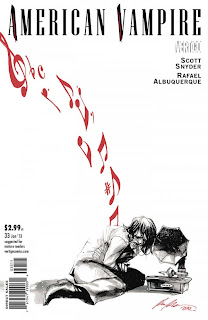 First up is American Vampire #33 by Scott Snyder and Rafael Albuquerque. Not only is Scott DC’s newest and the fastest rising super star, he is becoming the “go to” guy for so many things. He writes Batman which is setting all sorts of records for sales, he has brought in two new writers for DC, he is teaming up with Jeff Lemire for Rotworld and he is teaming up with Jim Lee to give us a new Superman book. The guy is on fire and is a superb writer. With all of that in many, many ways this is still his best work. At the same time Rafael Albuquerque has grown up on this book from a pure super hero artist on Blue Beetle, to an artist who can do this dramatic horror title with great skill. This issue brings to close the Blacklist story and from page one to the end of the book it is impossible to put down. The pace is relentless and Scott is a true master of knowing when to shut up and let the art tell the story. The tragic ending of Henry was something that was destined as he was never going to allow himself to turn into a Vampire. Even with knowing the ending the sorrow and emotion of Pearl was palatable as you read the book. American Vampire is a book that I order the hard covers even with reading and getting the regular book. This is a seminal work for Scott Snyder, who looks like he will be building a lot of seminal runs on many books over the years. A great issue in what is a great series. 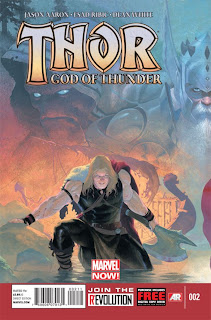 Next up is Thor God of Thunder #2 by Jason Aaron and Esad Ribic. I have read many different versions of Thor over the years and there are some great runs on the book, but lately I passed on the title and was underwhelmed by the handling of the book when I read it. Jason Aaron has hit a freaking out of the park home run with his start on this title and it is blessed to have Esad Ribic doing the art. Esad is doing some of his finest artwork to date on this series. Last issue set up the three Thor(s) idea. One Thor is from a millennium in the past, one today and one in a far flung future. Each is fighting the god killer. Instead of hitting every single time, every single issue Jason is allowing the story to flow and this issue was mainly about the past Thor. He is with his Viking worshippers and off to hunt the slayer of gods. He lands in Russia and while his friends attacks the Slavs, Thor goes to find out why only a flying horse covered in blood showed up instead of the Slavs gods. He battles head to head with the god slayer and the meeting does not go well. Thor appears to be defeated at the end and lucky to still be alive. The art work is fantastic, not only is it telling the story but it has a great feel to it. The color artist Ive Svorcina deserves credited with crafting just the right palettes for each segment of the storyline. The basic idea of this series is brilliant as Jason promises that all three version of Thor will continue to be part of the book going forward. It adds a terrific element to the book and emphasizing the idea that Thor’s perceptions of all things will be vastly different given his immortal nature. There was one part during the battle where Thor is narrating a story from further in the past that hurt the flow of the actual action. It was a nice addition is some ways, yet at the same time it was not needed for the story. I think in this case Aaron needed to let the art tell the story. It was a minor flaw it what is a fantastic take on Thor and a book that will be on the top of my reading list. I think Aaron has found a super hero book made for him. 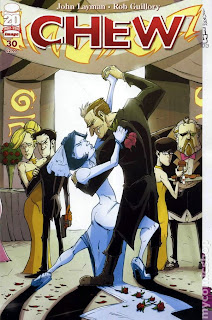 The last book for Part 1 is Chew #30 by John Layman and Rob Guillory. We have hit the halfway point and for a story line that I thought was a little too blah and just chugging along, boy did that all change. I’m worried that any reader of the book who has not read this issue will not want the surprises ruined, so let’s just say the turn of events this issue were jaw dropping and flat out shocking as all get out. We have hit the halfway point of the series and man I’m primed to see the rest of this book to the finish. I swear John Layman was lulling us to sleep all to set up the shocker in this issue. Still the pacing of Space Cakes was poor with the one issue released months before (I believe #27 in a fun stunt) and the Poyo special the rhythm of the book was lost. This issue puts it back on track. Chew is another great series and John Layman is proving that he can write anything between this, Mars Attacks and Detective. DC needs to sign this guy up and give him a couple more books to write.
So we have three great books and possibly the best of the week already covered.
Part 2 is coming later today.
Posted by Jim at Monday, December 03, 2012