A total lark, this one.  I've read various parts of Peter David's long run on The Incredible Hulk and even had a quite a bit of it in singles until I sold some and gave away the rest.  None of that was during the grey Hulk years, so when I saw this book I gave it a try.  It was worth the time. 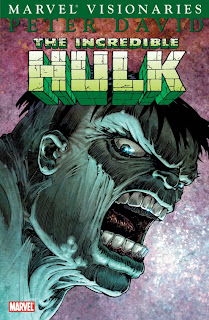 Originally published in '88 and '89, the volume contains The Web of Spider-man 44, Incredible Hulk 349-354, and Fantastic Four 320.  The Fantastic Four issue was written by Steve Englehart rather than David, so there's a little bit of false adverstising to the title, but the issue's necessary to continue a story started in The Incredible Hulk, so there you go.

Pencils in all The Incredible Hulk issues are by Jeff Purves.  Alex Saviuk does the job in Web of Spider-man and Keith Pollard in Fantastic Four.  None of them were terribly familiar to me.  Purves has a style that reminds me a lot of John Romita Jr.  In fact, if I didn't have the credits, I would have guessed it was Romita.  That works for me.  I always liked Romita's work.  Saviuk's work reminds me of Sal Buscema and Pollard's is all his own, though nothing particularly distinctive.

The first four issues of this collection are pretty standard Marvel stuff, at least as I recall it.  In the first two Spider-man crosses over into the Hulk's book for a fight against some cyborg mercenaries who are having their annual fight amongst themselves for possession of some amulet that gives them more power.  The grey Hulk is intelligent and amoral.  He also stays in Hulk form without having to be raging like the green guy, which means Banner is exiled most of the time.  In the second two Doctor Doom manipulates Hulk into a fight with the Thing.  Nothing terribly original any any of that.  Mostly its the fun of reading this iteration of the Hulk that's fun.

And, can I just say that this permutation of the Fantastic Four was a mystery to me.  Ok, Human Torch and the Thing are there, but Reed and Sue are gone.  The Thing is craggier than usual for some reason.  There's a not craggy, female version of the Thing that's a member of the team, and who appears to be his love interest.  The Thing's long-time girlfriend, Alicia, is dating Johnny (which I sort of remember), and Crystal of the Inhumans is back on the team again.  I don't remember a thing about a female version of the Thing.

The rest of the way's a bit mysterious, too.  Hulk appears to take a trip to Jarella's World, the microscopic universe where the green Hulk had intelligence, married the queen of the place (Jarella) and lead a rather happy existence.  Except it looks to me like the whole thing is a dream.  A really long dream because Hulk, known in Las Vegas where he lives as Joe Fixit, is missing for a few days.  In Jarella's world there's sectarian warfare between various groups who worship Hulk as a god.  One of them manipulates Hulk into toppling their main enemy so they can rule, then send him back to Las Vegas.

But the Hulk doesn't exactly make it back to Vegas.  Banner is the one who wakes up in Fixit's bed.  The remaining issues are about the ongoing conflict between Banner and Fixit for control of their shared space, without blowing Fixit's relationship with a woman named Marlo or upsetting his job as an enforcer for a local mob boss, whose being targeted by out of town mobs.

Lurking through the last few issues is a guy who can take people's desires/dreams and make the people believe they're experiencing them as a reality.  A down on his luck slot machine junkie thinks he's won a jackpot.  An elderly couple who've been married 53 years and are worn out on each other think they're young and attractive to one another again (a pretty facile view of a long marriage, by the way).  I've no idea who he is.  He doesn't wear a costume.  In fact, he dresses really badly, even for that era.  Striped shorts and a floral shirt?  Even Vegas denizens might view that as offensive.

While this was a fun read, bringing back some memories of my Marvel reading days of yore, it also reminded me of why I stopped.  There's too many stray threads that require more and more overlapping purchases to follow.  At the very least I would have liked to have known who the dream guy was before the volume came to an end.  Is that too much to ask?
Posted by Thomm at Friday, December 21, 2012