The independent publishers actually dominate most of my list. Take out the Vertigo and Before Watchmen stuff from DC and I bet almost every week that I get more from the other segment then I do with the big two. 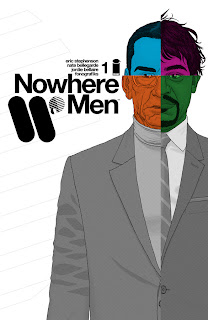 The first of the three is Nowhere Men #1 by Eric Stephenson and Nate Bellegarde. I enjoy picking up various new series and giving them a try and this book was very reminiscent of what I call “The Lost” school of writing. It stems from the TV show where mysteries and ideas are strewn about and one wonders if or when they will ever be explained. Given my contempt for Lost and the way it ended I have little patience for the mysteries to be revealed. Nick Spencer is notorious with his ability to do this and I wonder why I followed Morning Glories for so long. Anyway this book is about four scientists who band together to open up the next great corporation called World Corp. We open with them walking out to a press conference and then have a two page spread giving us their backgrounds as a magazine article. Next is a two page spread that says years later and some monster is killing off AIM rejects. We jump to the boardroom as the three members who are left (is the other guy dead or what?) and they are arguing over where the company is going as the monster is their product. We get an ethics argument of a sort and we see the company founders are now at odds with each other. It appears to be many years in the future as they are portrayed to be fifty plus or more years old. The next jump is an abrupt shift to a space station where a virus has broken out and the group here is being told no one gets off as they are now quarantined. At the end we get a two page newspaper interview with the World Corp member who had quit. The timeframe that this occurred in is ambiguous. It is also unclear how any of this stuff ties together and what the f**k is going on. I mean if these guys had been together so long why is it just now that they are falling about? Simon, the guy who wants to keep the monster for profit, must have shown this type of morality for many years. Then, what the heck is this space station thing and how does that tie into everything. The most important credit missing from many new independent books is the editor. I will hang out for another issue or two as I know a lot of writers take time to pull their premise together, but I swear a good editor could help get these guys to craft better first issues. Most readers are not as easy going as I am to hang out for more than issue #1. It seems to me that a solid editor is missing from in books all over the place. Hell I wish I had an editor to review my work and help make it better. As a self editor I can tell you I miss way too much and think that a good editor could vastly improve my work. 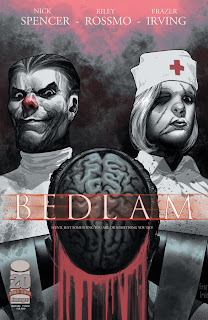 Speaking of hanging out and giving books a chance I’m back for issue #2 of Bedlam by Nick Spencer and Riley Rossmo.  I choose this book strictly because it has many of the flaws of Nowhere Men, but when I choose it as one to review I had no clue I was getting Bedlam #1 in Nowhere Men. The net result is that these two reviews have a similar complaint. Hire an editor. Hell I’ll help for free and take a cut on the back end, a small percentage of the gross (never make deals for net profits). Bedlam has Riley Rossmo’s art going for it. I love his work. It has a scratchy quality to it that is unique. His story telling gets better and better and anyone who follows him knows he has to be struggling with some of the most obtuse writers to ever come down the pike. This book is of course by the infamous (to me) Nick Spencer who seems to love the mystery portion of his ideas. He tantalizes you with some neat concepts and some cool moments but often never delivers the answers to all the damn questions. If it was not for Rossmo I would drop the book, as it is I’m on for one more issue. I will not make the Morning Glories mistake of continued hope of an explanation of anything. A small aside is how the book touts Frazer Irving in the credits. Frazer does very cool work, but no one else puts up the name of a cover artist like he is part of the interior work. It feels cheap and like false advertising. Bedlam has mysteries all over the place and murders and gore, secrets within secrets and questions as to who is who. The book could be a great story, but I have no faith the promise will be delivered on. I will get issue #3 in the hopes that it starts to come together, but if I’m still wondering about everything at that point I will drop the title. 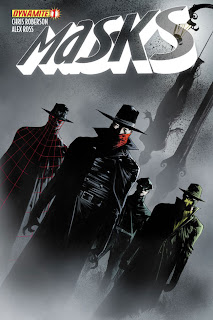 The third book is Masks #1 by Chris Roberson and Alex Ross. I have not seen Alex do interiors on a book for a look time. His photo realistic style is Neal Adams taken to the nth degree. At times his work is amazing and the quality is always there. Other times the book looks like a series of still pictures. I know, all comics are, but most artists imbue a sense of a flow to the art and some feeling of movement. You believe the characters are real. Often Alex’s work, while pure artistic skill wise is great, can look like a photo of action figures posed to do a scene. The story itself is very good and apparently “borrowed” from the pulp novel call The Spider vs The Empire State. I added it to my Amazon wish list if someone wants to buy the book for me. Anyway Roberson has taken the idea and used it as a springboard to pull all of these heroes together. The basic premise is pre-WWII New York is overtaken by the Justice party who are criminals and crooks. They have passed laws and turned the city and state into a police state. I enjoy the naming of the political party as the Justice party, because like many of our laws today the naming is made to sell the idea regardless of what the bill actually does or does not do (See the unpatriotic Patriot Act as a prime example). The Orwellian nature of our government is frightening at times. In this series our heroes have to fight for justice, but that means defying the unjust law. It has a good feel to it and I look forward to the rest of the series.