Marvel NOW versus DC’s The NEW 52


Whew!  What a week.  I’ve had middle school and high school concerts to attend three nights in a row.  If you’ve got kids that age then you know most of those performances aren’t very short (although the band one last night clocked in perfectly at an hour). The worst was actually the non-stop treble choir rehearsals and then they cut 50% of the songs (from two to one)!!!  I only got to read one new comic so far this week (Fantastic Four #2) and it’s already time to prepare the next post (I’m trying really hard to finish them before Friday now, so the weekend can actually be totally relaxing – as much as possible with six children in the house).  Anyway, I thought this would be a good opportunity to weigh in on the new Marvel NOW relaunch and why I think it beats DC’s The New 52 hands down.

Round One: Renumbering versus Rebooting

We all know that DC totally rebooted its universe for The New 52.  Well, almost totally.  As Jim mentioned several times, placing the reader five years into the new history was often confusing and occasionally contradictory.  I was initially drawn to the new universe, because I hadn’t been following too many DC titles for a while and I was hopeful that this would be a great starting point.  (I was onboard for the initial post-Crisis DCU and it was very accessible and very good.)

Unfortunately, I think DC didn’t have enough planning going in and total creative changes early on for some titles (Superman) really hurt the flow.  It was kind of like they were making it up as they went along (with apologies to Indiana Jones).  I’m not sure the promise of uninterrupted publication was met either.  Still there are some outstanding titles out there (Batman, Swamp Thing & Supergirl) and the second year titles or changes (World’s Finest, Firestorm & Detective) seem to be a step in the right direction. I suppose one plus is that they’re quick to make changes when something isn’t working, but it really kills the reader’s investment in a book (Although I did well selling some of them on ebay).  I’m still bummed that they cancelled OMAC and then shoehorned him into a bunch of books as a guest star.  (Man, I should’ve tried to get the #0 issue chapter during my store’s 40% off sale!!!)

[I can’t believe I’m reduced to using my laptop in the high school hallway while waiting for tonight’s concert to begin.  Is it dedication or just plain pathetic???  Needless to say, if I don’t finish this in the next hour, we just might have a “to be continued”…at least it’s quiet…]

Marvel on the other hand just renumbered their titles and changed creative teams.  The universe is building on the same history that’s been going on for years.  I pretty much skipped the Bendis-era Avengers and the various tie-ins, but remarkably the relaunch still seems fresh.  The storyline changes appear to be more purposeful too.  So, the continuity still exists (good for back issue trade sales), but you can still just jump on the new bandwagon.  You also don’t have to worry about the characters not being the same characters you know and love.

I would’ve thought rebooting was the wiser move, but it disenfranchises those who really loved the old stories and characters (I’m talking about the Wally West fans here).  It’s hard to accept that a whole universe simply ceased to exist, if it ever did.  No, Marvel definitely wins this round.  It helps that the stories have been really top notch and interesting.

Unless your name happens to rhyme with gem, you probably had to pick and choose which of the 52 titles to try out.  Who is going to seriously buy them all long term?  It’s a bit overwhelming and budget crushing.  DC threw everything against the wall and waited to see what would stick and what would just leave a sticky grease spot residue.

I don’t know how many titles Marvel is going to publish under NOW, but the gradual release of books makes the onslaught much more subtle.  Even more effective is the fact that the first round of books are essentially on a bi-weekly schedule or better (without any downgrade in quality [i.e. fill-ins].)  Iron Man #4 comes out next week already!!!  It’s insane and super budget crushing, but it’s also like being a frog in a pan of water – you don’t realize how much you’re in deep until it’s too late when the water starts to boil or the debit card statement comes out.  One of the books I’ve been enjoying the most is All-New X-men.  Every issue has been great and I’m eagerly anticipating the next one, but rather than letting my enthusiasm wane – out comes another chapter.  At this rate, they might as well release the arcs as trades to begin with.  Actually, this is better, because it keeps you coming back week after week; another installment of your new favorite side-by-side with a new title to try.  It’s downright brilliant!

Marvel wins again!  Of course, they had the benefit of analyzing what DC did and making sure they didn’t make the same mistakes.

I honestly don’t remember the variants for the DC books, but that’s probably because they were too expensive to consider getting.  On the other hand Marvel’s idea of developing a consistent theme of variants (Scottie Young “Babies” and Deadpool) that were the same price as the regular book has been outstanding.  I want to get some of them just for the cover (like Cable, but I resisted the temptation).  I was super bummed that I missed out getting the FF and Hulk variants from my store.  I may end up selling some of them later on ebay, but I’d likely get a better price for them.

SLAM! BANG! Marvel ends the bout with a KO!!! [And the crowd roars in applause – no the concert hasn’t started yet…]

I actually think the Marvel stories are more interesting so far.  However, I reserve the right to drop out of some titles.  Hulk, Captain America, and Avengers are tentative right now. I’ll be able to decide next week when the second issues come out to see if I want to continue.

The Marvel preview books have helped too.  There are still a lot of upcoming titles that look really good.  By the time they come out I’ll already be committed to the first wave.  Marvel must be crushing in sales right now.  Oh, here’s my theory for the “NOW” name.  “When does the next issue of [insert title here] come out?”  “NOW!”

I’m sure there are other rounds or arguments either for or against the two approaches, but that’s good enough for…uhmm…you know…  Have a different opinion?  Feel free to comment and make your case.  Bottom line the readers are the real winners.  There is a lot of great material out there currently and not just in the Big Two. 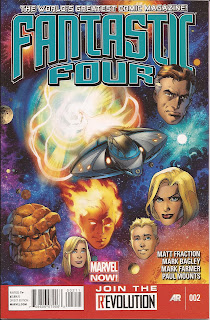 Hey, I’ve actually got a few minutes to spare (prior to proofing)!  So, let me throw some love at Fantastic Four #2.  I liked it much better than the first issue.  For one thing, it really seemed like part three of the FF series.  The two titles have flowed seamlessly together so far.  That’ll change when the Fab Four plus Two go to parts unknown, but that’s okay, because I’m really more interested in the Ant Man, She-Hulk, Medusa, and Darla team. What on earth are they going to do with Darla, who I’m surmising is a Lady Gaga type?  The Thing saying goodbye to Yancy Street was cool.  He certainly knows that Reed’s plans don’t usually work out perfectly, especially for him.  His interaction with Shulkie was fascinating too.  Was Jennifer flirting with him?  The ending was perfect with Ant Man counting down the four minutes.  I’m excited to find out what the stand-by team will do when the original team doesn’t come back right away.  Luckily, I’ll find out on Wednesday with FF #2.

NOW if only I could afford more titles…
Posted by Matthew at Saturday, December 15, 2012