I was only going to do a two part review this week and just have notes on every other book that I read, but these seven books deserve a little more than a quick quip about them. It has been an amazing few weeks of comics with so many excellent books and these certainly fit in that category. 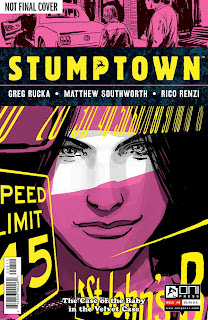 Stumptown #4 by Greg Rucka and Matt Southworth was an astonishing issue. I’m a big Greg Rucka fan and love this series, but for me the first mini-series was better. This series while very good was not as good and then we got this issue. It is a car chase done as a comic book and it works. Now I will give Greg all the kudos in the world for creating a great character in Dex Parios. I’m ready for the TV series and want to be involved in the casting of Dex as we will need the right person to pull her character off. All that being said the comic was ruled by the art work. No one is ever going to mistake Matt Southworth for Ivan Reis or Byran Hitch, two of today’s bigger super hero art stars, but I don’t think either one of them could have pulled off making a car chase exciting in a comic book. The page layouts, the blurring of the art, superimposing an old style speedometer over the art, design, expressions the whole nine yards was flat out fantastic. Years ago a movie “Bullitt” (yeah I’m old) pulled off a great car chase scene and it is clear the Matt Southworth used it for an inspiration. You can click the link to compare. I’m not trying to take anything away from Matt’s work, I’m pointing out what appears to be an influence or inspiration for the car chase. What Matt has done is almost the impossible and this is made an exciting car chase depicted in still pictures. A simply amazing accomplishment and makes me look forward to see how the whole thing wraps up next issue.

Actually, I didn't think of Bullitt while working on the chase (haven't ever seen the movie, though I've seen the car chase years ago), but it's bound to have been an influence. I deliberately didn't watch any chase sequences while working on it, though my favorite chase is probably Tarantino's DEATH PROOF, so that and others were undoubtedly in my head.

Stumptown is indeed a series of minis, and this arc is ending with issue 5. We haven't talked yet about what we're doing for the next one...

Jim: Thought we should add this to the body of the post - as Matthew clears up my impression with the facts. Thanks Matthew. 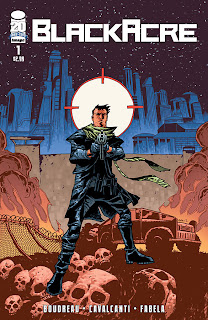 Blackacre #1 by Duffy Boudreau and Antonio Fabela from Image comics was a nice start. This is one of the best first issues under the image banner in awhile. Many of the Image first issues are intriguing but they are too mystery laden or they fail to set the premise for the series in just one issue. This book contains an interesting credit which I believe maybe a difference and that is an edits by Rich Amtower. Now I still have an issue with how the setting was introduced but by the end of the book you know the setting, the main character and have a clear storyline. Blackacre is a city that was put together by a group of super rich elites (the 1% I guess). As the rest of the US falls apart this city is an oasis and has created its own prison or fortress against the rest of a declining America. The setting is established by a professor in 2202 talking about the past. This means Blackacre ultimately leads to a more utopian style future where suit and ties are still de rigueur for lecturing professors. I think this is a minor problem because the setting did not have to be done this way. You have made a story about a dystopian future and then set it in the past that in a sense can limited what you can do in your setting. With the setting established we meet our central character Hull. He is a true believer in Blackacre and retiring from being a guard on the wall. He is recruited to go find his friend from childhood who has been gone for three years on a mission to the outlying lands. What Hull does not know about his mission is his tracker, which is to used recall him to the city, is a bomb as the city authorities want Green killed. It is a great start and sets up either a limited or unlimited series. The art is solid, although at times it was hard to tell Hull from his superior, but it does a good job in telling the story. 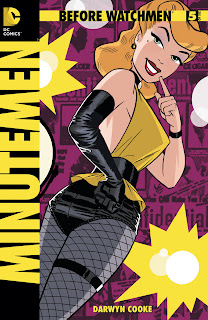 Next up is Before Watchmen Minutemen #5 (of 6) by Darwyn Cooke. I’m such a huge fan of this man’s work. His story telling is superb. He starts with a one page about the adventure, jumps to the future where Hollis is talking to Sally about his book and then goes back to the last great adventure of the Minutemen. In fact it might be the only truly heroic adventure the group has and the hero is an outsider. Darwyn weaves a story about Hollis and his obsession of solving Silhouette’s case into the story of the last adventure of the group before being disbanded by Congress. We get great in depth characterization of Hollis as we see he has been the surrogate father for Laurie (current Silk Specte) from the beginning. We got a great super hero adventure as the Minutemen with help from two new heroes stop a Japanese plot to  irradiate part of New York as revenge for the atomic bombs we dropped on Japan to end WWII. We also get some subtle commentary as the real hero was the new hero Scout. Scout is the son of Bluecoat (the two new guys). Bluecoat was in a Japanese internment camp and was originally part of the plot against the US. At a point he realized that revenge was wrong and the two gave their lives to save a country that turned their back on them. Cooke then moves back to the children being murdered crime that Silhouette died trying to solve. It ends it with Hollis solving the crime by finding out that the Hangman is behind it all. Even with all that I have recapped there is so much more to the story. With Cooke the pictures truly tell much of the story and a thousand words would fail to do it justice. The wrap up of this series in the next book should be great. Darwyn Cooke is a true master story teller and one of the industry’s best writer/artist.

All New X-Men #3 by Brian Bendis, Stuart Immonen and Wade Von Grawbadger continues to impress and shock me. The shocks are, I’m enjoying Bendis on the X-Men, have not run into any dialogue blocks that kill me and with the accelerated publishing schedule the decompressed story telling is working just fine. Of course Marvel has whacked me for $12 retail just to get to the point of Cyclops and young Cyclops having a showdown. When a story is well done and fast paced the price point is not as egregious and I soothe my feeling with a free digital copy and a decent discount from my retailer. This issue focuses on the current Cyclops and his band of fugitives. We find out that the Phoenix force in addition to restarting mutants worldwide has played havoc with their powers. Of course convenient comic book logic allows that only certain mutants were impacted by the force. You can’t press comic book logic, too hard, you just have to accept and move on and enjoy the ride. I’m enjoying this ride.

Next up is Detective Comics #115 by John Layman and Jason Fabok. I have to say it. Scott Snyder and Grant Morrison need to look in the rear view mirror because Mr. Layman is riding right up behind them and is threatening to pass one or both of them. This issue had the die cut cover announcing its entry into “Death of the Family”. I’m not sure John got the memo because it is a seamless story that just continues to build on his last two issues. We get tons of Penguin, a little Joker, lots of Clayface, some plot resolution and a new villain to enter the fray, the Emperor Penguin. At the same time Jason Fabok is knocking the art out of the park. What a great series. Note to DC, please give Mr. Layman as many books as he can write without killing the goose that is laying the golden eggs. If you don’t do it, Marvel will.

Fury Max #7 by Garth Ennis and Goran Parlov proves you can’t keep Ennis away from the Punisher. Nick is back in Viet Nam being given an assassination assignment and needs a wingman who is Frank Castle. Ennis has such a great feeling for these characters and makes them so unapologetic that it is refreshing in its brutal honesty. I think my favorite part of the book is where Fury is ruminating at some distant point in the future about his life and he compares what the US did in Viet Nam against all the other US misadventures in foreign lands. It took an Irish writer nail it to a “T”. The quote “Nam. The greatest American f**k up of all time. Lose sixty thousand of your own killing three million of the locals. Let the Khmer Rouge get in next door. That’s another million right there. Make the guy in the G.I. lid, everyone’s savior from WWII, make him a rapist and a butcher in the eyes of the world and still lose.” That sums it up.

And the last of the magnificent seven is Colder #2 by Paul Tobin and Juan Ferreyra. This book should not be equated with Chico, as it is a very strong book and not just tagging along to prove its manhood. Colder is a great horror story and the first issue set up the characters and this issue tells us what the heck is going on. Ferreyra’s art is just terrific. The oddball character that has to be both comical and menacing is pulled off to perfection. The scenes as Declan pulls Reece into the madness to show her the other world are well done. Getting horror in a comic is a tough job and Tobin with Juan has made it work. Tobin is building up the characters and making us care about them, especially Reece, Declan former car taker. She is our point of view character and we are both learning about the insanity that surround Declan and the mysterious man chasing him.

Part 3 will be up tomorrow later in the day. As this post ran longer then I thought, I figured it should get its own 24 hours as top dog.
Posted by Jim at Monday, December 10, 2012