There's something to be said for walking into a comic book store.  I find a lot of interesting things on the cheap that way.  Take Matt Howarth's The Downsized, for instance.  I'm walking through the store on Halloween when I see stacks of various books at cut rate prices.  This book originally $7, is at $2.  Howarth's name is somehow familiar, but even with subsequent research I can't figure out why.  But for $2, why not? 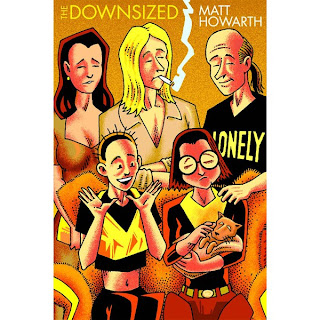 Roland and Stevie are back in Michigan for Roland's parents' 50th wedding anniversary.  The town isn't specified, but it must be near Flint, as the closing of the GM plant in Flint is mentioned several times.  Pauline still lives there, working for a temp agency, though not working very often and not working very happily.  She has a feeble cat named Leia (Roland and Pauline met at a Star Wars convention) that is paralyzed and needs frequent care.

Eddie is Roland's cousin, married to Joy.  They have teenage kids and live largely, though not well, off of Eddie's job sellling his home grown marijuana.  Roland's sister, Kay, is the mayor of a tiny town in Alaska, and the closest thing to respectable in the bunch.  Eddie's brother, Ted, fixes cars out of his van.  He's a sort of off the books AAA in DC.  He met his wife that way, and she's along for the big event, too.

If you're looking for action, this isn't your book.  If you're looking for interesting, often pathetic, conversation, this is the read for you.  These people are all sad sacks, with the exception of Kay and her live in bear of a boyfriend.  They managed to break the shower in their hotel room, in the only way one should break a hotel shower.  The rest are just scraping by, largely below the radar, and largely unhappily.

Roland wants to be a succesful writer, but he also wants to get back together with Pauline, who broke up with him years ago to define her own life, but instead just got a cat to replace him.  Eddie can't make money enough to live well even selling a high demand product.  Stevie has no particular aim other than wanting to get laid.  In fact, she's a virgin who is just hoping to meet a nice one night stand, as she has a tendency to become a wallflower when not with friends.  Ted's pretty close to living in a van down by the river.  In the end, there's a small measure of happiness for a few of them, no change at all for most of them, and a large amount of sadness at the sudden, unexpected death of one of their group, who died dreams unfulfilled.

I had a bit of a time figuring out when this was all set.  No cell phones are in evidence, and in fact a couple of the characters can't be found when the tragedy occurs, with no one mentioning even trying a cell phone to reach them.  If I had to hazard a guess, I'd say it's in the '80s because some of the characters were in high school in the late '60s.  The closure of a plant in Flint indicates the '80s, too.

Regardless, it's a well told story of small lives, lived in the shadow of modest dreams that went largely unfulfilled.  It's a lot more fun than that sounds because of the dialog Howarth uses for his cast.  They're pathetic, but they're funny.  As a bonus, Howarth throws in some small funny touches such as Roland's T shirts changing slogans to provide biting commentary on his life.
Posted by Thomm at Thursday, December 06, 2012