Congratulations to BPRD with what has to be the longest title ever for a book. So for the rest of the week in review I have slipped in a semi-review of a book from December 26 with Amazing Spider-Man #700 and have a few brief solo reviews for the last day of 2012. Normally I get into the doldrums with comics during the end of the year and through the first couple months. Maybe it was winter and not the comics. This year I’m in Florida and the last couple months have been great. So with that as the introduction let’s get into BPRD. 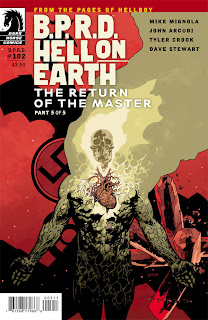 BPRD #102 by writers Mike Mignola and John Arcudi with art by Tyler Crook and Colors by Dave Stewart was f**king awesome. I love BPRD but I also confess that the series has felt like it was just sort of meandering around. Since the end of the Plague of Frogs the whole Hell on Earth has been almost a stroll in the park. We have been introducing an expanded cast, we have had adventures in different parts of the world and we have seen BPRD become a UN organization. It has been decent but the cast is large, the story has seemed to have no real core to it. That all changed with this issue and we got to see what Hell on Earth is all about. It is all Hell breaking loose on earth.

It was such a revelation, the series felt like it was treading water and now it exploded. The Black Flame returns and then we switch scenes and see New York have explosions, Utah, Moscow and everywhere we see huge monsters come up out of the earth. Devastation is everywhere. We cut to an EMT and you are wondering why we are checking in on this particular crew. They are trying to keep a young girl alive Liz Sherman. We get glimpses of a bunch of cast members, but what makes a huge impact is that we literally have Hell on Earth.

What had been almost a sleepy series has now been kicked up to a game changing book. Sadly we do not get back to how the heck does BPRD try and save the world until May. If you have not been following BPRD and thought it was too dense and hard to get into the book, I would suggest jumping on with the next issue in May as all you need to know is Earth is overrun with monsters and the sh*t has hit the fan.

An enjoyable series has just gotten better.
Posted by Jim at Monday, December 31, 2012