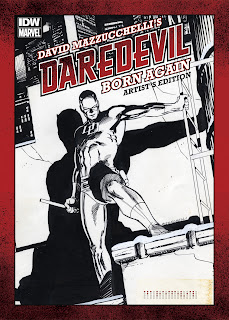 Of late I have been very negative towards a passion that I have had for over fifty years. The advent of the new DCU has annoyed me to no end and the while some of the Marvel books have some passion and creative vision they ultimately have been lackluster. From seeing all the DCU turned into 20 somethings to seeing Daredevil being taken down by a revised Bullseye as a mastermind of cunning, it has been disappointing. I wanted to read something that I knew was a great story, so I finally sat down and read Born Again by Frank Miller and David Mazzucchelli. Not just any reprint, but the Artist Edition.

It is an amazing story and done in this format it is finally given justice. It is more amazing since the story was being produced as a monthly book. It is one of the best stories ever done in comic books. Yes we have Dark Knight Returns, Watchmen and many other great stories that have been told, but after re-reading this in the artist edition I think this has to be one of the best stories ever done, arguably the best.

The problem is that if you read the collected editions you miss the full impact that the art delivers. While Mazzucchelli was still learning his craft the combination of Miller and him producing the book brought out the best in both of them. All the line work is Mazz’s but the designs have a lot to do with Frank. In the introduction Miller and Mazz agreed that neither would take a writer or artist credit as each played into each other as the book was produced.

The story is a powerful one starts as Daredevil’s ex-girl friend is selling his name to a pusher for a fix. The name travels up the criminal world until Kingpin gets his hand on it. Kingpin’s master plan takes Matt Murdock apart by destroying his life with witness tampering charges, IRS audits and the like. Matt who was already stressed out is now being pushed past the point of no return. Matt is disbarred and essentially broke. The Kingpin has won plain and simple and the best part is Matt can’t even find out that the Kingpin is behind it. Of course the Kingpin can’t be satisfied with just that and he blows up Matt’s home, which makes Matt realize it is the Kingpin.

Instead of a Rocky montage of scenes of Matt rebuilding we see Matt go after the Kingpin in the next chapter and he is beaten to a pulp, thrown in a taxi cab and dropped in the river. The problem for the Kingpin is that Matt survives and drags his ass out of the cab.

From there the story sees Matt regaining his health and sanity with the help of a nun who Matt figures out is his mother regardless of her denials. We have the story of Karen Page his ex-girl friend struggling to get back to and find Matt as she needs saving. We have the story of the reporter Ben Urich who gets beaten by the Kingpin and his fight for redemption. We even get a story about Captain and his fight against his own government and a sort of redemption. The story ends with Matt not taking down the Kingpin but at least exposing him for what he is and greatly reducing his influence.

The story is issue by issue one of great emotional power. A man is stripped of everything and finds himself at the end of his rope and yet still will not stay down. He regains his faith in himself and takes a path back into rebuilding is life. The action is great, the artwork is breathtaking. And with all of that it is not 100% perfect; to me it felt like the story wrapped up a little quick. I’m sure if I was more predisposed to do a bunch of research I could find more background material on the story but I want to talk about what I read and how it made me feel.

This story made me understand again why I love comics. It is because I love stories about heroes that do the right thing no matter what. I love stories about heroes who fight on against all the odds and who believe in things like right and wrong no matter what the government says. This story had the same type of power that Amazing Spider-Man #31-#33 had when Peter Parker fought Doctor Octopus and was triumphant even though it cost him personally. That reminds me that it is a travesty in many ways that we have Superior Spider-Man. Oh I’m enjoying the book, but it is only because we can’t have true growth.

My personally philosophy is emphasized in these type of stories and was probably molded by these type of comic book stories. I’m known to be a rule breaker and in my view right and wrong are not a set of absolutes by a situational thing. I need to context to make a right or wrong determination. I hate zero tolerance as it means zero thought. The circumstances are all important. I’d rather die on my principals then have to sacrifice all that I feel I am to continue my existence. Born Again makes me feel alive as I live and breath with Matt as his life is stripped away and after all his possessions and his job are taken away he still finds himself and realizes no one can beat you as long as you remain yourself. I will get back up and continue to fight until my last breath. It has that type of impact. I could be happy if that was the last Matt Murdock Daredevil story ever told.

That echoes what Mazzucchelli’s introduction had to say about Frank Miller, when he said he was happy to never write Daredevil again after his last issue when he had DD pointing a gun at Bullseye in his hospital bed. This is the big flaw in never ending story telling and where the comic companies get it wrong. There is nothing wrong with Matt Murdock stepping off the stage and someone else becoming Daredevil. The Fantastic Four can be Valerie Richards, Franklin Richards, Johnny Storm and Ben Grimm or some other combination. The staleness that comes from the never ending saga makes Potto a cool thing, but in my reality it is an abomination against the very nature of what makes a hero a hero.

The worse part of re-reading this and in this format is it makes so much of the current stuff pedestrian. Nothing I’m reading in comic books right now stirs that type of passion. It also make me mad about the reproduction of many collections, they need to be done better and given the care and production values the stories deserve. Too often it is print it and bind with glue and ship it out. The love and care in this book is evident.

I have included some pictures to show you why the Artist Edition is the best presentation of this story you could ask for and if you buy just one high end book it should be this one. The full power and impact and Mazz’s art and Miller’s story is not felt without reading the story in this format.

Note the comments section seems to be only semi-working - so feel free to email comments to jmartin1955@gmail.com and I will add to the post later on.

Matthew here, Jim said I could post my comments directly, so here's the first volley:


I certainly agree that this is one of the best comic stores of all time, and certainly the best Daredevil one with the new "Angels Unaware"  currently vying for second place for me.  I too have the Artist Edition (my first ever) and it was a "no brainer" to pick it up.  It's a signature work and definitely deserves to be preserved this way.  One of my favorite aspects of the art were the repeated title splash pages, usually with someone in a lying position in plan view. 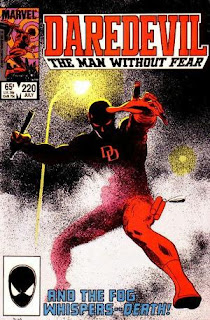 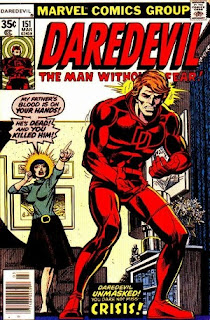 It still reads great as a stand-alone arc, but I was fortunate enough to be buying the single issues when they came out in 1985/1986 when I was 15/16 years old.  However, I wasn't just picking it up because of this one story, I had been reading Denny O'Neil's and Mazz's work on the title since around issue #210 (approximately a year-and-a-half before).  The full glory of David's art was not realized until about a year later, and that occurred somewhere around #220 or #221.  I'm not sure those issues have ever been reprinted, but a least they included #226 (in the back) of the MPE hardcover (a pretty good substitute if you can't have the Artist Edition or the original issues).  One of those issues featured the suicide of Matt's girlfriend Heather Glenn .  This was an important element of Matt's fragile emotional state at the beginning of Born Again.  In real life you don't just jump in at a random starting point, how you react is influenced by what you've experienced/learned beforehand.  In comics we call this "continuity". (And I think it's important or at least it used to be in the Marvel Universe until Onslaught!)

Like a TV series you've already watched during its initial run, you can't quite capture the full level of excitement that you experienced during the monthly installment days -- even for this arc.  It was so cool to be reading when it wasn't known as Born Again, it was just the latest issue of Daredevil.

I've got lots more I'd like (hope) to say sometime -- let's just say this post could continue to get longer in the future.
Posted by Jim at Monday, July 29, 2013