Indies Preview of September Part 1 of 2

Lee: Another month, another huge stack of indies. Ok, not as huge as usual but still plenty of good stuff. And, with only one exception, all the books are affordable this month. That’s something new too!
Thomm: I’m just dying to see what the meaning of affordable is in the Lee cosmos. 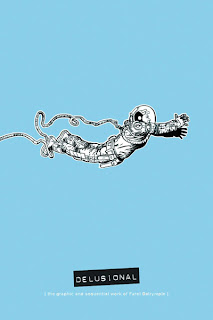 Adhouse Books
Delusional HC by (w/a/c) Farel Dalrymple
Delusional is a book of comics and drawings by cartoonist Farel Dalrymple. You might have seen them in various anthologies, or posted on the internets, but now they are collected into one beautiful tome. Farel's previous work includes Pop Gun War, Omega the Unknown, and the occasional Prophet. 232 pgs, FC, 6x9, $24.95
Lee: Dalrymple is one of the great indie cartoonists and, unfortunately, doesn’t do enough comic book stuff. Pop Gun War was great. Omega was great. His current work on Phophet is great. It’s a little pricey for an entry point but if you haven’t seen Dalrymple’s art you are really missing out.
Thomm: Ok, so this is the not affordable title. I’ll have to take your word for it on whether it’s good. I have no experience of Dalrymple’s work. 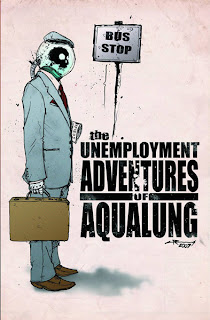 Arcana Studio
Unemployment Adventures of Aqualung GN by (w/a/c) Alex Schumacher
For over 75 years, Agent Aqualung has defended the country from supernatural forces as part of the 88, a covert branch of the Department of Defense. A pink slip and a sealed letter sends shock waves through the covert initiative - they are being permanently dismantled due to budget cuts. Collecting his severance, a new identity, suit, and fake resume, and a small orange tree (which holds the soul of St. Germain, his only friend), Aqualung must adjust to a life in the real world. His first task? Finding gainful employment, of course! With the world against him, or at least a trail of old enemies, Aqualung must navigate through unemployment, dating, oh, and evil plots from ancient gods and their flunkies. The real question is, can he stop them before his unemployment benefits run out? 86 pgs, FC , $14.95 Visit Alex here.
Lee: This sounds great! The image alone of a skull in a fish bowl trying to find a job is great. Can you imagine that application at McDonalds? Schumacher is cartoonier than the cover image but should work well with the material.
Thomm: I sense lots of good humor in this work. Probably should listen to some Jethro Tull while reading, too. 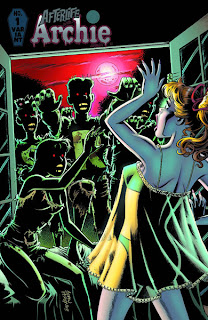 Archie Comic Publications
Afterlife with Archie #1 (Pepoy variant cover)
New Ongoing Series! Escape From Riverdale. This is how the end of the world begins! Harvey Award-winning writer Roberto Aguirre-Sacasa (Archie Meets Glee) and Eisner-winning artist Francesco Francavilla (Batman) take Archie and the gang where they've never been before - to the grave and back! A horrific accident sets off a series of grim events and Sabrina the Teenage Witch must try to repair the unspeakable evil her spell has unleashed. Gasp in horror as Riverdale faces an impending zombie Arch-pocalypse in this brand-new, spine-tingling ongoing series - but be warned, kiddies, this one's not for the faint of heart! $2.99
Lee: Wow! Pepoy is really doing a great job with the retro Archie covers. I love it!
Thomm: I’m going to guess this won’t be reaching Kirkman territory of wholesale slaughter, though I can always hope. 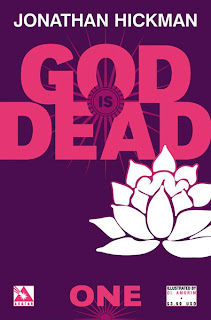 Avatar Press Inc
God is Dead #1 (of 6) by (w) Jonathan Hickman (a) Di Amorim (C) Jonathan Hickman
Like a thunderbolt from heaven, the epic launch issue of GOD IS DEAD is here! East of West and Fantastic Four author JONATHAN HICKMAN launches a fierce new series that stomps where others fear to tread. Mankind has argued over the existence of gods since the dawn of time. In modern eras it's been fashionable to mock religious believers with taunts of scientific testimony and fact. But when the gods of old begin to reappear on earth and claim the domain of man for their own, the world is thrown into a state of utter anarchy. Now Horus walks the streets of Egypt, Zeus has taken over the Sistine Chapel, and Odin is coordinating the dissection of the earth among the returned deities. Mankind held sway over the world for thousands of years and their hubris over that time has made them powerful but when faced with the divine, can mortal weapons put an end to the second coming of the gods? Available with a Regular cover by Jonathan Hickman, End of Days cover by super-star Jacen Burrows, a premium Iconic cover by Burrows that features a card stock cover and is limited to just 5000 copies, and a Pantheon Order Incentive cover by series artist Di Amorim. $3.99
Lee: Ya gotta give to Hickman, he knows how to excite the crowd! I’d be surprised if this doesn’t get protested somewhere for being offensive. Then again, the cover is so over the top I wonder if anyone can take it seriously. Once you get past the title, the story sounds great.
Thomm: The title is kind of weird. It has nothing to do with the content of the book unless the appearance of a bunch of less than omnipotent and omniscient gods is evidence of no all powerful god. No Christian, Jewish or Muslim theology I know says that the existence of minor dieties would be any proof against their god. Anyway, I don’t find the story all that appealing because it seems like a re-run of things I’ve seen already. 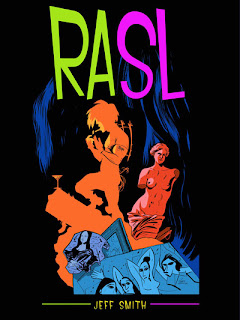 Cartoon Books
Rasl Complete HC by (w/a/c) Jeff Smith
When Rasl, a thief and ex-military engineer, discovers the lost journals of Nikola Tesla, he bridges the gap between modern physics and history's most notorious scientist. But his breakthrough comes at a price. In this twisting tale of violence, intrigue, and betrayal, Rasl finds himself in possession of humankind's greatest and most dangerous secret. New York Times-bestselling author Jeff Smith's follow up to his epic fantasy Bone is a gritty, hard-boiled tale of an inter-dimensional art thief caught between dark government forces and the mysterious powers of the universe itself. 472 page hardcover in full color! 472 pgs, FC, 7.5x10, $39.95
Lee: So this is omnibus version of Rasl. Sheesh, how many times has this been reprinted in all sorts of various sizes and tpb and hc? As for me, I liked the premise and even though the characters were pretty unlikeable I was ok… but the main character is just ugly. I don’t want to read a story with Quasimodo as the lead, just don’t. This is a pass but if you like it then it’s a great collection.
Thomm: I’m not concerned about the Quasimodo appearance, and in fact when you first said he was ugly I was thinking personality until you made the comparison. I think there’s some fancy name for bias against the ugly, but I can’t think of it. Taste isn’t it. Bone’s a great book and this sounds very interesting. I’m more likely to get a non-omnibus edition, though. 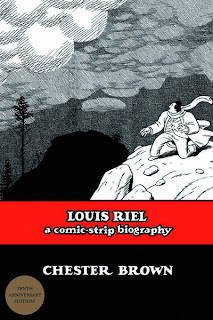 Drawn and Quarterly
Louis Riel: A Comic Strip Biography SC (10th Anniversary edition) by (w/a/c) Chester Brown
To celebrate the tenth anniversary of Louis Riel's publication, Drawn and Quarterly is reissuing the book as a deluxe paperback, with a new introduction contextualizing the work's importance and the original pamphlet covers collected and reproduced in full color. As well, this edition will provide an overview of Brown's creative process and will include rare, never before published panel studies from the work. Louis Riel tells the story of the charismatic, and perhaps mad, nineteenth-century Metis leader whose struggle to win rights for his people led to violent rebellion on the nation's western frontier. Chester Brown's carefully researched, exquisitely illustrated, and much-lauded biography goes deep into the myths and the facts about this man, whose place in Canadian history is troubled.296 pgs, PC, 6x9, $21.95
Lee: I’ve heard about this for a long time. Actually, I’ve read bits and pieces because my store had a copy for the longest time. It’s since disappears and I enjoyed it enough that I regret not getting it. If you like historical fiction you’ll love this.
Thomm: This is right up my alley, despite the blurb not being all that clear and assuming the reader knows things that are left unstated. I’ll have to keep an eye out for this one. 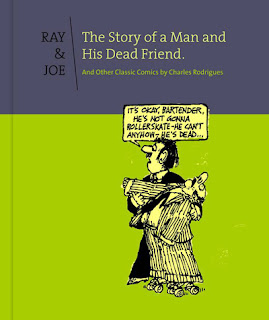 Fantagraphics Books
Ray and Joe: The Story of a Man & His Dead Friend & Other Classic Comics HC by (w/a/c) Charles Rodrigues
The first-ever anthology of National Lampoon cartoonist Charles Rodrigues is a cavalcade of hilarious selfcontained comic strips and serials that boggle the mind and challenge all sense of decency and propriety. Featured are a cast of grotesqueries and naïfs along with biographies of Marilyn Monroe, Abbie Hoffman, Eugene O'Neill, and others. Whilst Charles Rodrigues may be gone and almost forgotten, this collection will rectify at least one of those tragedies. 192 pgs, B-W, 8x10, $29.99 You can read similarly hilarious stories by Rodrigues here.
Lee: Ahh, National Lampoon collections! Ya have to love them. Lampoon pushed the boundaries when it was published and it was almost always very, very funny. I am glad to see this material getting reprinted so a whole new generation can learn the silliness that was National Lampoon. And be assured, Rodrigues’s material was very, very funny.
Thomm: I’m sure it is, but it’s going to be lost on younger readers. Abbie Hoffman and Eugene O’Neill aren’t exactly well known in that age group. I’m not sure a lot of them know who Marilyn Monroe was, but for Madonna and others aping her. Crap, I sound like Jim. 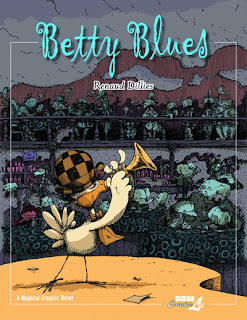 NBM
Betty Blues HC by (w/a/c) Renaud Dillies
Little Rice Duck has built himself quite the reputation around the West Wood, playing his trumpet in bars with their smoky, sweaty ambience, tequila sunrises, and jazz. But between his trumpet and his flame Betty, things are going astray. Betty is drowning her need of him in expensive champagne, something someone else is more than happy to provide - something he'd much prefer, like her, would just stay chilled. By the author of the acclaimed & Eisner-nominated graphic novels Bubbles & Gondola and Abelard. 80 pgs, FC, 8.5x11, $18.99 You can see preview pages here.
Lee: I have the original NBM tpb of this story and loved it. The art is fantastic and the story… moving beyond words. It’s just incredible. The oversized format will showcase the art so this is a must buy for me.
Thomm: I’ve never even heard of it, but the ebullient praise is enough for me. Looks very good, too.

The conclusion tomorrow.
Posted by Lee at Tuesday, July 23, 2013