Superior Foes of Spider-Man #1 – A Review 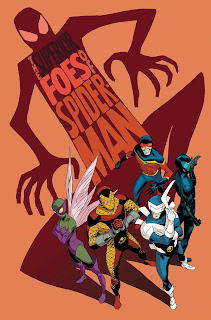 I have sworn off doing a week in review but I have been reading so many positive reviews of Superior Foes of Spider-Man #1 that I have to add my two cents.

It was pedestrian at best; it was a waste of paper at its worst.

First off Nick Spencer (writer)  has failed to impress me with his work at Marvel. I’m starting to think that Nick is never going to be a star writer or that he is perhaps better suited as an indy writer or maybe he would fit better at DC. Bedlam has more pizzazz then any of his work at Marvel. Secret Avengers was horrible and so is this book. When you have the Parker adaptations out by Cooke and you have even Thief of Thieves out on the market, this sad imitation of trying to do a crime book is just not cutting it. It had no caper, it was all set up and none of the characters were appealing. Throwing in Hammerhead crapping in the john and the remarks after were the worse of the worst in playing to the bathroom humor stuff.

Next up is the Marvel habit of just taking a character and throwing out any portrayal of the character that had come before and remaking them in the fashion that the writer wants. Since it has worked so well with Hawkeye, I guess there is no reason to stop now. Bullseye was recently made over as some great mastermind in Daredevil, so why not change up Boomerang. He had been played in a very different fashion in Thunderbolts by Jeff Parker. Of course it doesn’t matter who these characters are, they are all being reworked to fit the story that Spencer wants to tell.

Finally outside of Lieber’s art the book does not even feel like it fits in the Marvel Universe. They are all losers in the book and Boomerang is being set up as the guy with a plan and it starts with him conning his way to getting bail money from his cohorts. I can only imagine that this has garnered so many positive reviews because many fans don’t buy anything not from Marvel or DC. Go out and buy the recent reprinted Scene of the Crime by Brubaker and Lark, Criminal by Brubaker and Phillips, Red Handed by Matt Kindt or get the Parker adaptations by Darwyn Cooke, they are awesome. Leave this tripe on the stands.