The Gettysburg Address: A Graphic Adaptation

This is a bit different.  Well timed, too, considering the 150th anniversary of the battle this year and the 4th of July holiday around which I'm posting this review. 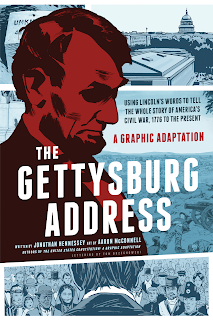 Jonathan Hennessey, writer, and Aaron McConnell, artist, are telling the history of the Civil War using an interesting device.  Oh, the cover blurb oversells it, but it's not too far off.  "Using Lincoln's words to tell the whole story of America's Civil War, 1776 to the present."

What they do is go through the Gettysburg Address in order and in segments to give a broad history of the Civil War, its history, and its aftermath.  It's an interesting concept, and I'm really interested to see what they did with their previous effort, "The United States Constitution: A Graphic Adaptation".  They couldn't have done it the same way because the Constitution is far longer than the Gettysburg Address.

Of course, this work, while broad, doesn't tell the whole story of US History from 1776 to now, even if using the Civil War as fulcrum.  There are a myriad of stories that are Civil War related but aren't a part of this work.  But that's publishers for you.  If you have any interest in US history, this is an excellent read.  The art is especially good.  McConnell captures both the terrible nature of the war and also provides portraits of the many historical figures that are accurate and easily recognizable.

Now, my major quibble with the book is near its beginning.  Hennessey takes "Four score and seven years ago" and posits that Lincoln chose these words as an opening salvo in the contest over states rights.  He argues that Lincoln choose 1776 as the starting point of the nation because that was the date of the Declaration of Independence.  Selecting that date rather than the ratification of the Constitution allowed Lincoln, in Hennessey's argument, to assert that the nation was formed by all of the people of what would be the United States rather than a compact among the states that allowed the states the final say in how the nation operated or even whether it continued as a nation.

I don't find that argument particularly pursuasive.  As much as Hennessey provides direct quotes from historical figures throughout the work to support his contentions, there is no direct quote from Lincoln to show that he believed that 1776 was such a key date in supporting his arguments that the states did not have a unilateral right to seccede from the union.  Furthemore, 1776 had been celebrated throughout the nation as the birthday of the country for a long time.  The Founding Fathers, regardless of whether they were Hamiltonians or Jeffersonians, celebrated 1776 as the birthday for the nation. 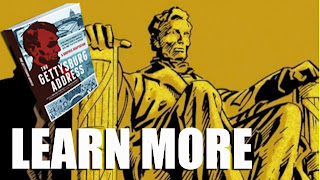 I think Hennessey is trying to create an argument that didn't exist for this opening section of the Address.  The combatants in the Civil War had plenty to argue about, and Hennessey does an excellent job exploring those arguments in the remaining sections, even addressing the Articles of Confederation's failure and the fight between Free Labor and Slave Labor economics that was as much a cause of the dispute as any political or moral argument.  In fact, the political and moral served as cloaks for the economic arguments that were the central dispute.

My minor quibble is the aftermath part of the story.  Hennessey proceeds with the presumption that the forces in favor of a strong central government prevailed.  While that's true it wasn't the end of the argument.  He does address the failure of Reconstruction and the apathy, if not hostility, of northern whites to the plight of blacks under Jim Crow that ran from the late 1800s until after World War II, but he doesn't address the voiciferous revival of states' rights philosophy that is the inaptly named Tea Party movement.  The idea of state superiority over the federal government continues to rear its head, almost inevitably because of the fear of the white male that he's lost or losing his power at the federal level as demographics change.  Which white male has changed and broadened from the WASP of yore to now include all white males, but that same fear of the other has kept states' rights philosophy alive.  Hennessey notes the 13th, 14th and 15th Amendments and how they changed the Constitution but doesn't explicitly state how they undermine the states' rights philosophy.  I'd have liked to have seen that included.
Posted by Thomm at Friday, July 05, 2013