Some Books You May Have Read Last Week 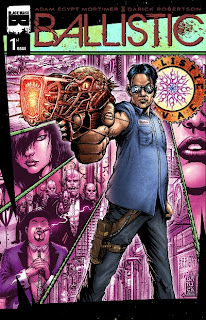 So you may have noticed the publishing schedule is a wee bit erratic these days.  Between summer vacations and Jim taking a break the crew hasn't quite figured it out yet.  Personally, I managed to get a new job (excellent) in a new state (excellent) which means I have been working in one state during the week (not so excellent) and traveling home on weekends (really not so excellent).  The only saving grace is that my LCS owner has graciously allowed me to couch surf his house until I get settled.   Because of that, I have managed to read a ton of books that would never have considered otherwise.

You can see what I thought below the break. 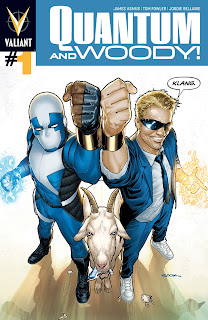 EAST OF WEST #4,
I enjoyed this immensely even though it was terrible as a single issue.  Don't get me wrong, it's a spectacular extended fight scene with a ton of action and a bunch of people dying at the end.  Beautiful art and great execution make this a winner.  As a jumping on point, this sucked!  I had no clue who was who or why anyone was doing anything.  But, it was good enough that I'll get the trade.  If you are an art lover it's worth getting from the stands, otherwise wait for the trade.

HAWKEYE #12,
Is there anyone who isn't reading Hawkeye?   This series continues to rock and roll.  I have the first trade and even ordered the oversized hc collection this is so good.  Each issue is stand alone enough that you can enjoy it without having to know what came before.  This is one of the best books on the stands.

QUANTUM AND WOODY #1, writer: James Asmus Art: Tom Fowler
I really enjoyed this and can't wait to read more.  Asmus managed to capture the feel of the original series (no small feat) and yet, it was different enough to stand on it's own.  It's all setup but it's perfectly executed to leave you wanting more.  Fowler, as always, nailed it on the art.  If you like humorous heroes, or just buddy comics, then this is a winner. 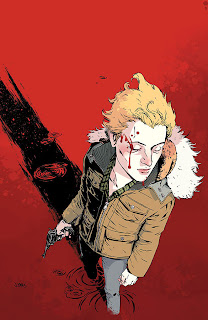 SHELTERED #1, writer: Ed Brisson  art: Johnnie Christmas
This was the only real clunker of the week.  It was fine but something just didn't click for me.  Brisson has the beginnings of a good story but he doesn't spend enough time developing the cast before he starts killing people off.  It's good for the "ooh look dead people" shock but not enough to make me care.  The other problem is Christmas's art.  He doesn't do enough to distinguish the characters particularly when it comes to older and younger features.  The young people are the short ones... that's not enough to hook me.

SIX GUN GORILLA #2 (OF 6),
This was very good and very strange.  I'm not 100% sure what's going on but I enjoyed it enough to want to read more!  Other writers should take note of how this issued was handled because there was just enough background to catch my up so I wasn't confused by who's who and the plot still managed to move forward.  If you missed the first issue you can still enjoy this so pick it up.

SUICIDE SQUAD #22, writer: Ales Kot  art: Patrick Zircher
WOW!  I'd heard this was good but I didn't realize just how good.  I could care less about this stack of characters but Kot made me have fun not caring.  This is his third issue and I am hooked.   If the series doesn't get sucked into a massive crossover event I might have to pick up the trade.  As a single issue, this was excellent and highly recommended.

... as a side note, I skimmed the last six issues of Thunderbolts too.  What a load of crap!  Why is Electra sleeping with the Punisher?  I couldn't get past the fact that the characterization was based upon plot points instead of what's been done with the characters in the past.  Since Suicide Squad and T-Bolts are basically the same concept... The Squad wins. 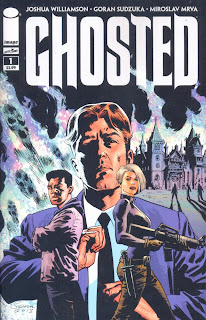 ULTIMATE COMICS ULTIMATES #27,
This is good in a conceptual way.  Ultimate Tony Stark has his skull cracked open, brain exposed while Reed Richards digs around his brain for an Infinity Gem for the entire issue.  As a concept it was great and highly enjoyable.  As for the why or what the heck was going on... I couldn't tell you.  What did Jim always say?  Oh yeah, Read It On The Stands.

BALLISTIC #1, writer: Adam Mortimer art: Darick Robertson
The only question is: would this have worked without Robertson's art?   I think the answer is yes.   The story is simple enough everything is organic.  The buildings, the cars, the guns, everything.  It's basically a noir hashing of the old Plasm comic (for those old enough to remember that book).  It's got great art and the setup is solid so it's worth another issue.

It's a solid setup in which we meet all the cannon fodder that will be killed in future issues.  It's a mash up of "The Haunting of Hill House" and "Hell House" which are both outstanding horror novels.  If this can capture a fraction of the spooks in those books then this will be good.  As for the first issue, an excellent start and I can't wait to see more.

So, for the most part it was a good week.  Then again, I only read one DC and one Marvel book so you knew it was gonna be good.
Posted by Lee at Tuesday, July 16, 2013