Indies Preview for August Part 1 of 2

Lee: Ok, this is late by a couple of days and really corresponds to last months previews but it's been crazy around here lately.  Work has been nuts and this is the best I could do.  As always, lots of good stuff and a surprisingly amount of good stuff from Boom!
Thomm: Crazy here, too.  Vacation season's a real pain.  In fact, I lost track of the fact that we hadn't done this. 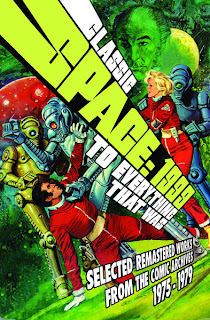 Archaia Entertainment
Classic Space: 1999-To Everything That Was SC by (w) Andrew E. C. Gaska (a/c) Gray Morrow
The sci-fi classic series continues! September 13, 1999: An atomic accident causes the moon to be blown out of orbit and hurled into the unknown, the survivors of the lunar base stationed there launched toward their destiny, and adventures, across the stars. Set in the continuity of the original series, Classic Space: 1999-To Everything That Was fills in the gap between the first and second seasons of the gothic science fiction television series Space: 1999, offering an exciting narrative of events that occurred behind the scenes. This collection is a celebration of the Space: 1999 comics of yesteryear, reprinting the best of the Charlton Comics series, the British Look-In issues and Annuals, with an artistic storytelling twist! It utilizes over a dozen rare Space: 1999 painted artworks as chapter breaks, and is adorned by a previously unpublished Gray Morrow Space: 1999 cover painting. Originally intended for the next issue of the 1977 cancelled Charlton comic series run, this beautifully restored image had until now only seen print in the late '70s as a puzzle! 304 pgs, FC, 7x10, $29.95
Lee:  This hits my weakness for cheesy 70's TV sci-fi.  I remember seeing the original series as a kid and loving it.  Then I picked up the DVDs and... well I should have stuck with my memories. But it's a great concept and Morrow was one of the greatest photo-realistic artists from the days when you needed skill and not a computer to do so.
Thomm: I was never into this show as a kid and from what I've seen since I understand why.  This is purely a nostalgia trip. 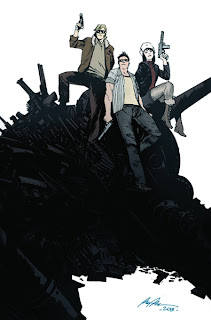 Boom! Studios
3 Guns #1 (of 6) by (w) Steven Grant (a) Emilio Laiso (c) Rafael Albuquerque
the sequel to 2 guns, now a major motion picture starring denzel washington and mark wahlberg! Trench was a deep¬cover DEA agent. Steadman was an undercover Naval Intelligence officer. Now, after racing headlong across the Southwest, desperately outrunning Feds and mobsters alike while trying to clear their names, Trench and Steadman are pulled into another impossible situation: brokering gun deals between the Russians and anti¬government revolutionaries... from opposite sides. And little do they know, a Third Gun has her eyes set on the ultimate prize - and she won't go down without a fight. Creator Steven Grant (Damned, Punisher: Circle Of Blood) returns along with original series cover artist Rafael Albuquerque (American Vampire) and interior artist Emilio Laiso (Hack/Slash) for more action¬comedy thrills! $3.99
Lee: Jim and I read the 2 Guns, the first series, and really enjoyed it.  Someone must have listened because now it's a movie.  Yes, this is a cash grab to tie in with the movie but Grant is a proven writer so I know it'll be good.
Thomm: You guys liked it.  The concept didn't appeal to me.  Kind of stale to me.  I am curious about he ee cummings presentation of the movie stars in the blurb. 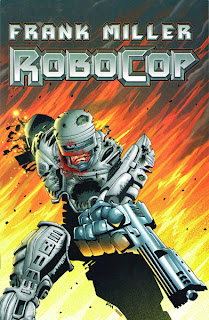 Frank Miller's Robocop SC by (w) Frank Miller, Steven Grant (a/c) Juan Jose Ryp
For the first time in years, fans will get the chance to see Robocop 2 as Frank Miller envisioned. This series adapts the famous, Frank Miller Robocop 2 screenplay into an epic 9¬issue run - full of malicious black humor, off¬the¬wall violence, and insanity! This book packs all the punches that fans craved from the sequel and so much more! Collects Frank Miller Robocop #1-9, originally published and collected by Avatar Press. 208 pgs, FC, 7x10, $19.99
Lee: I don't know if this is any good but I really want to see Ryp's art.  That's enough of a selling point for me.

Thomm: Well, if you like blood dripping everywhere, Ryp's your man.  Considering the subject it's a fair bet you'll get plenty of that in this book, in great detail.  I enjoyed the first Robocop movie.  I should probably read this, as I'm sure it's much better than the sequel movie. 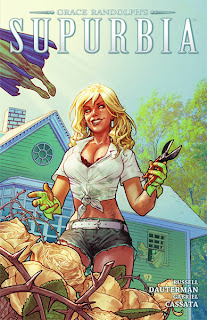 Grace Randolph's Supurbia Vol. 02 SC by (w) Grace Randolph (a) Russell Dauterman (c ) StTphane Roux
The fan¬favorite phenomenon returns with new stories of sex, lies, and...superpowers! Meet the Meta Legion, the world's foremost faction of crime¬fighting capes. But what happens when the masks come off and the heroes are faced with the sordid problems of everyday life in the suburbs? The members of the Meta Legion decided to protect their families and loved ones from their enemies by sequestering them in one quiet suburban neighborhood. But just because they've banded together, doesn't mean they like each other... From rising star writer Grace Randolph (Nation X) and hot new talent Russell Dauterman, Grace Randolph's Supurbia is a unique new twist on the superhero genre that appeals to both die¬ hard fans and readers completely new to comics. Don't miss out on what Bleeding Cool called The Superhero Comic We've Been Waiting For! Collects Supurbia Vol. 2 #5¬8. 112 pgs, FC, 7x10, $14.99
Lee: Jim has been sending me this series in single issues and against my better judgement I've been loving it.  Briefly, Justice League analogues do their best Desperate Housewives.  Lots of soapy good drama and plenty of action too.  It's good stuff.
Thomm: Sounds like a middle class Noble Causes.  Now that was a great series.  If this is anywhere close to that it should be an excellent read.  Looks pretty, too. 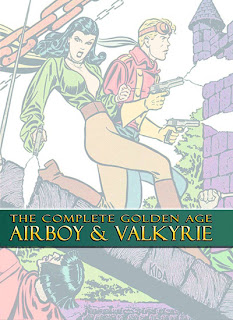 Canton Street Press
Complete Golden Age Airboy and Valkyrie HC by (A) Fred Kida
From the pages of Air Fighters Comics and Airboy Comics comes The Complete Golden Age Airboy and Valkyrie! Inspired by Milton Caniff's Terry and the Pirates, Airboy and Valkyrie had a love/hate relationship that brought tension and drama to their stories. The Fred Kida stories collected in this volume inspired comic greats such as Alex Toth. For the first time, their complete adventures will be digitally restored and reprinted in one volume. This volume collects Air Fighters Comics v1 #12, v2 #2, v2 #7, and Airboy Comics v2 #12, v3 #6 and #12, v4 #10, v9 #2. Introduction by Timothy Truman. 136 pgs, FC, 8x11, $24.99
Lee: This is my monthly GA fix!  These stories are pretty good action adventure tales and Kida's art is fantastic too.
Thomm: I'd almost get it for the Tim Truman intro.  Loved the version he worked on back in the '80s. 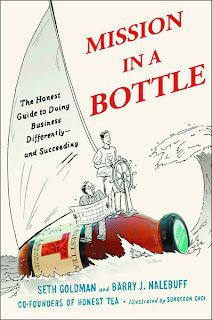 Crown Books
Mission in a Bottle GN by (w) Seth Goldman, Barry J. Nalebuff (a/c) Sungyoon Choi
In an incredibly fun and accessible two-color graphic-book format, the cofounders of Honest Tea tell the engaging story of how they created and built a mission-driven business, offering a wealth of insights and advice to entrepreneurs, would-be entrepreneurs, and millions of Honest Tea drinkers about the challenges and hurdles of creating a successful business - and the importance of perseverance and creative problem-solving. 304 pgs, PC, 6x9, $23.00
Lee: And, after my GA fix I need my fix of reality.  If you've ever been in business for yourself, or just wondered what it takes then this is the book for you!  I'm betting it will be fun.
Thomm: Books about succeeding in business and reality have never been joined in my mind.  They're usually a fantasy tale of selective memory.  This seems like just such a tale. 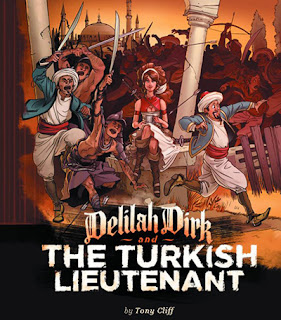 First Second (:01)
Delilah Dirk & Turkish Lieutenant GN by (w/a/c) Tony Cliff
Lovable ne'er-do-well Delilah Dirk is an Indiana Jones for the 19th century. She has traveled to Japan, Indonesia, France, and even the New World. Using the skills she's picked up on the way, Delilah's adventures continue as she plots to rob a rich and corrupt Sultan in Constantinople. With the aid of her flying boat and her newfound friend, Selim, she evades the Sultan's guards, leaves angry pirates in the dust, and fights her way through the countryside. For Delilah, one adventure leads to the next in this thrilling and funny installment in her life as a globetrotting adventurer. 172 pgs, FC, 6x9, $15.99
Lee: This looks to a fun, all ages adventure with a strong female lead.  Clarification, strong female lead that doesn't appear to moonlight as a stripper.  Having young ladies in my house, I am always willing to support titles like these.  It doesn't hurt that the art looks great too.

Thomm: I'd be more supportive if there wasn't such a lack of historical context.  The Ottoman Empire was a modern government, albeit a monarchy, in the 19th Century.  There wern't a bunch of guys running around in baggy pant.  And the city was Istanbul by then.

The conclusion tomorrow.
Posted by Lee at Tuesday, July 02, 2013